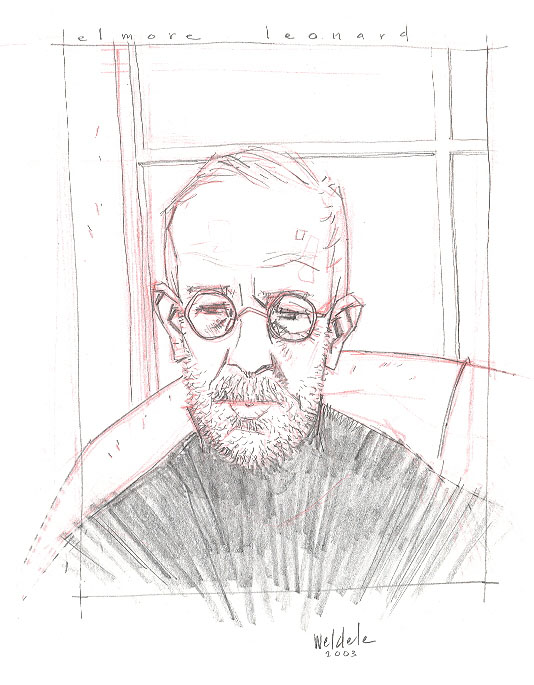 Over at the Atlantic dig this from Elmore Leonard (and stick around to watch the video):

THE DAY VICTOR turned twenty he rode three bulls, big ones, a good 1,800 pounds each—Cyclone, Spanish Fly, and Bulldozer—rode all their bucks and twists, Victor’s free hand waving the air until the buzzer honked at eight seconds for each ride, not one of the bulls able to throw him. He rolled off their rumps, stumbled, keeping his feet, and walked to the gate not bothering to look at the bulls, see if they still wanted to kill him. He won Top Bull Rider, 4,000 dollars and a new saddle at the All-Indian National Rodeo in Palm Springs. It came to … Jesus, like 200 dollars a second. That afternoon Victorio Colorado, the name he went by in the program, was the man.

He left the rodeo grounds as Victor to celebrate with two Mojave boys, Nachee and Billy Cosa, brought along from Arizona when the boss, Kyle McCoy, moved his business to Indio, near Palm Springs. The Mojave boys handled Kyle’s fighting bulls, bringing them from the pens to the chute where Victor, a Mimbreño Apache, would slip aboard from the fence, wrap his hand in the bull rope tight as he could get it, and believe he was ready to ride. He’d take a breath, say “Let me out of here,” and the gate would swing open and a ton of pissed-off bull would come flying out.

“His mind made up,” he told the Mojave boys at Mi Nidito in Palm Springs, “to kill anybody’s on his back. See, he behaves in the chute. What he’s doing, he’s saving his dirty tricks till he has room to buck you off and stomp you, kick out your teeth.”