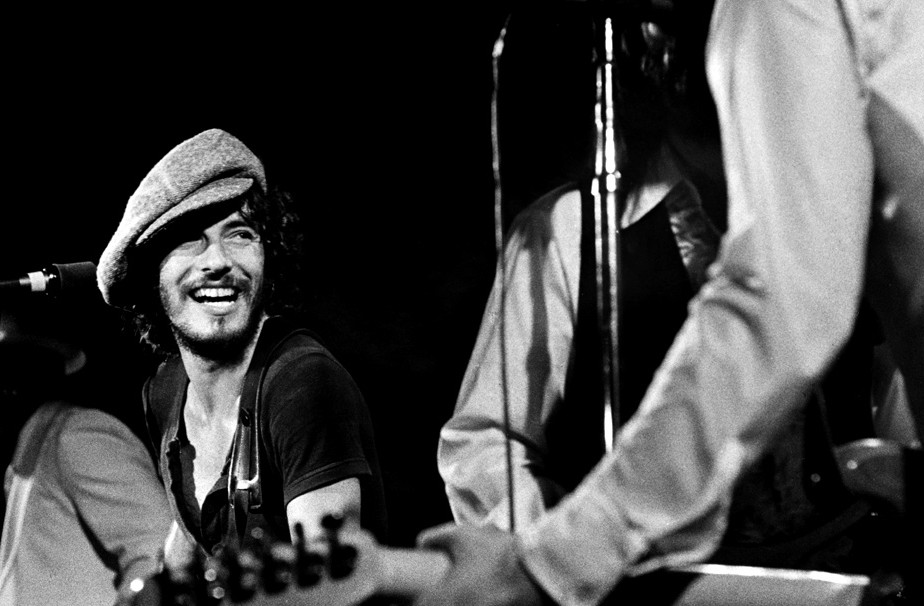 David Remnick has a long profile on Bruce Springsteen in the New Yorker:

Early this year, Springsteen was leading rehearsals for a world tour at Fort Monmouth, an Army base that was shut down last year; it had been an outpost since the First World War of military communications and intelligence, and once employed Julius Rosenberg and thousands of militarized carrier pigeons. The twelve-hundred-acre property is now a ghost town inhabited only by steel dummies meant to scare off the ubiquitous Canada geese that squirt a carpet of green across middle Jersey. Driving to the far end of the base, I reached an unlovely theatre that Springsteen and Jon Landau, his longtime manager, had rented for the rehearsals. Springsteen had performed for officers’ children at the
Fort Monmouth “teen club” (dancing, no liquor) with the Castiles, forty-seven years earlier.

The atmosphere inside was purposeful but easygoing. Musicians stood onstage noodling on their instruments with the languid air of outfielders warming up in the sun. Max Weinberg, the band’s volcanic drummer, wore the sort of generous jeans favored by dads at weekend barbecues. Steve Van Zandt, Springsteen’s childhood friend and guitarist-wingman, keeps up a brutal schedule as an actor and a d.j., and he seemed weary, his eyes drooping under a piratical purple head scarf. The bass player Garry Tal-lent, the organist Charlie Giordano, and the pianist Roy Bittan horsed around on a roller-rink tune while they waited. The guitarist Nils Lofgren was on the phone, trying to figure out flights to get back to his home, in Scottsdale, for the weekend.

Springsteen arrived and greeted everyone with a quick hello and his distinctive cackle. He is five-nine and walks with a rolling rodeo gait. When he takes in something new—a visitor, a thought, a passing car in the distance—his eyes narrow, as if in hard light, and his lower jaw protrudes a bit. His hairline is receding, and, if one had to guess, he has, over the years, in the face of high-def scrutiny and the fight against time, enjoined the expensive attentions of cosmetic and dental practitioners. He remains dispiritingly handsome, preposterously fit. (“He has practically the same waist size as when I met him, when we were fifteen,” says Steve Van Zandt, who does not.) Some of this has to do with his abstemious inclinations; Van Zandt says Springsteen is “the only guy I know—I think the only guy I know at all—who never did drugs.” He’s followed more or less the same exercise regimen for thirty years: he runs on a treadmill and, with a trainer, works out with weights. It has paid off. His muscle tone approximates a fresh tennis ball. And yet, with the tour a month away, he laughed at the idea that he was ready. “I’m not remotely close,” he said, slumping into a chair twenty rows back from the stage.

It's a strong story - the level of depth on Springsteen's father and the thread of mental instability is more than I've usually seen.

Thanks for sharing. One of the better "quick" summaries of Bruce's career. Fine writing, without getting the author's personality too much invested. Liked the interplay with Van Zant. Really catches the semi-religious feeling of recent tours, and explains that it's deliberate --- and not just because of showmanship. It's all about the music, and the place of the music in historical terms.