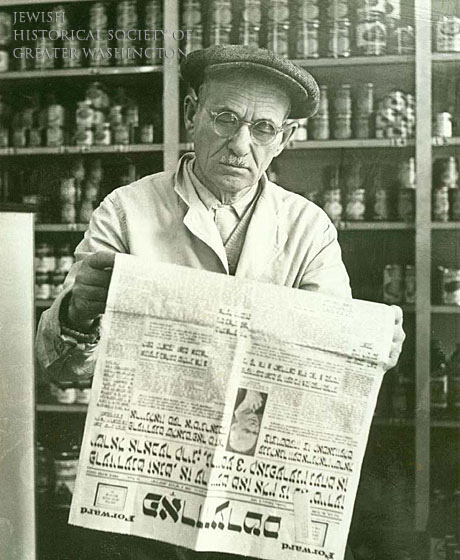 Here is a 1970 story by I.B. Singer. It was written in Yiddish and recently translated by David Stromberg:

Being a writer for a Yiddish newspaper means wasting half the workday on people who come to request advice or simply to argue. The manager, Mr. Raskin, tried several times to bring this custom to an end but failed repeatedly. Readers had each time broken in by force. Others warned that they would picket the editorial office. Hundreds of protest letters arrived in the mail.

In one case, the person in question didn’t even knock. He threw open the door and before me I saw a tiny man wearing a black coat that was too long and too wide, a pair of loose-hanging gray pants that seemed ready to fall off at any moment, a shirt with an open collar and no tie, and a small black spot-stained hat poised high over his brow. Patches of black and white hair sprouted over his sunken cheeks, crawling all the way down to the bottom of his neck. His protruding eyes—a mixture of brown and yellow—looked at me with open mockery. He spoke with the singsong of Torah study:

[Photo Via: It’s Never Summer; Half a Day on Sunday]

This was wonderful. Thanks for the heads up.