< Jock Archives: Hey, Mike Burke, Don’t You Wish You Were the Boss of the Mets?      Million Dollar Movie >

I Don’t Feel Funny, but I AM Funny 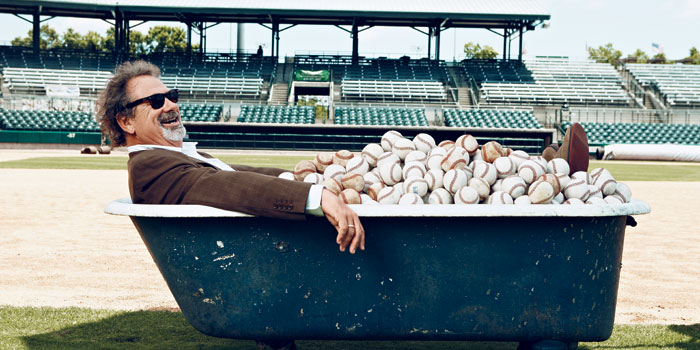 Head on over to Garden and Gun for Pat Jordan’s latest–this one is on Mike Veeck:

“I know a little bit about anger,” Mike Veeck tells me. “I have a passing acquaintance with anger, too,” I reply. We discuss how anger can be an energy source. Some use it in destructive ways. Beat the wife, the kids, the dog; blow planes out of the sky. Some put it to better use. Throw the money changers out of the temple, demand justice for the weak, write a book, pitch a no-hitter, make people laugh. That last one is Mike Veeck’s cause. He’s demented about making people laugh.

Veeck (as in wreck, as the title of his father’s autobiography puts it) is sixty-one, getting round, with eyes like a ferret, a goatee, and dark hair I know he dyes. He has a limp. Once on the fourteenth fairway, a guy in a golf cart reached for a lighter for his cigar and ran over him. Veeck wrote a column about it for the Lowcountry Sun, a monthly paper distributed around Charleston, South Carolina. He published the guy’s name and phone number so people could berate him for breaking Veeck’s leg. Funny, angry, or both?

We’re sitting under a hot noonday sun in the exposed left-field bleachers of Joseph P. Riley, Jr. Park, home of the minor-league Charleston RiverDogs, the single-A affiliate of the New York Yankees of which Veeck is part-owner and president. A groundskeeper manicures the field below. A few kids are tidying up the stadium for a 5:05 p.m. game against the Delmarva Shorebirds. Veeck and I are catching up. We’ve known each other fifteen years but don’t see each other much. He travels a lot, to conventions and conferences, where he makes people laugh.

i played a festival gig at that stadium in Charleston. it was pretty cool. this was probably 1997...