< Second Batter Up Cause the First Got Served      Somber News > 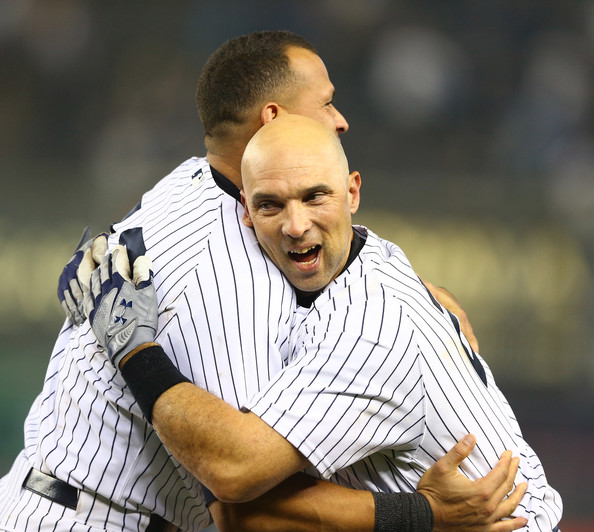 Raul Ibanez spent the regular season compiling big hits, but he saved his most spectacular heroics for October. Now, he stands among the Yankees’ legion of immortals as one of the most clutch performers in the franchise’s postseason history.

The Yankees have had no shortage of October heroes, but with two mighty blows, Ibanez thrust his name to the top of the list. By homering to tie the game in the ninth and then following up with a walk-off encore in the 12th inning, Ibanez racked up the highest cumulative Win Probability Added (WPA) in the team’s postseason history, surpassing Charlie Keller’s clutch hitting in game four of the 1941 World Series. In addition, Ibanez’ epic performance also cracked the top-five for all of baseball, and made the 40-year old slugger the first player to hit a homerun in both the ninth inning and extra innings of the same postseason game. In addition to rescuing the Yankees from a pivotal game-three defeat, Ibanez also saved Joe Girardi from having to face intense scrutiny for using him as a pinch hitter for Alex Rodriguez. In addition, Arod was able to spend the post game magnanimously applauding his teammate instead of having to answer unfair questions about his perceived inability to produce in the postseason. Of course, the irony is that if there was one man in the clubhouse who knew exactly how Ibanez felt, it was Rodriguez.

Before Ibanez’ game-tying homerun in the ninth inning, the last hitter to erase a postseason deficit in his team’s final turn was, you guessed it, Alex Rodriguez. In 2009, Arod actually accomplished the rare feat on two occasions: the first against Joe Nathan in game two of the ALDS and the second against Brian Fuentes in game two of the ALCS. Only 32 postseason home runs have helped a team tie or take the lead when trailing in the ninth inning or later, and Johnny Bench and Arod are the only players to do it twice.

It amusing to note that Rodriguez has compiled three of the top-10 WPA ratings in the Yankees long and illustrious postseason history (he also owns the highest WPA in the franchise’s regular season history). Although his struggles in the current ALDS are undeniable, the relentless characterization of Arod as an unclutch performer remains one of the great mysteries of irrational fandom. Fortunately, Joe Girardi isn’t as fickle as far too many Yankee fans. If he was, Raul Ibanez, who batted .057 in 60 plate appearances over a 24-game span at the end of the season, probably wouldn’t even be on the postseason roster. That’s something to think about the next time you feel the urge to overreact to a small sample.

Great job, William. Yes, the hatred of Alex is something that will never relent. A co-worker described Ibanez's game-tying home run as a "take that, Alex" moment. "I'm glad he stuck it to A Rod." What can you do with that?

I don't think many would deny that A Rod has had his moments in the post season for the Yankees (most of them in 2009). But it's hardly irrational to point out that overall he has been sub-par, at best.

[2] It is irrational, because overall, he has been above average, at worst.