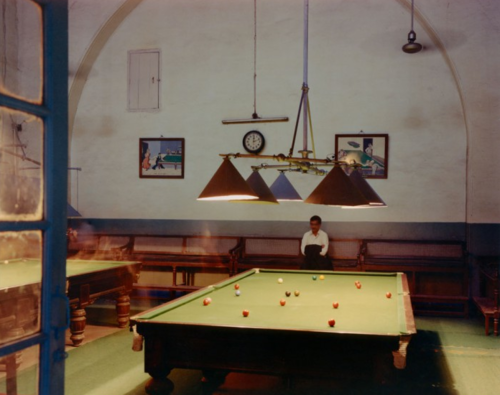 Joe McNeill’s mother used to say, there’s a Mort Berger in every town, and she may have been right. But those of us who knew him in the summer of 1962 liked to think she was wrong and secretly hoped he was unique. Berger was the proprietor of the only pool hall I can ever remember seeing in our small town in Fairfield County, Conn. He was a Jew from South Philadelphia who spoke out of the side of his mouth. On windy days he stuck bobby pins in his hair, which was deep reddish brown, the color of an Irish setter’s. But, at 33, he didn’t have much to stick bobby pins in. To compensate, Berger let the little patch of hair at the base of his neck grow until it would reach far down his back if he let it—which he didn’t. Instead, he combed it forward over his brow where he teased it into a tuft like a rooster’s comb. Actually, Berger resembled a rooster more than anything. He had watery blue eyes, a pointy nose and the gently curving, bottom-heavy build of a Rhode Island Red. He waddled.

Berger’s greatest fear was that a strong wind might come along and reveal his artifice. To defend against this possibility he ventured outside the pool hall as infrequently as possible. This tended to make his pale and mottled redhead’s skin so opaque that veins were visible beneath it. Whenever he did appear outside he walked about with his hand flattened over the top of his head like a man who had misplaced a migraine. Finally, in desperation, he had resorted to bobby pins. It was hard for anyone, at first, to talk casually to Berger without breaking up at the sight of the bobby pins, but after a few withering looks one learned to ignore them. The only person I ever heard question Berger about them was a college freshman who wandered into the pool hall one day, challenged Jack the Rat to a game of dollar nine ball and then, pointing to Berger’s hair, asked, “How come you got bobby pins in your head?” The place fell mute. It seemed even the skidding billiard balls froze in midflight. Berger’s face took on the color of his tuft. He fixed a beady-eyed stare on the offender and said in a voice the recollection of which still sends shivers down my spine, “You, my friend, are banished for life.” The humiliation! Worse even than Kant’s categorical imperative! It would have been better for the boob if Berger, yarmulke over his tuft, prayer shawl about his shoulders, had intoned the Hebrew prayers for the dead.

And for more on pool, here’s another gem from Patty, written twenty-four years later, “The Magician”:

At midnight on a bitterly cold January 15 the lobby of the Executive West Hotel near the Louisville, Kentucky, airport was crowded with men and a few women, all waiting anxiously for the guest of honor.

A man in a yellow windbreaker came through the front door and walked toward the registration desk. A murmur rose from the crowd. Everyone stared at him, a small brown man with slitlike eyes, a wispy Fu Manchu moustache, and no front teeth. He wore a soiled T-shirt and wrinkled, baggy jeans. He moved hunched over, his eyes lowered.

People clustered around him. Men flipped open their cell phones and called their friends to say “He’s here!” They introduced him to their girlfriends. The man looked embarrassed. Another man thrust his cell phone at him and said, “Please say hello to my son; he’s been waiting up all night.” The small man mumbled a few words in broken English. Then the hotel clerk asked him his name. He said, “Reyes.” Someone called out, “Just put down ‘the Magician.'”

Efren Reyes, fifty, was born in poverty, the fifth of nine children, in a dusty little town in the Philippines without electricity or running water. When he was five, his parents sent him to live with his uncle, who owned a pool hall in Manila. Efren cleaned up the pool hall and watched. He was fascinated by the way the players made the balls move around the table and fall into pockets—and by the way money changed hands after a game. At night he slept on a pool table and dreamed of combinations. He had mastered the game in his head before he finally picked up a pool cue, at the age of eight. He stood on a pile of Coke crates to shoot, two hours in the morning and two hours at night. At nine he played his first money game, and at twelve he won $100; he sent $90 home to his family. Soon he was the best pool shooter in Manila. His friends would wait for him in the pool hall after school, hand him his cue when he walked in the door, and back him in gambling games. He was the best pool shooter in the Philippines when he quit school, at fifteen. By the time he was in his twenties, no one in the Philippines would play him any longer, so he toured Asia. He wrote down in a notebook the names of the best pool shooters in the world, and proceeded to beat them one by one. He became a legend. People who had seen him play recounted the impossible shots he had made. They called him a genius, the greatest pool shooter who had ever lived. Even people who had never seen him play, including many in the United States, soon heard the legend of Efren Reyes, “the Magician.”