That’ll Be the Day 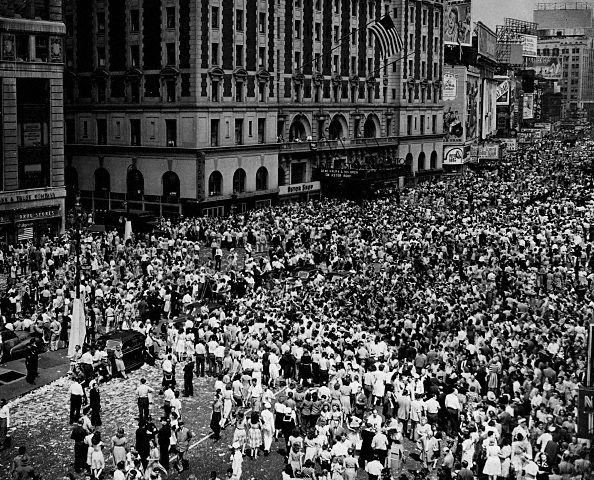 It’s a perfect miniature of his work–a poem, really–his book of revelations:

An air-raid warden we know, a young woman who holds down the desk in her sector headquarters in Greenwich Village twice a week from nine to midnight, is occasionally visited by the policeman on the beat. This policeman, who is elderly and talkative, dropped in the other night, sat down, grunted, placed his cap and nightstick on the desk, and said, “I’m a man that believes in looking ahead, and I been walking around tonight thinking over the biggest police problem this great city will ever have; namely, the day the war ends. I got it all figured out. I know exactly what’ll happen. Half an hour after the news gets out there won’t be a thing left in the saloons but the bare walls. Then the people will tear down the doors on the liquor stores and take what they want, a bottle of this, a bottle of that. Then they’ll go to work on the breweries; they’ll be swimming in the vats. Old ladies will be howling drunk that day. Preachers won’t even bother to drink in secret; they’ll be climbing lampposts and quoting the Bible on the way up. And some young fellow will trot up to the Central Park Zoo and break the locks. The elephants will be marching down Fifth Avenue, and the lions and the tigers, two by two; we’ll be six weeks getting the monkeys out of the trees. And they’ll ring all the church bells until they crack; they’ll jerk the bells right out of the steeples. And you know that big sireen in Rockefeller Center; somebody will get hold of that, and he won’t be torn loose until they shoot him loose. And they’ll unscrew the hydrants all over town; the water will be knee-deep. And people will be running around with their shoes off, wading in the water and singing songs. I can see the whole scene. And the ferryboat captains will give one toot on their whistles and run the ferryboats right up on dry land, and the bus drivers will run the buses right into the water. And the passengers will take charge of the subway trains, and they’ll run them right up into the open air. You’ll hear a racket and a roar, and you’ll look around, and here’ll come a subway train shooting right through the pavement. And husbands will be so happy they’ll beat their wives, and wives will beat their husbands, and the tellers in banks will gang up and beat the bank presidents, and and the ordinary citizens will tear down big buildings just so they’ll have some bricks to throw.” The policeman laughed and slapped his knee. “What a day of rejoicing!” he said. “What a police problem! I hope to God I live to see it!”