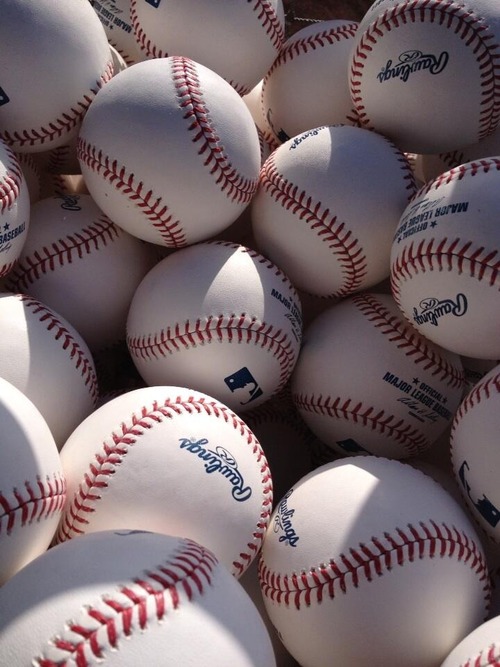 The Rangers welcome the Astros to the American League to kick-off the 2013 season.

Wow, the Astros in the AL, okay. Nice to wind down a busy holiday with a game, especially after that horrific injury in the Duke-Louisville game. Man, that was one of the most gruesome things I've seen in basketball or any sport.

But oh my god..who is this announcing the ESPN game..5 mins in and I'm already dying.

But no one asked me, so

[3] Because Milwaukee's move to the NL was a boonswaggle for Bud Seelig and nothing more.

What's wrong with this picture?

[6] I hear ya..BUT, end of season I'll put down an ichi-man that Wells' production surpasses the rookie.

I'm WAYYY less enthused by Travis Hafner..oh well, this is a day to celebrate!

[1] I didn't see it, but I started to read the recap and the description of the injury horrified me so much I stopped reading. Hope that working 50 feet in the air over set will help me forget the image in my mind now, while also really hoping that kid fully recovers. I know far worse things have happened, but that doesn't diminish the fact that this was pretty bad.

[6] My man. Wells said. Like, where did they find this crew? Going to be a summer of sombre bomber.

Bob Tuley died. Most underrated of Yanks, category. 1958 Cy Young when it for best MLB thrower. Hear that? Cy Young! How many know his name? Game 5 of 1958 series, Yanks down 3-1. Lost seven game series to Braves in 1957, Burdette won 3 games. Ellie played left. Jerry Lumpe at third. Jerry Lumpe. A blast from the past. Turley who had lost game 2,1/3 of an inning was all he lasted, pitched a complete game and drove in two runs. Aaron, Matthews, Schoendienst for Braves. Mantle, Berra, Slaughter, Ford and Casey. Turley earned a save in game 6 with Yankees still facing elimination. An extra inning affair, Yanks had scored two in top of 10th. Braves came back with one in bottom. Threatening, with Aaron on 3rd, he got Frank Torre to line out. In game 7, he relieved Don Larsen in the 2nd, pitched 6.1 innings for the win. Finished seried 2-1 with a save. How about that Sports Fans? And he won the Hitchcock belt, an award given at the time for the best professional athlete. Great Series. Great player.

As for the Yankess, dead last.

2013 is looking more and more bleak each day, but still - ya gotta love the energy of opening day!

Today is not a day for predictions, but I'll do it anyway. Yanks 88-74...which will be more than enough to win the division.

And with that, I'm off to the Bronx!

Anyone figure out a good way to watch Yankee games without cable? I live in the blackout area for MLB.tv. Cable costs like $80/month and I'd only get it for the games. Seems like a lot. I've read some stuff about getting MLB.tv and a remote IP or something so I can watch Yanks games lives.... sounds complicated. I wish MLB would just let me pay for blackout games or something...

Welcome Opening Day at last, both on the field and at the Banter!

As much as I enjoy old stories about old boxers, slices of life on the late-night subway, and bowl after steaming bowl of spaghetti carbonara, there's no substitute for seeing, playing, writing, smelling, savoring actual baseball. :)

Bart:
All right, you caught me. To speak
the plain truth, it's getting pretty
damn dull around here!