Now What Was I To Do? 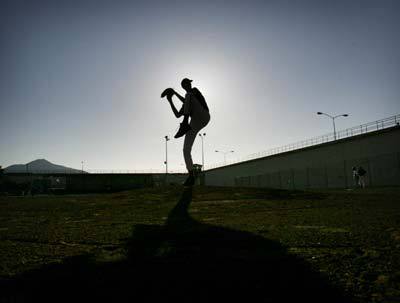 Over at Roopstigo, here’s the latest from Pat Jordan:

Vito Frabizio is 23 now. In 2009, when he was 19, the Baltimore Orioles signed him to a $130,000 bonus. “I was the best pitcher in the Orioles’ minor leagues,” he says. “Scotty McGregor (former O’s pitcher) told me I’d win the Cy Young Award one day.” He looks around, and then back at me, adding, “I’d always been in the right place at the right time. Now I’m here, the lowest of the low.”

Vito is sitting behind bars in the visiting room of the Yaphank, Long Island, minimum security prison on a fall day. The visiting room is crowded with men in green prison jumpsuits talking to women, some of them in low-cut blouses, who lean over to remind their men of what waits for them when they get out. The guards have put Vito in the far corner of the room so he can talk to me with a little privacy through the bars. He grips the bars with both hands and says, “The other prisoners can’t believe it. ‘You played baseball and robbed banks? Why?’” Actually, Vito robbed three banks to support his 20-bag, $200-a-day heroin habit.

Even in his prison-issued jumpsuit, with white socks and flip-flops that slapped against the floor when he walked toward me with that slouching, hangdog shuffle of prison cons, Vito is still a good-looking man. Just not that good-looking anymore. He has a jailhouse pallor — he’s been incarcerated for two years at this point — with the blemished skin of a needle junkie and tattoos, which can be seen in his police mug shots. There’s a naked woman in flames on his upper left arm. A heart and a cross adorn his upper right (throwing) arm. A Burmese python suffocates a tiger on his stomach. The word “Hollywood” is scrawled across his upper back. “I always had to be the center of attention,” he tells me. “The most popular. Class clown. Even in here I make people laugh so the time goes easier.” He also amuses them with glimpses of his pitching prowess of two years ago. He wets paper, molds it into a ball, and puts a sock over it, then shows his fellow cons his pitching motion. “Until the guards take the ball away,” he says. “Then I make another.”

Off topic, but if you guys are up or near a PC, tune in to the Rangers-Astros. Yu Darvish has retired 19 straight, 12 Ks through 7 and 2-thirds....

All zeros through 7 now.

Darvish done with a hit back through the box after 8 and 2/3 perfect.

Memories of Mike Mussina on this one.