BGS: There’s Something About Steve

More from our man Dexter. This one originally ran in the Philly Daily News on October 11, 1984. It appears here with the author’s permission. 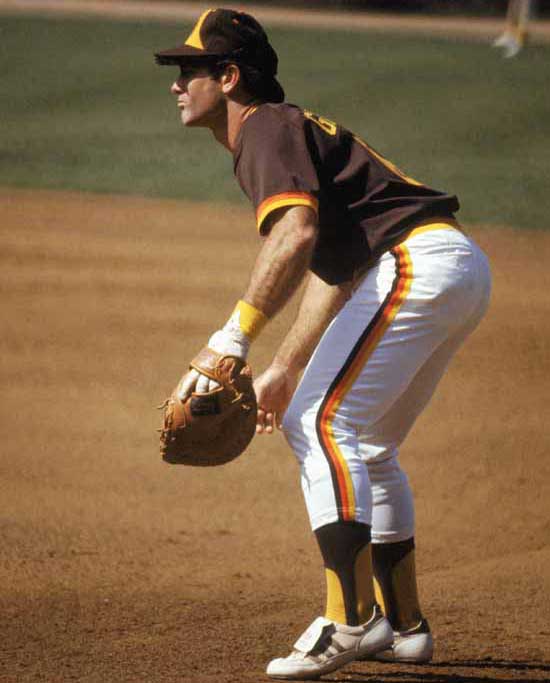 “There’s Something About Steve”

I don’t know how to tell you this, but I think my wife has a serious case for Steve Garvey. I know that must be embarrassing to hear, it’s certainly embarrassing to admit. I would personally rather come home and find her with egrets. I can’t say if it’s the boyish good looks that got to her, or the refreshing modesty or the way he wears his pants like his mother dressed him for school, but something is going on.

The first time I noticed it, the Dodgers were in the World Series. Steve played for them before he signed on with San Diego, and they beat the Yankees. My wife was a Yankees fan then – she will be again when George Steinbrenner buys enough people to win – and she listened to Garvey giving a post-game interview, refusing to take credit for a victory that had taken 25 guys pulling together to achieve. Yes, he talks like that.

She said, “That is the most disgusting human being I have ever seen. ” And I knew right there something was up. Word for word, that was what she used to say about me.

That, of course, was before we got married. A little of the magic has to leave after seven years, right?

Anyway, I thought it would pass. After all, her kidney stones did. And in fact after the series, we came to an unspoken understanding that the words Steve and Garvey were never to be heard, one after another, under our roof.

We didn’t use the expression first sacker, we even stayed away from the number six. We certainly never mentioned the Dodgers, even after Steve went to San Diego. But there are some things you can forgive and forget, and some things you can’t. And every time I wanted to say “first sacker” but stopped myself short, it hurt in a way I knew would never completely heal.

And it never did, because the old feelings came back the second I walked into the house last week and heard that Steve Garvey had just driven in five runs to tie the playoff series with the Cubs at two games each. He was being congratulated on television.

Steve smiled, a nice controlled smile, and said, “It was my pleasure. ” Then he said he couldn’t take credit for a victory that had taken 25 guys pulling together to achieve.

“He makes my skin crawl,” my wife said.

I stood in the door, stunned. “I thought I made your skin crawl,” I said, when I’d gotten myself together.

The night after that, the Padres came from three runs down to beat the Cubs and move into the World Series. Steve Garvey did not knock in five runs, but when I came in the door they were congratulating him anyway.

His teammates were pouring champagne over his head, and he had a controlled, good-natured smile on his face, and was waiting patiently for the microphone so he could say it takes all 25 people on a ball club to win.

“Have you ever seen him when he walks?” my wife said.

“You mean he doesn’t always hit a home run?” I said. Ha. Stuck her a good one there, right?

She shook her head. She said, “Anybody else, they toss the bat in the dirt and run to first base. Steve Garvey hands it to the bat boy. He looks him in the eye. And when he gets to first base, he always says something to the first baseman that makes them both smile.

“Sometimes,” she said, “he makes the umpire smile too. ”

“The smiles,” she said, “they last exactly four seconds.”

“What are you trying to tell me?” I said.

She said it was just that she couldn’t stand him. She said he probably had hair all over his back. She is supposed to hate that, but try pulling her out of the Great Apes exhibit at the zoo some time. She said the hair on his head was never out of place, not even sliding into home with the winning run.

“When he comes out of the dugout and tips his cap to the standing ovation,” she said, “he doesn’t put it back on, he fits it.”

She saw then that I was hurt, and tried to make it up to me. “You left a Coke in the freezer again last night,” she said. “It blew up and there’s little pieces of glass everywhere.” But there was no passion in it.

I smiled in a polite way. Not as polite as Steve Garvey would have smiled – Steve, of course, would have bought a new refrigerator and given the old one to orphans – but as polite as I can be when I see my wife complaining about another man.

I sat down at the table and fed a quarter of a pound of butter to the dog. I burped. The dog burped. I spilled spaghetti in my lap. She fussed, but there was no passion.

It is just something I’ll have to wait out.

On national television, Garvey was giving the credit to his teammates. ”Aulk,” she said. “Aulk.” That is a noise to simulate throwing up.

And in my worst nightmares, it never occurred to me that she could make it for somebody who is nothing like me at all.