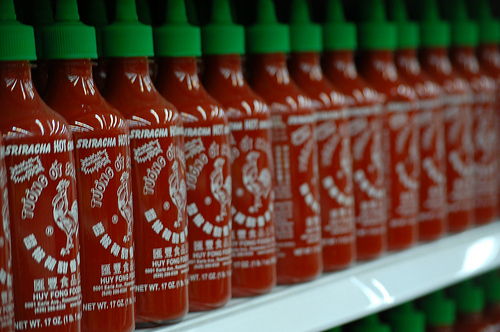 There’s only one rooster.

Love that stuff.
A couple of dashes and some cilantro leaves does wonders for reg'lr old chicken soup.

I've got 3 bottles at all times: 1 regular at work, 1 regular at home and 1 bottle I call 'The Devil's Cock', mixed with Dave's Ghost Pepper Insanity Sauce ...

I've heard of Dave's Ghost Pepper...I need to find me some.

Got mine off of Amazon, though I'm sure there are some places to get it locally in NYC.

Have you tried any of Dave's other Insanity sauces (or other extracted hot sauces)?

They're really on an entirely different plane of heat than sriracha.

For reference, Sriracha is (from what I can find) somewhere around 2200 scoville units (how spicy things are measured), about 1/2 as spicy as a jalapeno.

Dave's Original Insanity is somewhere around 180,000 scoville units (36x jalapeno), which is some ridiculous fire and was once probably the hottest sauce on the planet, but it was king back in the 20th century, when people thought that habaneros were the shizzle.

Nowadays, there are a good fistful of peppers hotter than that and Dave's Ghost Pepper Insanity sauce, which clocks in at about 650,000 scoville units, isn't even the top end of the spectrum.

If you're a heat freak, I think it's fantastic (I'm a huge fan of Dave's generally neutral flavor profile approach with his sauces), but it's more like a drug (mmmm, endorphins) than a cooking compliment.

And lord help you if you wear contacts and don't wear gloves ...