On the Fame of a King 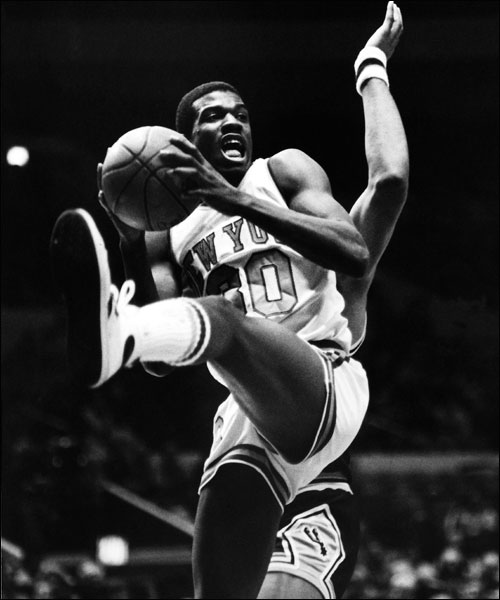 I wasn’t courtside for either of Bernard King’s consecutive 50-point games in 1984 (the Knicks won both), or the 60-pointer the following year (a game they lost). As a Knick freak, I feel as if I must have been, but the calendar says otherwise. I was in Miami. But I do remember that a few years later, when I interviewed him for The Miami Herald one day in an empty Garden before practice, when I tried to bring up what had happened back in Utah he told me, quite emphatically, that we weren’t going to go there.

I had to try. Maybe, as a sportswriter, I shouldn’t have. But I’ve never been good at separating the sportsman from the man when it comes to his treatment of women, whether it’s Bobby Cox (shoe-in for the MLB Hall of Fame, 2014), whose wife retracted the charges she’d filed about how he’d hit her in 1995, as long as Bobby undertook “violence counseling,” or Michael Irvin (inducted into the NFL Hall of Fame, 2007), whose parties in 1996 at that Texas motel were intense enough for a policeman to take out a hit on Irvin’s life. (True, there was no evidence that either of the “topless models” who partook of his regular parties was coerced; it was just the cop’s common-law wife whom Irvin allegedly threatened if she testified about said parties.)

In team sports, hall of fame inductions are the penultimate reward, outranked only by a ring (ask Patrick Ewing, who would gladly give up the Hummer he received on his appreciation night [the car kind, not the Gold Club kind; see court testimony, 1999], and probably his right leg, to have one). They are generally judged by statistics.

These are Bernard King’s statistics as a member of the Utah Jazz: five felony forcible sexual-assault charges; three for forcible “sodomy,” two for forcible “sexual abuse.” Convictions after the arrest? Just one, after King pled down to misdemeanor to “Attempted Forcible Sexual Assault.”

I do not pretend to know what happened in Utah. I do know that, reportedly, he was passed out from the use of alcohol after police subsequently went to his apartment after the woman’s complaint. He reportedly pled down after six different lie-detector tests said that he was telling the truth when he said he had no recollection of what happened that night.

I do know that alcohol sometimes allows inner demons to emerge. And that, never having had a multi-millioned career at stake over the actions of a drunken evening when I had acted feloniously, I can easily imagine pleading down, given that the difference between a felony and a misdemeanor could be fairly significant for my career. His sentence was suspended, and he underwent treatment for alcohol in California. He came home and went to meetings. And five years later, became the basketball player he’d once promised to be. He averaged 33 points a game in 1985 for New York. The Knicks finished that season 24-58.

He would play for seven teams (twice for the Nets). None won a ring.

Then, in 1994, now 37, one year after he’d retired, according to a report in the Associated Press, he was arrested for allegedly choking a 22-year-old woman while intoxicated. The wire-service account states that when police arrived, King was asleep; that he was charged with third-degree assault, and that the woman was treated at New York Hospital.

In 2004, now working for Bruce Ratner, King was arrested and charged with three counts of assault and one count of harassment after security at a hotel in lower Manhattan were alerted to alarming noises in a hotel room at 4:30 in the morning. The court report, according to the AP, said that King’s wife “suffered a cut with bleeding, and bruises, swelling and redness to her eye and forehead.”

The New York Daily News’ account , citing her “swollen” face, read, in part, “‘He pushed me down to the floor three times’” a bruised and trembling Shana King told cops, according to court documents. ‘This has got to stop. I want him arrested.'”

She subsequently declined to proceed with the charges. King was ordered to attend 10 marriage counseling sessions.

I am not condemning Bernard King if he’s innocent of all of these charges. I’m just using Bernard King the basketball player, whom I did see, several times, perform amazing feats of basketball-ism, as an example. Because if we continue to celebrate men who are even suspected of the cowardice that hitting a woman entails, voting them into institutions which are meant to celebrate character as well as athletic prowess, we’re devaluing sport.

That King and Cox might have had substance abuse problems is irrelevant. That’s between the man and the substance. That they hit women, if they did, is unconscionable. 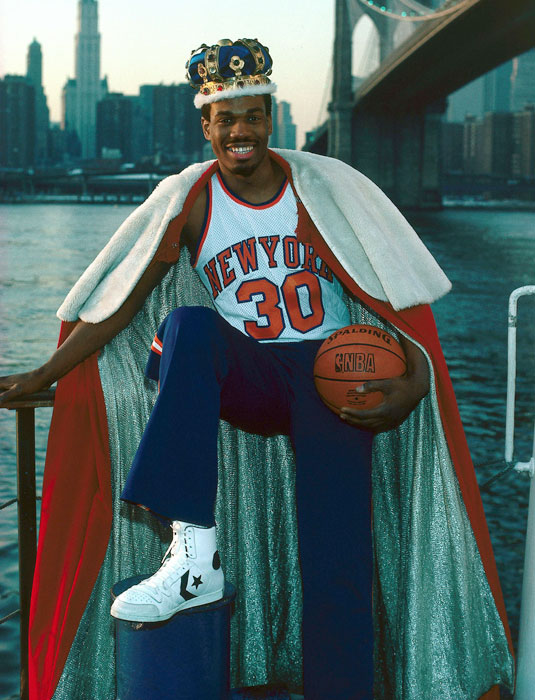 If you Google “Bernard King” today, you will see photographs of him wearing a crown and a cape, like a king. If you read his Wikipedia entry, you will find no mention of his arrests.

I have visited Naismith’s hall up in Springfield several times. I’m not sure I ever will again.

I knew about Bernard's drinking problem but am ashamed to say I never knew about his history of violence with women. It is horrendous how men who beat up women get a pass in sports culture. Using PEDs is a more damning sin which doesn't make any sense at all.

Thanks for this piece, Peter.

he was a little bit before my time, and I remember hearing things about drinking and (maybe) cocaine...which obviously was far from unusual in the late '70's- early '80's sports scene. Had no idea about this stuff though...yikes.

Jerry Tarkenian is also going into the Hall. Let's see how big of a deal is made of this as opposed to Tark's "scandals"

i had never heard about the history of violence against women either. though i guess if it is not on his wikepedia page and is low on google searches, someone has done a great job of burying it.

i guess i shouldn't be, but now i am a bit surprised msg has him sub for clyde some games (to boot he is awful as an announcer).

enlightening article for sure.

If Bobby Cox wanted a job as an announcer or an analyst tomorrow he'd get it, too.

[5] very true.
i guess marv really got fired by msg for wearing panties rather than the physical stuff.

[4] he really is atrocious when he subs for Clyde

It's interesting that a lot of the sexual and physical abuse from that era is coming out now. It makes me think of schools like Horace Mann and the like. It happened at my school too, but procedure, in those days called for silence and cover-up. Nowadays, the Bernard King story would be a media blitz of epic proportions, as it should be, as it should've been.

To be inducted into the Naismith Basketball Hall of Fame, a candidate must be approved by 18 of 24 members of the honors committee (composed of players, coaches and media members), who are basing their decision on the nominee's "total contribution" to the game.

"There are no black and white criteria," says John Doleva, president of the Naismith Memorial Basketball Hall of Fame. "Decisions are based as much on quality as on quantity. Players aren't voted in because they played for this many NCAA champions or participated in two NBA Finals or any set criteria."

Notice that Doleva didn't mention anything about a candidate's character being a factor.

[0] Oh wow. I remember just getting into basketball in 1982/3 and loving Bernard King. Never knew about any of this either, it's horrendous.

[10] Yeah, it's news to me, too and profoundly depressing. I loved watching him play.

11) Agreed. Other than Dr. J, Bird and Magic, Bernard was the first basketball player I was aware of and more special in a way because he was local.

[4] Yeah, I had no idea that King was such a misogynist. I never ever had a bad impression of the guy, but that just changed quickly. King sounds like he's quite the dick.