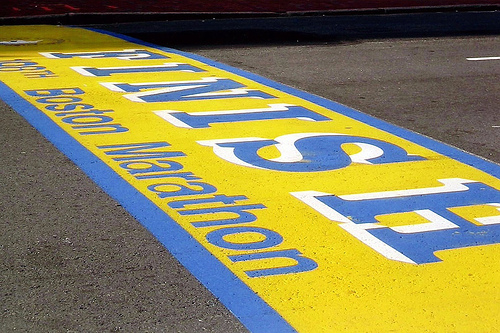 I’m told that a photograph from The Boston Marathon bombings was quickly circulated to news sources depicting someone with a leg blown off. I was told of the photograph of the missing leg by a friend named Lamar Graham who, as editor-in-chief of nj.com, the state’s largest news disseminator, told me that he’d refused to run it, which confirms what I’ve known for a couple of decades now: that Lamar is a great journalist.

Disaster coverage, wherein the disaster has taken and maimed human life, is, for the responsible journalist, the most horned dilemma of all. Do I do my best at what I have been hired to do — be the neon lens onto the scene, wherein the more vivid the detail, the more compelling the tale? — or do I act as the best human being I can be, wherein that lens must have filters? (That was a loaded question. Next time Lamar gives a seminar on how to run a website, I’m going to be there.)

Because here’s the thing: bad news – whether its nature is disaster or gore or geek – is not to be defined as an event to be weighed by our ability to be transfixed by it. It happened independent of our need to be fascinated by it. It has a context. And, of course, disaster and death have the hugest context of all.

This is nothing more than an open plea to any journalist in Boston over the next few days, with her or his “boots on the ground,” entrusted to bring us facts: weigh your words and images very carefully. Please.

I know whereof I speak. In July of 1982, as a reporter for the San Diego Union, in New Orleans on a sports story, I covered the crash of a plane en route to San Diego, just after takeoff, killed everyone on board. Eager and carnivoristic reporter that I was, and schooled in the “Get the story first and best!” school, with half the gaping, wounded fuselage still on fire in a field I slipped through some police tape into the field, and hooked up with a couple of coroner’s deputies planting little plastic flags in the ground where they saw evidence, and, at their side, I catalogued the severed limbs I’d seen. It was easy; as anyone who has been close to stuff like that knows: You just go into shock, as if a plastic visor is descending over your sensibilities, and become The Reporter.

I was proud of my enterprise. I filed my gruesome story, only to discover the next day that the editor had taken out all the anatomical detail. “It was too gory, hunh?” I said, over the phone, from 2,000 miles away. “No,” he said. “You don’t get it. Relatives of the victims are going to read that, and it’s going to make their loss even harder to bear. ‘Did what he described belong my brother?’ Never forget that you’re not writing to be noticed. You’re writing for people to inform them about what has happened.” Then he invoked Hippocrates’ Oath, which pertains awfully particularly at times like these: “First, Do No Harm.”

Twenty-one-and-a-half years earlier, on Dec. 16, 1960, two airliners collided over Staten Island. The TWA Super Constellation plummeted straight to the ground. No survivors. The United DC-8 limped its way toward Prospect Park in Brooklyn, with half a right wing, but came up short, crashing in Park Slope, killing all on board except a 12-year-boy who was tossed into a snowbank, to survive another 24 hours, but only after having been devoured by media, who also took detailed note of the wrapped Christmas presents scattered around the site to never be opened. My dad was on that plane, and man, did I, a seven-year-old reader of newspapers, not want to read details.

Beautiful story, Peter. Especially the part about your experience as a young reporter as well as the horrible story about how your father died. Thank you.

Thank you Peter, and I'm sorry for your loss at such a young age.

Thank you for sharing that, Peter.

Thank you, Peter for a moving, beautifully expressed portrait on the complexities of journalism and its handling of human tragedies. Nice to know there are journalists out there, sacrificing the juicy "story" for that of empathy and compassion. And to weave your own life experience makes it that much more compelling.

Really "just exactly perfect" for what's on my mind right now. Thanks, Peter. Thanks also to Alex, for making sure I didn't miss it.

Basically, I agree, but we needed to see that little girl burned by napalm running down the road naked in Vietnam. Who knows how many lives that photo saved.

Honest question, how long after reading about the unfolding events in Boston did New Yorkers think that we might get hit at rush hour in the subways?

Probably after an hour I added to "oh, my god, pray for Boston" with "holy shit, what's waiting for us underground in Times Square?"

I think there are differences in appropriate coverage of an attack on our country with unknown parameters (or an ongoing war as in [6]) and a tragic, finite accident like in the above piece.

7) I had to cut through Bryant Park last night and hesitated...landmarka and all...but then walked through it anyway.

Also, interesting point about the Vietnam War images. I wonder if it was considered vital to print those kinds of pictures because there was a sense that the reality of what was going on was somehow being supressed?

[8] Shocking news is sometimes necessary to re-define your entrenched understanding of an important position and also to make immediate decisions in the face of a crisis.

Last night it was important for New Yorkers to know they were using IEDs w/ ball bearings and nails that blew people's legs off.

I also appreciate taste and tact in reports of disasters. Please let your friend Lamar Graham know that when two teens drowned in Mt. Olive a few months ago, we the readers did not need to hear that they were yelling, "Please help me. I don't want to die."

The term "calling for help" would have been sufficient. Why paint a painful and permanent picture of their last few seconds of life in their parents' minds?

Yes, their words are poignant, but printing them was unnecessarily harmful.