Welcome Back to the Five and Dime, Lil’ Sori, Lil’ Sori 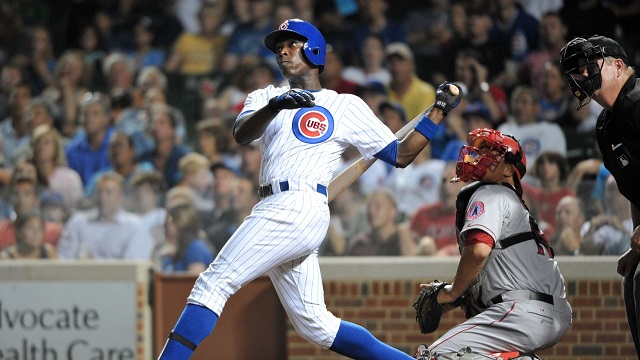 Reports have our old chum Alfonso Soriano traded to the Yankees. He has $24.5 million left of his contract through the end of next year; the Cubs will pick up $17 million.

I always liked watching him hit in a cartoonish way–skinny guy, heavy bat, slugg0, lots of strikeouts–oh, that slider low and away. Remember when he was in New York and people talked about his strong wrists and how he was like Hank Aaron? Well, he never developed past his bad habits and has been more like a svelte Dave Kingman but he should be an improvement over Vernon Wells. Sori could be vexing to watch but he was easy to like.

At the same time, I wish the Yanks would just become sellers and stop picking up veteran scraps, for what? To make a playoff run this year?

As some around here have said all season: Sell, Sell, Sell!

Now we can give ARod back to Texas and pretend the whole thing never happened, right?

This post over at Pinstriped Bible sums up my thoughts/feelings/fears regarding a rebuild. It all seems so nice and easy when we just assume that they'll reload and basically turn into the '94 Yankees within 3 years.

[0] Throwing in the towel for good at this point, AB? While I think that describing this team as mediocre would be generous, there's still 60 games left and they're only 2.5 out of the wildcard! I know, I know, mortgaging the future in exchange for squeaking into the playoffs this season just to lose the one-game playoff would be dumb, but should they definitely be selling if the postseason is possible?

...Maybe I'm just delusional to think October baseball is possible, but dammit, I need something to justify watching these games for two more months.

[4] It's not crazy. They have championship caliber pitching - tied for 2nd in the AL w/ Texas all while CC and Andy are struggling. With Jeter and Grandy coming back, and Sori providing a little right handed pop, it's not out of the question to see an extra run per game which could make all the difference.

People really wanna sell the team and give up during Mo's last season? And (most likely) Andy's? Not me.

Keep running hard right through the finish line, that's what I say.

Wildcard teams have won it all before, and it's impossible to argue with the strength of the pitching and the strong likelihood that the offense will improve significantly soon.

In the words of the great Casey Stengel, "You can't have a miracle everyday but you can if you got the pitching". The Yanks have enough pitching starting and relief to contend now and in the near future. The game has changed without PED's. If they can improve their offense just a little they will be in the mix.

the Cardinals have proven twice in the last 10 years, all ya gotta do is get in...

"oh, that slider low and away."

"At the same time, I wish the Yanks would just become sellers and stop picking up veteran scraps, for what? To make a playoff run this year?"

Well, I admit it: I want the Yankees to make the playoffs. If they don't, okay, it was an amazing run and it's over, or interrupted. But I'll be disappointed. So I don't want them going into "seller" mode.

Oh, and as long as we're feeling nostalgic, here's Wetteland talking about his days with Mo as his set-up man.

Wild cards teams have won it all before, but the new wild card system makes it much, much harder. That one-game play-in sucks. It's basically a coin flip. One in which most teams will end up burning their ace.

[16] But the 50/50 chance in a one-game playoff to move on to the next series isn't much different than your chance of winning any given playoff series ...

[18] I still hate it. I don't like even 5-game series. Not a fitting end to the long grind of the regular season. A one-game series is worse.

And aside from my feelings about it...it's still an extra hoop to jump through. How many of those wild cards who made it in the past would have made it with an extra 50-50 roll of the dice before the real postseason started? One in which they had to burn their ace in a game squeezed in between the last game of the regular season and the first game of the postseason? A wild card isn't what it used to be.