Welcome To My Nightmare 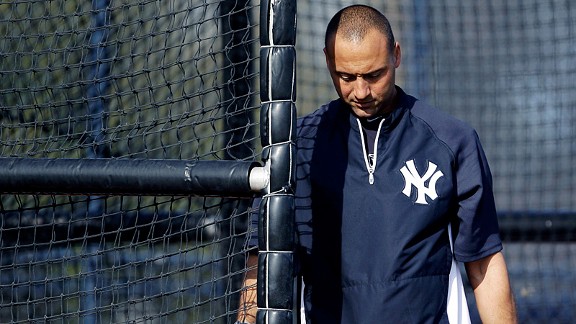 No, we aren’t talking about Alex Rodriguez. His nightmare is recurring and not likely to go away anytime soon. Tomorrow will bring official word that he’s being suspended and the coming days and weeks will give us more than we can stomach.

Today’s nightmare isn’t even Phil Hughes, who didn’t make it out of the 3rd inning today pitching in front of family and friends in San Diego. No, it’s Derek Jeter who has a Grade 1 calf strain:

“It’s been terrible,” Jeter said. “It’s been like a nightmare. The whole season has been a nightmare. I really don’t know what to tell you. I wish that wasn’t the case and we were sitting here talking about something besides another injury. We’ll see what happens. I have no idea.”

The game, a bummer (Padres 6, Yanks 3) but the news is more dispiriting than that.

..with more mishegoss on deck. Buckle up.

So, what terrible event or prospect can Jeter be setting us up for? Still don't have my arms around what let to the injury last season or his inability to heal, but like the death of someone who has lived a long and beneficial life, their careerend should be celebrated, not mourned. Remember, Joe played only 14 years. Couldn't fix the ankle.

Now, if you want to know what a nightmare really looks like, picture A-Rod's return. Now there's a story with frightening consequences which I urge someone with skills and knowledge to relate and which, hopefully, will omit post-Freudian references to his relationships with his mother and absent father.

I feel like somehow A Rod's and Jeter's access routes to the majors are intertwined, like because of a kind of black magic on A Rod's part. Yes, A Rod is surely responsible in some way for Jeter's newest injury. A Rod's evil is strong.

1) What's so frightening about it?

So Jeter is having one of those nightmares in which you can't where you're trying to go -- the door keeps closing just before you get there, you're on the wrong side of the river and there's no bridge, you hear the happy voices at the party but you can't tell where they're coming from. And it's all because [2] his spirit is intertwined with A-Rod's, in some Yin/Yang thing.

This is actually more plausible than most hypotheses I've read.

I have a feeling Ichiro could fix it. He's just waiting for someone to ask.

I blame karma. We all had so much fun last year with Boston's clusterfark that we are now paying for it. At least the Yankees have a good chance at finishing above .500.

[4] Ichiro and Cervelli together. They're like a buddy cop movie partnership. It may seem counter-intuitive, but it's true.

[7] Although, Frankie might need all his mojo to heal himself... during his 50-game suspension, I mean.