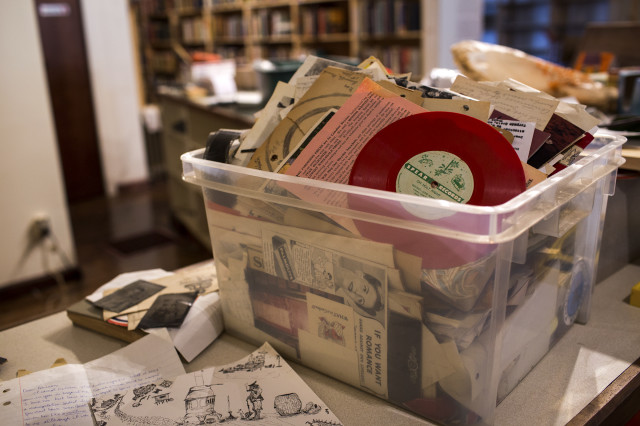 Over at Narratively, Shannon Firth profiles our man, Michael Popek (aka “unmoderated”):

Michael Popek remembers visiting his grandfather’s four-story home in New Jersey, where anything that could be collected, was—stamps, toy train cars, cap guns, autographs, baseball cards. “There was a standing order not to touch any of the WWI grenades,” Popek says. As far as his grandfather knew, these were still live and active.

Those visits happened long before Popek, now 35, started gathering his own assortment of collectibles: things left between the pages of books, or as he calls them, Forgotten Bookmarks. It seems destined to happen, given that Popek comes from a family of collectors. He grew up in an old farmhouse in Oneonta, a small town in upstate New York. His father, Peter Popek, a former UPS deliveryman, started a book business in the mid-eighties, but only after coming upon a too-good-to-be-true deal at a local auction.

The offer was 5,000 books for $10. He paid an additional $10 for delivery. According to the elder Popek, no one wanted these books, including him. “We had no interest in books. We didn’t know anything about them. But we didn’t want to waste ‘em,” Peter Popek says. Within a few years, Michael’s father had filled a barn in the backyard with over 20,000 books. The Popeks also bought and sold antiques and owned a small shop in town, not far from their house. Slowly, though, the book collection muscled its way into the antique shop and took over much of the space.