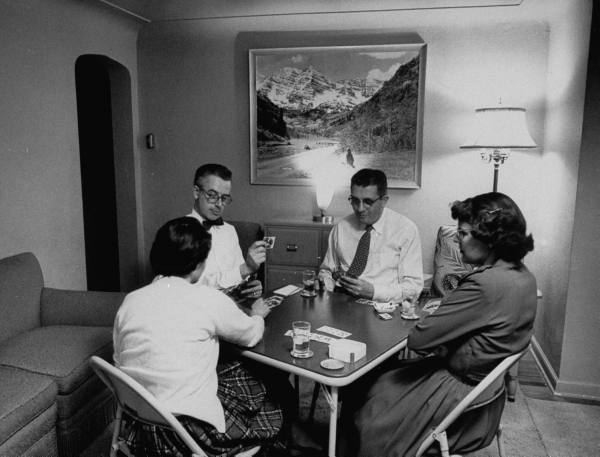 Compare bridge to poker, its coarse cousin. While bridge is infinitely analytical, poker is more psychological: In high-level matches, every player at the table can compute the odds instantaneously, and what separates the best players from the pack is the ability to pick up “tells,” such as the furrowing of the brow as an indication of bluffing.
Mr. Bayone said, “The best bridge players are, as a group, finance people, actuaries, lawyers. The best poker players are 19- to 22-year-old kids who have never done anything else.”

Another difference is that money is central to poker, while bridge is played for no stakes other than “masterpoints,” a running tally of points that ranks players similarly to chess ratings. Thus, bridge satisfies the universal truth that those who have vast sums of money are loath to talk about it.

Mostly, though, the nature of bridge presents an enduring intellectual challenge for people whose success in life leaves them seeking further challenges. It has a “comforting leveling aspect,” as psychiatrist Melvyn Schoenfeld, a regular at the Manhattan Bridge Club, put it.

Take fashion mogul Isaac Mizrahi, who learned the game at the behest of his bridge-playing mother, who told him that, if he didn’t learn to play by age 30, he wouldn’t have any friends by 40. Mr. Mizrahi described a bridge tournament to me as “the most fantastic use of three hours of your life.” In bridge, he finds intellectual and psychological nourishment.

“I think it’s really important to keep that state of vulnerability,” he said. “You have to give it up every once in a while. You have to walk into a room and be an idiot and not know what you’re doing. That’s the only way you can get anywhere in the world. And that’s the great lesson of bridge.”

Thanks for the article. I thought the late Charles Goren was the only one who made a living from bridge.