In Game 5 of the 2000 World Series, Mike Piazza represented the tying run with two out in the bottom of the ninth. Mariano Rivera was on the hill for the Yankees protecting the 4-2 lead and attempting to shepherd home another World Championship. Rivera uncorked an 0-1 cutter and Piazza appeared to make solid contact and drove the ball to center field. 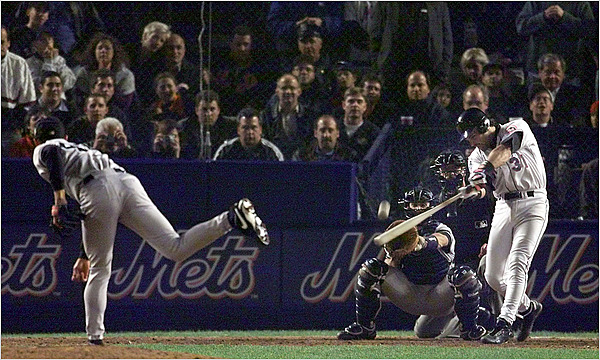 The ball took off and spun Bernie Williams around as he raced back in pursuit. But Shea Stadium isn’t a band box and the last second cut of Mariano’s signature pitch guided the ball past Piazza’s sweet spot and down towards the end of the bat. Bernie caught up to the ball easily before the warning track and the Yankees were champions again. 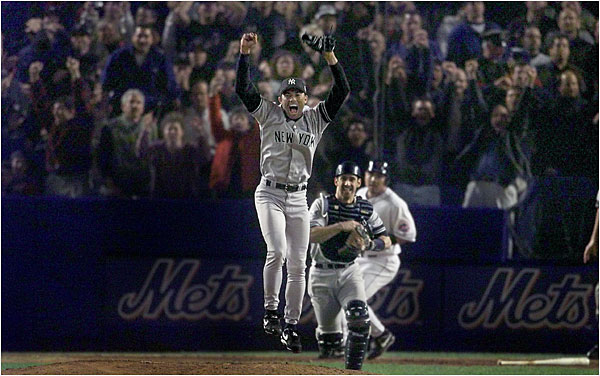 Steven Pinker, author of The Language Instinct and expert linguist (among other things), says, “In  baseball, one says that a slugger has flied out; no mere mortal has ever “flown out” to center field.”

Before you trust him implicitly, be careful, dude’s a Red Sox fan.

Let us know your preference in the comments.

And to those big Mets fans, this is not a referendum on Piazza's mortality, though I can see how you might make that inference.

Both seem to work. Literally.

[2] I find the case for "flied out" very compelling, yet I've heard, read, said and written "flew out" for over 30 years. And that's 30 years of immersion. So I wonder if it's a case where the common usage has overwhelmed the grammatical distinction.

Complicated. At first I thought they were adjective, describing the out. A fly out, a ground out. And adjectives don't have tense. So it would be, 'last at bat he hit a fly-out'.

But I guess it's also used as a verb, And Piazza flies out. So in that case, yeah, it would have tense. So what's the passed of flies? He flies.... he flew. I don't think flied is a word.... check that Merriam webster says the only usage of Flied is associated with baseball.

I still get nervous watching that highlight. Thought Piazza nailed that one.

I believe my quote when Piazza made contact was "BUHHHH!!!!"

[4] Yeah, but, we're talking about the baseball usage! This is Pinker's point, I think.
Even when a word is irregular, a novel use of that word tends to revert to the regular form. Pinker is just describing how people do it, not telling you the 'right' way. (He says something similar about the plural of 'mouse' when you're talking about the device that's attached to your computer -- he says it's almost always 'mouses'. Is that true? I think I've heard both ways.)

[4] Anyone care to take on the RBI vs. RBIs debate.