Who Knows What Evil Lurks in the Hearts of Men? 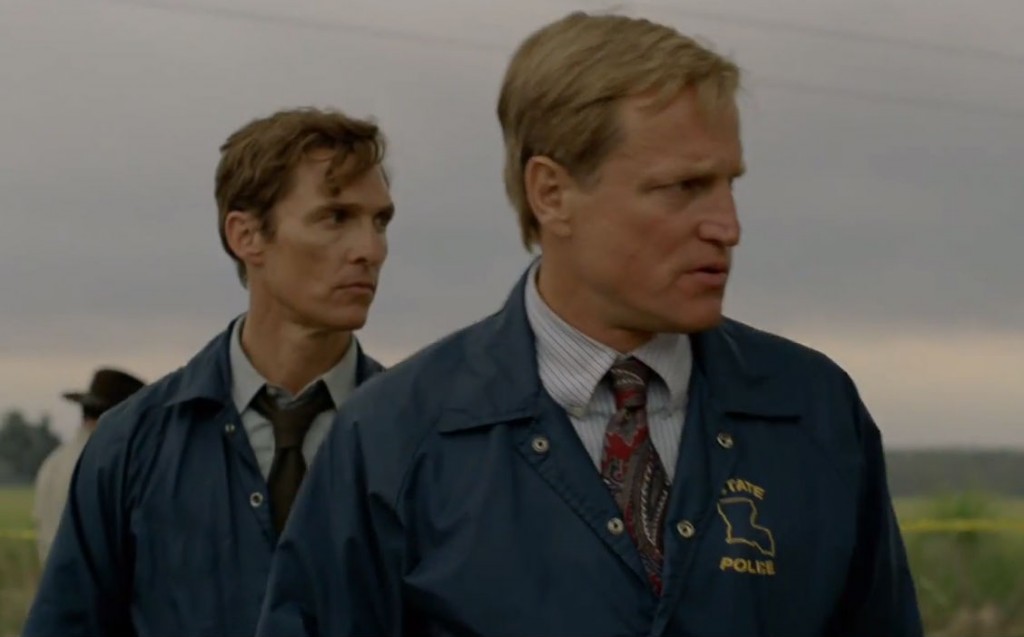 I think Emily Nussbaum makes a lot of sense in her critique of HBO’s True Detective series but I still find the show engaging. It is portentous at times but the atmosphere is also unnerving. The entire show is beautifully crafted and Woody Harrelson is terrific. His partner, Matthew McConaughey’s has a  tough, demanding role and he’s often compelling but he does enough melodramatic inhaling each time he takes a drag from a cigarette to take me out of the scene. Still, his self consciousness isn’t enough to spoil things.

I like that it’s an 8 episode season. Next year, the show will have different actors and characters.

Over at the Daily Beast check out this interview with True Detective‘s director, Cary Kukunaga.

i really wanted to get into this show but could not.
i actually found woody annoying.

1) Someone else I spoke with said the same thing, about Woody. Found his accent irritating. It took me about 3 episodes to get into it.

[2] ha the accent was one of the big things i disliked too.
i gave up pretty quickly. might revisit it on demand.

It's not the easiest thing to get into, but if you accept that the whole misogyny thing is kinda necessary to accurately portray the world these characters inhabit then it's very good.

The tracking shot ending the episode two weeks ago was not the type of thing you see on television that often.

There is a shot, maybe in episode 3 or 4 where they show this Meth guy, some bad guy, walking in the distance. He's in his underwear, wearing a gas mask and is carrying a machete.

Welcome to my nightmares. Dammit.

4) Yeah, I'm leery of the kind praise that's been heaped on that tracking shot. If you're noticing that it's a long tracking shot while it's happening you aren't invested in the story but the storytelling. Which isn't to say that it isn't impressive. But it's only justified if it works for you with the story. Otherwise, it's showing off.

6) well it's a flourish yeah, but I think in the whole setup of that scene it works. It's almost like a "Touch of Evil" thing, a lot of moving parts happening simultaneously in a self contained little world. So I think it worked.

As far as the misogyny issues, I get it but at the same time we're talking about a show where the universe is populated pretty much entirely by severely damaged alpha males. It only makes sense.

A little disconcerting seeing Brother Mouzone doing the interview. Pretty good show but why all these young ladies want to hangout with Woody is beyond me.

I dig the show. I didn't care for Nussbaum's take.

I liked the long traveling take, and I have to be honest, I found the scene gripping enough that I didn't even notice it was one shot until about 2 minutes in. That said, the way the show deals with shifting timelines and the unreliable narrator is more impressive to me than that shot.

I don't think it's McConnaughey being self-conscious as much as the character. I'm not sure how else he could play that to elicit the effect they seem to be going for with Cohle, Alex. I think your annoyance with it mirrors that of the other characters interacting with him. You know, "Jesus, this friggin' guy" sorta stuff.

9) I see your point. Man, it's a tough part. How do you play that kind of guy without being odd, annoying, or standing apart in a way that pisses off everyone around you? You're right, part of the guy has to be irritating. Interesting. But still, I think it's him being a show off actor that bugs me. I can always see the gears working with him. But your point gives me something to consider, or reconsider, as I keep watching.

Also, I agree with you, I think the way the show deals with the timelines and the pictures showing a different story than what the characters are saying is really accomplished.

[10] I'm also willing to give McConnaughey the benefit of the doubt because I've been so impressed with his other recent work in stuff like MUD, KILLER JOE and THE WOLF OF WALL STREET. The guy just has a really quirky energy and a ton of presence. In the last few years he's stopped trying to be that conventional rom-com/action movie leading man and embraced it.

But his performance here works for me, and you are also right to call out Harrelson, who has to carry the thing.

I haven't seen those movies but I'd like to. Yeah, Woody's become really solid over the years.