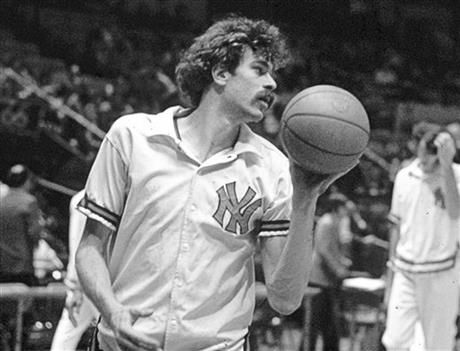 I’m a casual fan of the NBA. When I want to know the skinny I like to read Zach Lowe over at Grantland. Here’s his take on Phil Jackson and the Knicks.

Whatever Phil can or can't do, to me it all boils down to whether or not James Dolan can restrain himself from meddling with any part of the team. The Knicks are what they are because of him first and foremost, and if Phil can't change them, no one under Dolan's ownership likely ever will. I would like to think this is Dolan's last chance before the NBA steps in and compels him to move over/out.

We chatted about this via email last week. I'm not sure why would the NBA do that. According to Forbes the Knicks are the most valuable franchise in the league. Also, the NBA has done fine without the Knicks winning a title in 40 years. I don't see how Dolan is ruining the team from a financial point of view. From a fan's perspective, yeah, he's awful, worse than George ever was, but his bottom line is looking pretty good.

one of the best decisions i have ever made was to dump the knicks. the nba is my favorite sport and i longer have the knick's incompetence/ organizational craziness dragging me down. i get to enjoy great players and well-run teams.

anyway, at the very least this will be interesting i think.
i'm not sure this role really utilizes phil's strengths. and even if it did as will already pointed out it seems inevitable dolan will f it up.
about the only thing the knicks have done okay with in the last dozen years or so is draft well late in the 1st round. but they have traded away so many picks in foolish deals (bargnani being a prime example) that they haven't even been able to build from that strength.
let's see how phil does.

[1] [2] yeah there is almost no way the league forces dolan to sell.
supposedly stern had something to do with the knicks bringning in donnie walsh, but i can't see a new commissioner inserting himslef in the knicks management just because they are (as stern put it) "not a model of intelligent management."
they are the most valuable franchise and they are relevant from the standpoint of being talked about - just not for winning.
if the league didn't make donald sterling sell, i am not sure what the standard would be to force a sale.

as for Phil, I'm not dumb enough to think he's a miracle worker. But if Dolan is really willing to just hand over the reins (and at $12 million a year, I gotta think even Jim has to figure he might as well get out of the way and get his money worth), then you could probably do a lot worse than Phil assuming his heart is in it.

I know he has no experience, but neither did Pat Riley...neither did Jerry West...When the most successful coach in the history of the league says he wants to take over your basketball operation, you listen to him.

So we'll see how it works out, but I think a lot of the negativity surrounding it has to do with the belief that the Knicks can never and will never do anything right. And if you really believe that, well then the team should just be contracted and let the NBA hold a dispersal draft because what's the point?

Yeah, I'm like Raging T. I wish (kind of) I could have cut loose from the Knicks back in the Ewing days. But, I couldn't. I've disengaged from the NBA quite a ways, but it's still painful. God, do they suck. And the fact that every once in a while they're kind of exciting just makes it worse in the long run. Oy.

I'm in favor of drastic, radical moves. The team needs to move a long way from the direction it's been going. I wish you guys could listen to Danny Ainge. Possibly the NBA player who annoyed me the most during his playing days, but damn he gets everything right now. He really knows wtf he's doing.