Here we are again with another Where & When! (That dumb rhyme was unintentional; it happens.) Speaking of happens, it just so happens you might get this without looking too hard, but I was inspired by the old and almost equally lost neighborhood play: 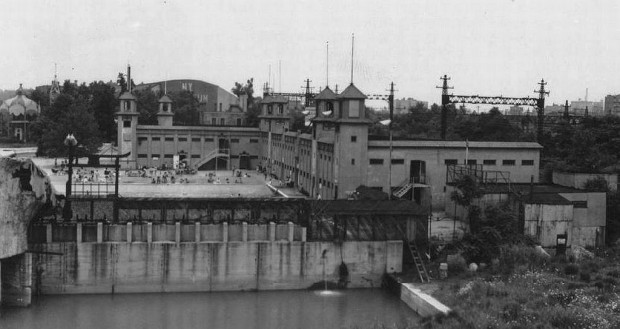 An interesting, if far from glorious picture, but I will link to some of the glory from this location after you figure out where this location actually is.  I don’t have an actually reference date for this photo, so for the when let’s go with what you know about the location.  For the bonus question, tell us two prominent features near the location that still exist today (you’re either gonna laugh or tsk me this one).

So you know the rules; show your work and complete answers, first one to he finish line gets the frosty mug of root beer and the bonus gets you a scoop of ice cream; all others get a cold mug of cream soda for the effort.  Stick around for a little history lesson (feel free to enlighten us and you might get a brownie) and we’ll see each other on the game thre… wait, are the Yanks playing tonight? No? Oh… well, stick around and chat!

Sing Sing? That was my first thought as well.

Thought the building in the background says NY Coliseum, but that sure doesn't look like Columbus Circle.

Not sure what railroad that it's next to either

This one is obviously gonna blow your minds...

Well it's not Fort Totten.

But the barb wire along the waterway looks to be angled out rather than in, so I'm wondering if it isn't some now abandoned military base.

.... perhaps if we focus on "neighborhood play" it's got something to do with second base? Or something close but not exactly next to? And it does look like folks are sunbathing.....

I think I know.
It's not that Coliseum! My dad grew up about a mile from this spot. Fun in the summer for the kids who had too far to go to Coney Island...

But I'm not sure, I'll check up a couple of leads.

Okay, it's Starlight Park, at West Farms Square, in the west Bronx.
The stadium is the Bronx Coliseum, or New York Coliseum but without any connection to the Columbus Circle one. A soccer team called the 'Giants' played there, and there were circus performances and stuff like that.
The park was an amusement park, and in the summer there were opera and theater performances. My dad, who grew up on Arthur Ave (about a mile north), remembers it quite well.

Oh, what got it for me was the Coliseum, which I'd heard of from my father. I'd also heard of Starlight Park but I never would have recognized it from the picture (obviously I never saw it!). "ny coliseum bronx giants soccer" got me here, and the rest was easy.

Well, I guess I'll go with the Bronx Zoo, which is 'near' by my standards and certainly 'prominent'!
'Features'...
The Bronx River?

I figure you have something else in mind, but I don't know what.

[11] Well yeah, that qualifies based on the semantics so you get the bonus, but as you correctly guessed I had something else in mind.

I seem to end up with comment #13 a lot here. Anyway, yes the answer is Starlight Park; guessing c. 1930 when it was already in decline as the picture seems to indicate. It was originally called Exposition Park, part of the Bronx International Exposition of Science, Arts and Industries in 1918, an extension of the World's Fair of that year. After the fair, it became an amusement park that ran until 1931 when it closed after a series of mishaps. The nearby New York Coliseum (no relation to the one in Columbus Circle and later called the Bronx Coliseum) was opened in 1928, two years after the park began hosting open air live performances, radio shows and sporting events. The coliseum itself was originally built for the 1926 Sesquicentennial Exposition in Philadelphia and transported and erected in the Bronx afterwards.

The park also hosted the first modern submarine commissioned by the US Navy, the USS Holland, named after Irish-American inventor John Phillip Holland, and launched on May 17, 1897 (it was actually first named the Holland VI, then changed to the Holland in 1900).

Alas, the park's demise likely began even before it's closing; in 1922 there was a roller coaster accident that resulted in one rider getting killed and many injured when the rider stood up while the coaster was moving, and the momentum from the weight shift and hitting a curve in the track threw him and everyone else in the two-car coaster overboard (this before safety standards were applied across the board to all roller coasters). By 1931, the only part of the amusement park aside from the Coliseum that operated regularly was the public pool, and when that was shut down the radio station was forced to move and the park was slowly demolished over the span of two decades. A fire in 1947 destroyed what was left of the pool's standing buildings and it became a desolate wasteland that was used by the city as a bus and truck depot, further wiped away by the Cross Bronx and Sheridan Expressways.

The (Bronx) Coliseum itself however continued to function off and on as the home of an Eastern League hockey team and concert hall (the Bronx grandad of Nassau Coliseum and cousin to Madison Square Garden if you will) until the US Army took over the facilities from 1942-46. After that, it became a city bus garage depot called Coliseum Depot until closing in 1995. after some refurbishing and renovations, it was reopened as the West Farms Depot in 2003 (yours truly was a roving security captain before it was reopened and this was one of the stops on my nightly route.)

According to the wiki page, the building remains standing, but it seems that's true only in structure and foundation if not form. So technically it's one of the structures nearby that's still around to this day. But for the bonus, I emphasized neighborhood (and Gary was killing me with how close he got to the main answers; I thought he was toying with us). With that in mind, I mentioned this outright in Game 52, so the bonus answers that would have gotten you Really Big Brownies were the Bronx River Bascules and the old Westchester Avenue RR Station. See what I did there? >;)

So the train line you see to the side was originally the New York, New Haven and Hartford line that is now owned and operated by Amtrak and CSX up to where it junctions with the MTA New Haven Line somewhere in New Rochelle before the train station there (which serves as both an Metro-North and Amtrak station stop). That's a lot to throw at you in one comment, so I'll leave it at that and let you search for more concise answers in Wikipedia and other spots I linked to. Enjoy the rest of the day, folks and congrats to RI again (*party whistle*) >;)

[13] Oh, and one other bit of trivia: The NY (Bronx) Coliseum was the original NYC performing home of the Ringling Brother's Barnum & Baily Circus before they settled in Madison Square Garden. Pretty awesome, eh?

Oh, of course -- I should have thought of previously depicted "features"... d'oh!

That's cool that you were security at the bus depot. And I think it's hard to imagine building the Coliseum in Philadelphia and freighting it over to the Bronx -- I wonder if they put it in pieces on a train, or shipped it? You could get there by ship since the Bronx River is navigable and was definitely navigated in the 1920s.

[15] I've seen films in which buildings are dismantled floor by floor or brick by brick as opposed to thoroughly demolishing them; my guess is given where it's located, and also given that there were a whole lot more tracks criss-crossing Philly and the five boroughs during that era, they probably dismantled it, shipped all the stones and girders by freight train and reassembled it on its present site. That's not hard to imagine if you consider that this was during the height of the industrial age and gonzo financial speculation right before the stock market crash and Great Depression.

I would think that they totally demolished the original building and replaced it with the depot that stands there now, given that it's one of five compressed natural gas depots in the entire MTA system, which also explains why they had to have 24-hour guard posts while it was being constructed. However, nothing I see on the net either confirms or denies that; the wiki for the Bronx Coliseum states the the building as it was after it became a bus garage is still there, but shows a picture of the new depot they were building when I would come through there. Strange.