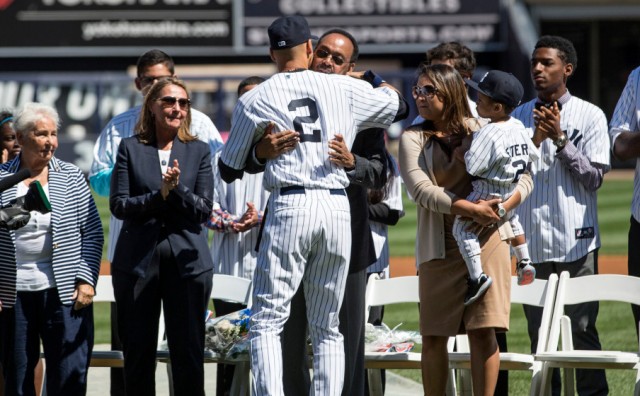 Our man Jeter didn’t get a hit. In his third at bat, he swung at the first pitch and hit the ball to the warning track in what was formerly known as Death Valley (I guess it was never known as that in the new park but you get what I mean). The TV replay of his parents was sweet. Dad looking down as the at bat was starting but watching his son by the time the pitch was delivered. Mom looking on. After the ball was hit she said, “Oh.” Their bodies tensed as they watched flight of the ball. “Please go,” she said, “please go, please go.” She held her breath then said it again. Please Go. But he didn’t get enough of it. When the ball was caught, Jeter’s parents reflexively jerked back in their seats.

Ohhh. His mother leaned back and clasped her hands behind her hand. His father smiled.

Their son might be old, in his last days playing a game for boys, but they still looked like Little League parents. It was still fresh for them. They were still right there.

My mom still goes crazy when she sees me play a gig. She'll dance and scream and raise her hands in the air. She's been watching me gig since I'm 10 years old but still has the same reactions. It's beautiful.

We attended game and all were depressed after top of 1st (30 minutes long!). Then McCann's booming HR went right over our heads and landed about 60 feet away, halfway up the 2nd deck. With all the games I've attended, I don't remember having to look straight up to watch a ball pass me by, that close. We saw 3 HRs (one by Rays star Longoria), Young nearly hit for the cycle, Capuano's shortest outing of his career, 11 pitchers appeared including Dellin, and best of all, Yanks won. And it was sweeter because they won by coming from behind and gradually increasing their lead as Yanks bullpen delivered 8.1 scoreless innings. A memorable "last Jeter game".