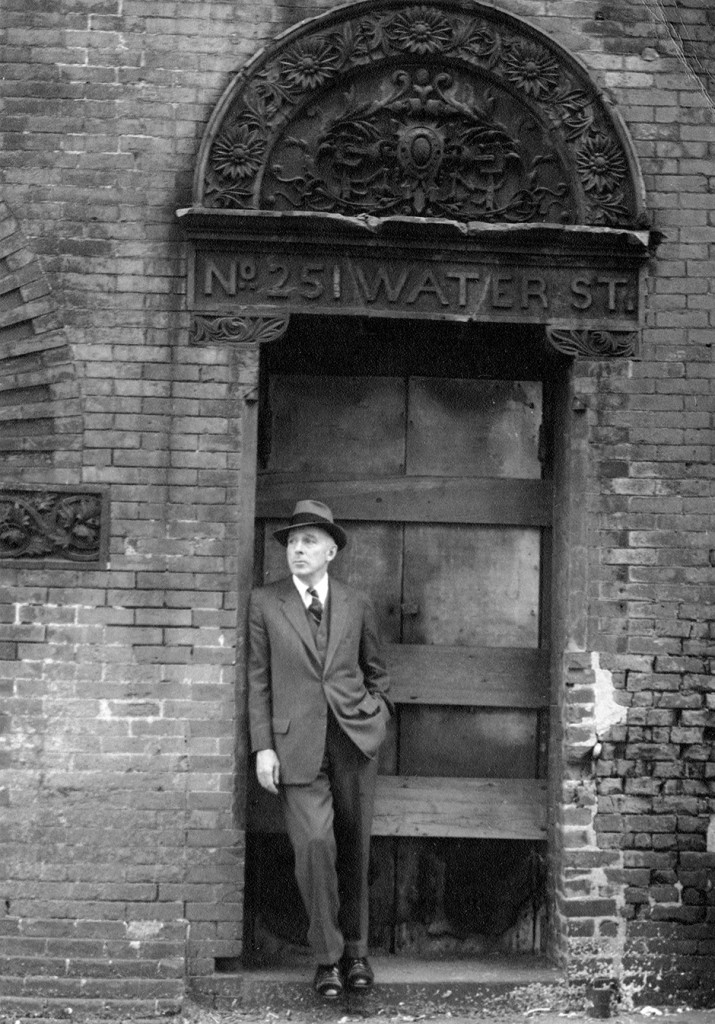 Head on over to The New York Review of Books and dig Janet Malcolm on the new Joseph Mitchell biography by Thomas Kunkel:

Mitchell studied at the University of North Carolina without graduating and came to New York in 1929, at the age of twenty-one. Kunkel traces the young exile’s rapid rise from copy boy on the New York World to reporter on the Herald Tribune and feature writer on The World Telegram. In 1933 St. Clair McKelway, the managing editor of the eight-year-old New Yorker, noticed Mitchell’s newspaper work and invited him to write for the magazine; in 1938 the editor, Harold Ross, hired him. In 1931 Mitchell married a lovely woman of Scandinavian background named Therese Jacobson, a fellow reporter, who left journalism to become a fine though largely unknown portrait and street photographer. She and Mitchell lived in a small apartment in Greenwich Village and raised two daughters, Nora and Elizabeth. Kunkel’s biography is sympathetic and admiring and discreet. If any of the erotic secrets that frequently turn up in the nets of biographers turned up in Kunkel’s, he does not reveal them. He has other fish to gut.

From reporting notes, journals, and correspondence, and from three interviews Mitchell gave late in life to a professor of journalism named Norman Sims, Kunkel extracts a picture of Mitchell’s journalistic practice that he doesn’t know quite what to do with. On the one hand, he doesn’t regard it as a pretty picture; he uses terms like “license,” “latitude,” “dubious technique,” “tactics,” and “bent journalistic rules” to describe it. On the other, he reveres Mitchell’s writing, and doesn’t want to say anything critical of it even while he is saying it. So a kind of weird embarrassed atmosphere hangs over the passages in which Kunkel reveals Mitchell’s radical departures from factuality.

It is already known that the central character of the book Old Mr. Flood, a ninety-three-year-old man named Hugh G. Flood, who intended to live to the age of 115 by eating only fish and shellfish, did not exist, but was a “composite,” i.e., an invention. Mitchell was forced to characterize him as such after readers of the New Yorker pieces from which the book was derived tried to find the man. “Mr. Flood is not one man,” Mitchell wrote in an author’s note to the book, and went on, “Combined in him are aspects of several old men who work or hang out in Fulton Fish Market, or who did in the past.” In the Up in the Old Hotel collection he simply reclassified the work as fiction.