Of all the ledes in all the stories inspired by the Ali-Liston “Phantom Punch” fight, I liked best the one by my late friend Barbara Long wrote for The Village Voice fifty years ago this week, “I loved the minute of it!”

Her timing, though, was a little off. It was at precisely 1:44 that the Phantom Punch either did or didn’t land and Sonny Liston went down. At 1:56 he got up, at which point Ali began bombarding him with punches, and it was 2:12 when the referee, former heavyweight champ Jersey Joe Walcott, stepped in to inform the participants that the fight was actually over 16 or 17 seconds earlier.

If you think that’s confusing, then you know how everyone in the crowd of 4,000 (the smallest ever to witness a heavyweight title fight) felt. Watch the fight and judge for yourself.

Three days after the fight, the cover of Life magazine hit the stands with Neil Leifer’s famous photograph on the cover. A defiant Ali stands over a down and dazed Liston. It’s probably the most instantly recognizable photo in boxing history and may well be the most famous single shot in all of sports. 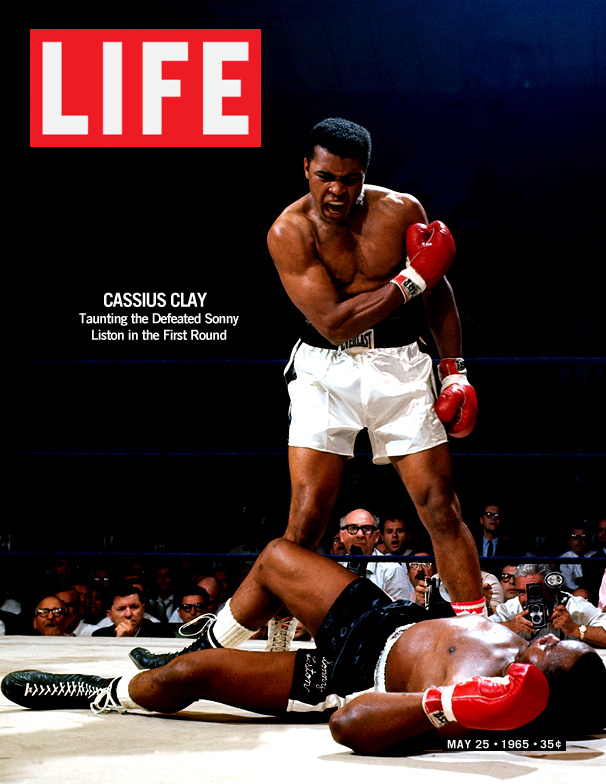 For many, Ali’s pose seemed staged, adding fuel to the rampant rumors that the fight was fixed. Liston had been one of the most fearsome champions the heavyweight division had ever seen; he had never been knocked down and most members of the old boxing establishment simply refused to believe that Ali could have knocked him out so easily.

Leifer’s picture, therefore, came to symbolize the fight itself. Or as Kelefa Sanneh wrote in last week’s (May 25) New Yorker: “The famous 1965 photograph of Muhammad Ali shouting at the limp body of Sonny Liston records not a great triumph but a great fiasco: the fight, hurriedly staged in a hockey rink in Lewiston, Maine, ended with a first round knockout that many still believe was fraudulent – the result of a ‘phantom punch’ and evidence, purportedly, that Liston had been paid to lose.”

Indeed, there were many rumors that Sonny was paid to take a dive, though everyone seemed to have a different theory as to who paid him and why. (You can hear several of the conspiracy theories on YouTube.) But no one has ever been able to explain why it would be worth a lot of money for anyone to pay Liston to lose, or, if he was intimidated by some of the angry black Muslims that surrounded Ali, why he couldn’t have used his well-known mob connections for protections.

In their first fight, Liston was a huge favorite, and anyone who bet on Cassius Clay cleaned up. But in the second fight, the odds were a slim 6-to-5 favor Liston, so there was no big money to be made betting. The real money was in having the heavyweight title or in owning the man who held it. How much money could Liston possibly been paid to throw away the most valuable prize in sports? And who would have paid him since what the mob surely wanted was for Liston to win back the title?

At the risk of destroying boxing’s most cherished conspiracy theories, it’s time to put to rest the notion that either fight represented anything but total domination by Muhammad Ali. Ali went on to become the greatest heavyweight of all time, and Sonny Liston, who was likely much older than the 31 years he claimed – some said as old as 38 — suddenly got much older when facing the fastest heavyweight who ever lived. As the late, great Ring and Boxing Illustrated editor Burt Randolph Sugar put it, “At his best, Sonny couldn’t have hit Clay with a handful of stones.”

What happened in their second fight is that Liston walked right into a punch – two punches really. And the recent spate of Phantom Punch anniversary stories have left out one key fact: not everyone who saw the fight agreed that there was no punch.

In a story in Slate on May 22, Dave Mondy wrote that Leifer’s photo “was actually preceded by the puniest of blows, a ‘phantom punch’ as it would later be known – a wispy, theoretical mini-hook that none in attendance even observed.”

A piece I wrote for The New York Times in 2000 on the 35th anniversary of the fight has been quoted by writers on several sites, but, interestingly, no one has the people I talked who did see the Punch. For instance, the Village Voice’s Barbara Long, who was seated behind Ali’s corner and told me that Liston, when hit, had reacted “Like a man on a bicycle hitting a low-lying branch.”

In a column printed two days after the fight, The Los Angeles Times’ Jim Murray, probably the most respected sportswriter in the country at the time, wrote, “I’ll tell you what happened. Sonny Liston got the hell beat out of him is what happened. This time I was looking for it and I saw it: an old man groping his way into a speedy insolent reckless kid … Cassius could have beaten him in high heels.”

Former heavyweight champ and future New York State Athletic Commissioner Floyd Patterson was the man Liston had beat to win the title. Like Long and Murray, he was seated to Ali’s back when the punch was thrown. In an interview for a book several years later, he told me, “Liston got hit hard … Liston was leaning toward him and about to throw a left jab. Suddenly Clay threw a short right hand that I thought hit Liston on the chin. Liston was rocked. And when he started to get up, he was bewildered. I could see it in his eyes.”

The best analysis of the knockout was offered by Tex Maule in the June 7, 1965, issue of Sports Illustrated: “Muhammad Ali, born Cassius Clay, retained the heavyweight championship of the world by knocking out Sonny Liston with a perfectly valid, stunning, right-hand punch to the side of the head. And he won without benefit of a fix.

“Although it is impossible ever to discount the possibility of a fix because of boxing’s still-too intimate connection with the underworld, there is no shred of evidence or plausibility to support the suggestion that this was anything but an honest fight, as was the previous Clay-Liston fight in Miami Beach …

“The knockout punch itself was thrown with the amazing speed that differentiates Clay” – interesting that both Murray and Maule, two of the leading sportswriters of their day, were still referring to Ali by the name he had discarded – “from any other heavyweight. He leaned away from one of Liston’s ponderous, pawing left jabs, planted his left foot solidly and whipped his right hand over Liston’s left arm and into the side of Liston’s jaw.”

Let’s do a forensic examination of the evidence and see if, fifty years after the fact, we can reach a conclusion.

If you watched the fight at regular speed, try looking at the knockout in slow motion.

In slow-mo, it’s easy to see the impact of the punch: Liston’s head shakes like a bobble head doll’s. So much for the “wispy, theoretical mini-hook.”

In their fight issue, SI ran a four picture sequence of the punch, noting that “The blow had so much force it lifted Liston’s left foot, upon which most of his weight was resting, well off the canvas.” You can even see the shadow of Liston’s left shoe on the canvas.

Simply put, Liston walked – lunged, actually – right into it, doubling the force of the blow.

And yet, that might not have been the punch responsible for Liston’s destruction. Watch the fight one more time. At a little more than a minute, 1:07 after the bell by my count, Ali connects a short chopping right directly to Sonny’s jaw. The punch is almost identical to the “Phantom Punch,” which comes about thirty seconds later. If that first punch doesn’t look so hard, look at it from another angle, the one on the cover of the June 7 SI: 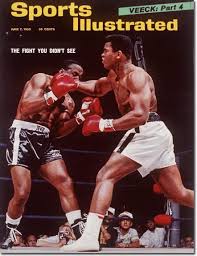 From this angle, Liston looks as if he’s just taken a two-by-four to the face. Such blows landed early in a bout, before a boxer gets untracked, can scramble his senses, leaving him dazed though still standing. The first right was a set-up; you can see it because of the angle it’s thrown. The second was the coup de gras which couldn’t be seen clearly because Liston’s body obstructed the only camera angle.

Today, there would be three or four different angles and no mystery about the punch. Ali’s right was on target, but even The Greatest couldn’t KO a myth. No doubt we’ll be going all this again in another fifty years.

Also from Barra: You fight aficionados gotta love this discussion of the Ali-Liston fight on ABC’s Wide World of Sports, May 29, 1965, with former heavyweight champs Jack Dempsey and Rocky Marciano and Sportswriters Jimmy Cannon and W.C. Heinz, hosted by an amazingly young Howard Cosell:

Looking at that slo-mo, that had to have been a combination of speed and luck. Ali reacted to an opening with a quick pop on the temple that caught Liston by surprise; to me that also signifies how strong Ali was to have elicited such a reaction from a blow that clearly (and luckily for Liston) wasn't full force. Yet if you hit anyone in such a sweet spot, you don't need full force to knock them down.

Reminds me of Bruce Lee's one inch punch. The force does not come from the arm, but the whole body.