< Stuck in the Middle With You      BGS: Mel Brooks Says This is the Funniest Man in the World >

August and Everything After 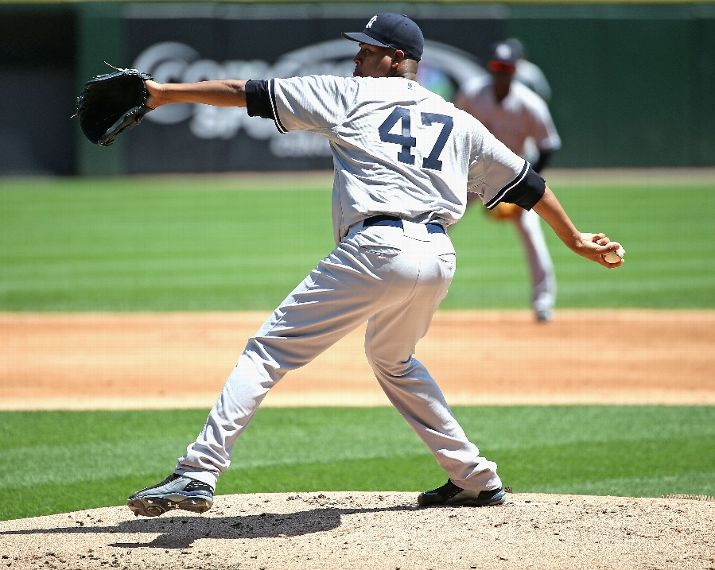 The Score Truck has been rumbling through the streets recently, and the Yankee bats were out in force again on Sunday afternoon in Chicago, piling up twelve runs against the White Sox to wrap up another series win and a successful 6-4 road trip.

Jacoby Ellsbury got things started when he jumped on the second pitch of the game from Chicago’s Jeff Samardzija and drove it into the stands just to the left of dead center field. Samardzija seemed to settle down as he retired nine of the next eleven Yankee hitters after that, but then the fourth inning happened.

It all started innocently enough. After striking out Mark Teixeira for the first out of the inning, Samardzija fooled Brian McCann enough to induce a weak pop up to the left side. McCann slammed his bat down in disgust, but the ball was headed towards the Bermuda Triangle between left field, center field, and shortstop, and it fell into the grass for a single. Carlos Beltrán followed with a four-pitch walk, and then Chase Headley singled to load the bases with one out.

Stepping up to the plate was Didi Gregorius. If they had an award for Comeback Player of the Year within the year, Gregorius would win it in a landslide. After hitting .206 in April, Gregorius hit a robust .317 in July to bring his overall average up to a more-than-respectable .260. He’d end up hitting .438 on this ten-game road trip, and it’s gotten to the point where I actually expect him to come through in important situations. So I wasn’t surprised at all when he poked a single into left center to plate McCann and Beltrán (with a nifty slide) to give the Yanks a 3-0 lead.

Next up was Stephen Drew (don’t look now, but the average is almost up to .200), who naturally singled to load the bases again for the top of the order. An Ellsbury sacrifice fly to the wall in center field pushed the score to 4-0, but with two outs and runners on second and third, Brett Garnder’s at bat felt huge. Sure, the Yanks already had a four-run lead, but a base hit in this spot would bury the ChiSox, and Gardy provided just that as he shot a single to the second baseman’s right, throwing two more shovels of dirt on the Sox and bringing the score to 6-0.

Those six runs would have been enough, but the Bombers weren’t done. They’d add three more in the next inning on a Teixeira home run (his fifth in the last four games) and a two-run double from Drew, then three more in the seventh on a two-run triple from Drew and an RBI groundout from Ellsbury for an even dozen runs.

But as impressive as that offensive performance was, the story of the game was Ivan Nova. We know that this Yankee team will score runs (the OPS numbers of the top five hitters in the lineup look like this: 729, 824, 918, 958, 789), but with Michael Pineda recently landing on the DL, Masahiro Tanaka showing signs of regression, and CC Sabathia being CC Sabathia, suddenly we’re counting on an awful lot from Nova, Nathan Eovaldi, and a kid who still hasn’t thrown a pitch in the major leagues.

All Nova did on Sunday was dominate the White Sox hitters with a strong fastball, a confident breaking ball, and a diving sinker. The only hint of trouble he faced in the early going came in the third inning, and it wasn’t of his doing. After Adam Eaton singled with two outs, he stole second and advanced to third when McCann’s throw squirted into center field. The score was still only 1-0 at the time, so Eaton carried an important potential run with him, but Nova quickly extinguished the threat with a strikeout, one of seven he’d pile up on the afternoon.

Nova did yield a run in the sixth on a walk, a fielder’s choice, and a ground ball base hit, but he did so with a nine-run lead. He seemed a bit irritated, but he recovered nicely to strike out Avisail Garcia on three pitches (three swings and misses) to end the inning and put a cap on his six-inning performance. Final score: Yankees 12, White Sox 3.

So things are good in the Yankee Universe. They’ll bring their six-game division lead back to Yankee Stadium for three games against the hapless Red Sox, and they won’t have to travel out of the Eastern time zone until a potential playoff game in someplace like Houston, Kansas City, or Anaheim. Better still, only 24 of their remaining 58 games will be played on the road, and three of those road games are against the Mets at Citi Field. While teams all around the league have retooled and traded prospects for a shot at the brass ring, the Yankees just might be in better position than any of the other contenders as we head into August and September… and October.

Nice tidy report, Hank. I like that last line the best. Being a Yankee fan when the Yankees are winning is like getting a extra free spin on the Tilt-a-Whirl with that girl you like but are not quite sure she likes you yet. Patience, boy, night is falling and the fireworks await.

First of all, the Yanks are better than a .500 club, particularly at home where they play 34 of their remaining 58 games. If the Yanks go just 34-24, then the pressure really ratchets up.

Second, I realize the Yanks have 13 more games with the Jays, and 6 more games with the O's. But the Jays are really going to have to win 9 of those games to make things interesting. If they go 8-5, they'll only take 3 games off the lead. And the Orioles had better win 5 out of 6.

Again, I just don't see it, unless Pineda is done, Severino disappoints and Tanaka goes down too.

I am still crazy nervous about how the rest of the season will play out, and I am usually not this skeptical.

Life is good for us right now.
Can't wait to see Severino on Weds.

Imagine a rotation for a few yrs consisting of Pineda, Nova, Tanaka, and Severino?
Not too shabby.

The only downside I am seeing to the Yankees making a playoff run this Fall is that I'm moving back to the EST, so the games are gonna end later.

I used to dread August in the 1980s. Yanks always seemed to be in first place on August 1st and in a tailspin by August 30th. Wasn't until '94 that they seemed able to play the entire season.

One thing I learned during the great Torre years is a 15 or 30 day stint on the DL seemed to help pitchers remain effective into October. Was always glad to see a "sore arm" or "tendinitis" strike in June or July; the mid-season rest seemed to help out in the Autumn.