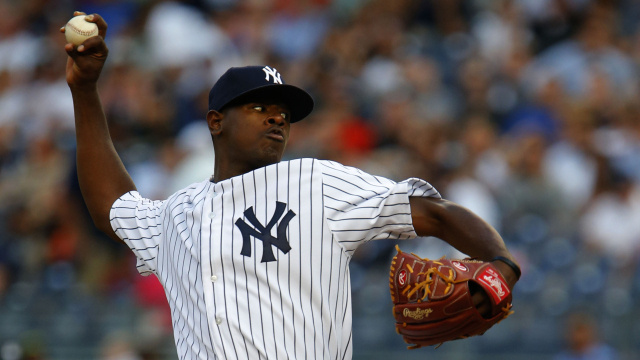 Luis Severino has a plus fastball and at times last night he had a sharp-breaking slider and a decent change. He didn’t pitch deep into the game–and was done a disservice by Chase Headley who made another throwing error–but he made a good impression in his debut. The Yanks were stymied by Steven Wright–the other Steven Wright, though it is fitting that a guy with that name is a knuckle ball pitcher. And they had the tying and wining runs on base in the 9th when pinch-hitter Brian McCann flew out to center field to end the game. Near miss and bummer of a loss since the O’s and Jays both won.

Speaking of Steven Wright I once saw him in the lobby of the Brill Building. This was 25 years ago. He got out of the elevator, wearing an old Red Sox cap. I just looked at him and said, “The Red Sox?” And in that monotone voice he looked at me, deadpan, and said, “Well, I’m from Boston.”

I felt for the kid after Headley's error. Headley looked pretty pissed too, and Tex usually can dig those out.

Headley is lucky that Tex is at first or he would have had even more errors this year. (I hope he doesn't end up with Sax/Knoblauch disease). He has been much better of late, but damn!

Severino looks really poised out there, and I think he is going to make a big contribution this year. It is hard to get a feel for how successful he will be going up against the lowly Red Sox, but the kid has some serious heat, and looks ready for the bigs.

He looked pretty unhittable to me, and I think his control was a bit off and will improve.

This whole Yankee rotation is being held together by a chewed up piece of gum, and we really need someone to step up and be the man. Why not a 21 year old kid leading the way?

1) Why not indeed. Wonder if CC has ANYTHING left in him? They sure could use him tonight going into the tough Blue Jays series.

The Jays have all right handed hitters. CC cannot pitch against them so he has to go tonight. I hope he has the grace to step aside if he gets lit up again.