You Should Know Better 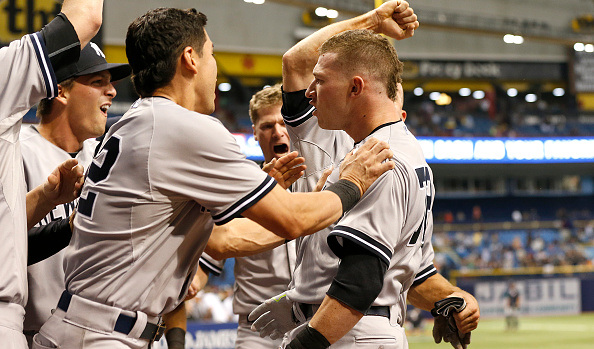 The Yankees didn’t get their first hit until the top of the 8th inning last night so you can imagine how we felt round these parts. In the words of Bob Gibson, “shitfuckpiss” about summed up the mood. No-hit by Erasmo Ramirez, believe it. Never mind the fine performance C.C. Sabathia delivered–one of his best of the year–this was pitiful. Or was it unlucky? The Yanks hit the ball hard, it found gloves. But our frustration was real. And it deepened when the Rays scratched together a run in the bottom of the 8th.

It peaked in the 9th after Dustin Ackley singled and then the slumping Jacoby Ellsbury hit the first pitch right at the first baseman who started a double play.

Worst loss of the year, I thought, though I didn’t say it out loud because I say that roughly a dozen times each season and the effect seems to be lost on The Wife. Self-pity doesn’t get me anywhere with the woman.

But there it was, a sure candidate for worst loss of the year. Then Brett Gardner walked and stole second. He came round to tie the game when Alex Rodriguez pounded a line drive to right center field, good for a double.

I got my ass off the couch, threw my fists around in the air like a spaz and clapped loud enough to clear the room of all cats.

Brain McCann was walked intentionally and then Slade Heathcott–who’d come in as a pinch-runner for Carlos Beltran in the 8th–swung at the first pitch he saw, a high fastball out over the plate. He hit it to left field and it kept going until it landed in the first row, a 3-run home run. Now, I was up again, and yelled loud enough to make my throat scratchy the rest of the night.

To celebrate improbable 4-1 win? It was worth it.

Once in a blue moon if the 2nd out of the ninth is egregious enough I change the channel and forget the game. Glad that didn't happen last night. I yelled as quietly as I could when Slade homered as there was a sleeping baby upstairs. Still freaked the dog out enough to slink upstairs. He then came down and went back up for a while because he didn't know what to make of me. lol....
Slade Heathcott looks like Shute from "Vision Quest." FWIW.... : )

It wasn't quite Aaron Boone -leaping five feet in the air squealing "Wow!", but if I had seen it I probably would have done a Bruce Willis Die Hard seeing fire coming at you from the bottom of the elevator shaft "Holy SHIT!" >;)

I love it when Good CC reappears. His era is finally under 5 at 4.93. It would be fun if he catches lightening in a bottle ala Aaron Small in 2005, and then carries it into the postseason. If he does that though I suppose we'll be comparing him to earlier CC seasons as opposed to Small or Moose in 2008.

I went on an emotional roller coaster the last half-hour of that game. Hopefully, tonight is an easy win for us!