Boone Over Bam Bam in the Boogie Down Bronx 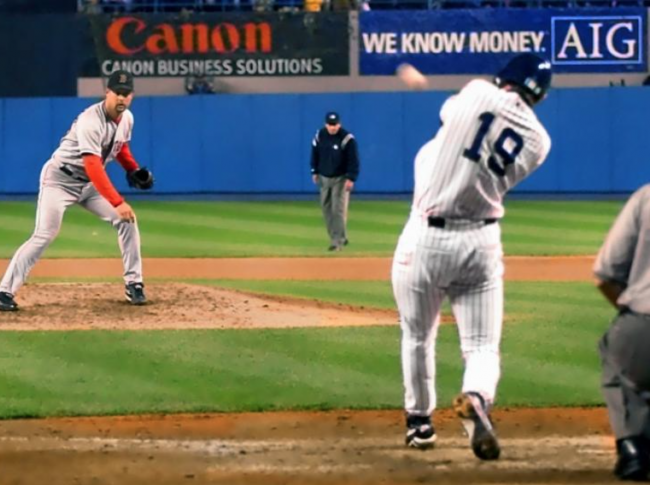 Aaron Boone will be the new Yankee skipper. Yanks hope the neophyte can be a New Age Joe Torre and lead this young team to big time success. On the surface, Boone doesn’t exit me, but then again, a) he doesn’t need to be exiting to be good, and b), what the hell do I know? Wishing him the best of luck regardless now that he’s got the gig.

And away we go…

Let’s get this out of the way: they’re not booing, they’re saying Boooooooo(ne).

Hot damn! Mospeed, Aaron. And if he ever rolls his ankle Alex can always fill in.

Wow. Shocker. I would have thought he was just a list-padder, but I should've also known Cashman would never do that.

Get ready for Marvin the Martian as manager (voice anyway).

Totally inexplicable (from the outside). Never been a coach, never said a single interesting or insightful thing as an announcer. What could he have possibly said in the interview? Was it really so much better than Bam Bam Muelens who has been a long time coach, speaks Spanish AND some Japanese, and has Yankee ties as well?

Again, form the outside we just can't know. But dropping Girardi for someone with zero experience seems very odd...

Actually, his co-announcer Jessica Mendoza seems more qualified, from the outside. ;>)

I’ll carry over my comment from the last thread:

“I liked his (Bam Bam) perseverance as a former prospect turned baseball lifer. Seemed like a perfect fit for this young team and they supposedly liked him a whole lot. But he gets to go back to San Fran and be bench coach in 2018, so good for him. He’ll be somebody’s manager in no time

Hmmm. Though Boone has no experience as a manager or coach, his “standout qualities” are that he is a baseball lifer (third generation MLB player), he has a mind for the game that was apparent in his playing days (according to anecdotal evidence from certain other players, including our own C.C.) and he “makes people feel easy and comfortable” (which apparently is a pendulum swing the other way from Girardi). So essentially, he’s a wingman!

He’s a neophyte like Dave Roberts and A.J. Hinch were (and he’s connected to those two as they’ve competed against each other since college), so the front office will have it easy in providing input (managing behind the scenes) with analytics. Such is the latest trends in baseball. Don’t like it much, but I have to trust Cashman on this one; he tends to see things most people don’t.

I also guess they’re hoping he’ll make Otani feel easy about what they want him to do if he does land here (and if it’s not exactly what he envisions). Cashman promised to go hard for him after this; to be honest I’m not entirely sold on him, but he is young and won’t cost an arm and a leg in the beginning. I’ll have more thoughts as the leaks start to spill out…”

Serious question. How many WS winning managers in the past 30 years won with the first team they managed with, with zero prior coaching experience?

This hiring was very uninspired to me. But i'll hope for the best as always.

FWIW, Jim Bowden on MLB Radio said this was a home run pick by Cash, and that Cashman will be a HOF'er who hired Torre, Girardi, and Boone. Cashman already the GM with the most wins, may end up with most rings, too. Question to me: whether there will be great pressure on Boone to win now (it's the horse, not the jockey), or if he'll get a bit of a break since he's a newbie. (Doubt it.) When do the Yanks get to Fenway?

Ohtani...how could you????? Enjoy the lattes and boring people on the west coast. We don't need you or your amazing filthy pitching, blazing speed and leftyt power anyway! Feck OFF!

(Runs to sob heavily in the corner...)

[10] Cashman didn't hire Torre, that was Bob Watson. Jim Bowden sucks on so many levels...

Cashman needs this to work out badly. He's pretty much won the battle of the front office factions, now he needs to define his legacy beyond inheriting a dynasty-in-the-making.

Gotta say this, though, the man really has a plan. He's not fucking about.

[13] Thanks for correcting the record. Bowdon does not always impress me as much as he impresses himself.

For example, he said (Friday?) that Yanks should not go after Stanton, but wait for Harper next year. I love Harp, but Stanton is the superior player IMHO. OTOH, we might be able to get Harper without a loss of prospects and every day players. If the Yanks stay under the lux tax this year, they could go after Harper or Machado next year.

[15] No problem, btw here's something to consider with possibly signing Bryce Harper and/or Machado...

[16] - While it is true that Harper is a talent, I really wonder whether he'd be willing to subsume his ego with the Yanks. He did it in DC, because Zimmerman was the unquestioned leader of the club when Harper came in as a rookie. Not sure how he would relate to the Yankee young guns with a salary bigger than all of their combined - and more MLB time too.

That certainly is a consideration. But I think between Gardner, Sanchez, Judge, Didi and perhaps C.C. if he’s re-signed can reign in any challenges he might present; At any rate, I trust Cashman has a good read on the pulse of the clubhouse (which is the stated reason why they chose to move on from Girardi).If Harper we’re to present a challenge in that regard, there’d probably be a few advisors (Reggie, O’Neill, mayyy-be A-Rod, etc) to put him in check, or they simply don’t sign him and we all breathe easy that he’s not here to disrupt the chemistry.

I suppose one good thing about not landing Ohtani is that there won't be pressure for the Yankees to open the season in the Tokyo Dome with Tanaka and Ohtani pitching back to back.

I wanted Bam Bam. He speaks five (!) languages, including Spanish and Japanese. I am guessing Boone only speaks one. Right there Bam Bam would have been the better communicator.

I give credit to Boone for being honest about his injury. It cost him millions of dollars. Most people would have "slipped" in the bathroom or something.

I wonder if having a manager that spoke Japanese may have helped Ohtani keep the Yanks in consideration for longer.

Likely not. He wants a small market team on the west coast (closer to home). Let’s not forget that he’s still a kid compared to the other stars who came over before him (at an older age and with more pro experience to boot). RAB reported that Otani’s agents begged him to reconsider, but he was already on the Nope Train to the west. As for a Texas and Chicago, Texas has the most money to offer and Chicago has Theo, a legendary chip from two seasons ago and an opening or two. Doubt either will get serious play; could be for show to sort-of mask the obvious. I do admire the kid for using his leverage to get what suits him best; if he’s not getting the guaranteed money up front in his first couple of years, he can at least find his own lab where he can experiment with being a pitcher/DH type.

Whether that speaks to his personality is something else: does he want to be the big fish in a small pond? Is he hedging on talents translating well across the pond? Is he seriously pushing the pitcher/hitter throwback thing, knowing big market teams would not risk it? Is he really a big kid at heart stepping into an unknown and possibly hostile environment, trying to cushion as much as possible? Or perhaps he’s sincere and wants to challenge himself in a unique manner, all BS aside? Anything’s possible...

Can’t blame him for wanting no parts of New York straight out the box, but he also missed a great opportunity as well. The Yanks are a strong, young and fun team with a very deep farm system that could have nurtured his development as they had with their current young stars. There definitely would have been a place for him up top if he hit all his marks. Oh well, don’t look back now, kid, get yours and enjoy the ride.