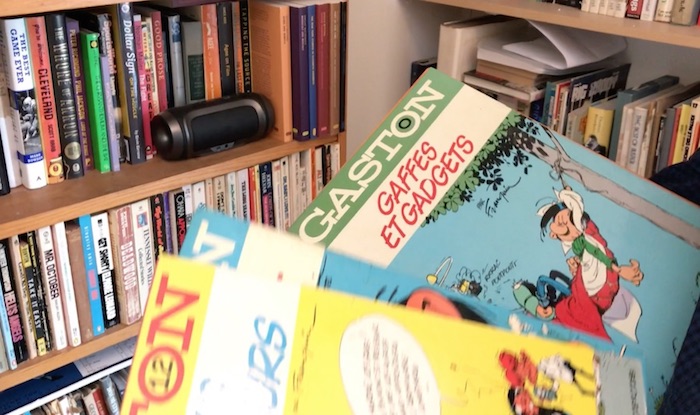 Aw, man, my apologies for being remiss in this space of late. Hope all is well and that your Thanksgiving was plentiful.

So interesting that the Yanks don’t have a skipper yet. Can’t wait to see who it’ll be. Been a still off-season so far. That won’t last forever. Hey, you hear that Aaron Judge had surgery on his left shoulder—maybe that accounts for his second half swoon. If so it makes what he did even more impressive.

Categories:  1: Featured  Art of the Night  Arts and Culture

Happy whatever is left of your Thanksgiving everyone.

I’m in favor of Bam Bam for next manager. Some rudimentary baseball Japanese, knows what it’s like to bea Yankees prospect - and the failure, paid his dues. Plus the manager really is the face of the organization.

I hope all had a great holiday. It's really strange to have no manager for so long. I would think they would want to have someone in place soon and preparing for next year.

Hope all had a wonderful holiday. Thanks for posting, Alex. As to the manager, Bam Bam might be nice, but I still like the idea of Aaron "f*ing" Boone going into Fenway.

I'm so not into A.Boone. Never heard him say anything remotely insightful on the ESPN game of the week, and he has no coaching experience.

[4] I'm not seriously saying he'd be a great manager. Just that I'd love to see him at Fenway.

I don't mind the wait, honestly. This is a critical crossroads for the Yankees, and getting the right person to manage this primarily young team is more important than we give it credit for. Given the pretty fast come-up for a team that two years ago was hosting retirement parties/eviction processes for ready and potential HoFers for half a decade, I'd say that Cashman and Hal have been pushing most of the right buttons so far, and also given that they've been pondering this question for three seasons already, I'm willing to give them all the time they want this off-season to make what they think is the right choice. It may not be my choice (Bam Bam), but if they make a choice they have no reservations about, I'll trust that they got it right.

Girardi wasn't a bad choice when he was hired; after a reboot in 2008, he led them to a chip in his second season and stayed in the playoff picture to the end. But a lot can change in ten seasons. Whoever's next, I can't imagine even that person getting past year ten without significantly changing or having had changed their approach.

Yanks interviewed Carlos Beltran today; reports say he’s eager to take any coaching role so long as he gets to help young players. He’s got a good baseball IQ, so I can see the team bringing him on in an instructor role and he learning to coach or manage in the minors. With that said, would they not also interview Cone and offer him the same deal?

[7] Don't like it. How many first time managers with zero coaching experience do well? Starting to lose faith that Hal & Cash know what they are doing with this search..

[8] I think it's more of a courtesy to Beltran, who was a "good soldier" type and was fairly productive when healthy (maybe moreso than Matt Holliday, whom I could also see them trying to retain as a coach/player development instructor type) and they would be more interested in retaining him as a consultant/coach-in-training.

For that matter, they supposedly expressed interest in Raul Ibanez until he said no thanks. Luckily, Ibanez seemed to not be letting his ego do the talking for him, and I don't think Beltran is either. Boone and Cone, on the other hand... I dunno. Word is Boone interviewed well and that he and Bam Bam are the top two candidates thus far. If that's the case, I don't mind that they want to take their time and interview a few more people before making any decisions.

I believe what it'll likely come down to is who, while having the prerequisite knowledge of and effective experience with analytics, is willing to take input from above while managing the clubhouse and the media effectively. Girardi was visibly straining in one, maybe two of those aspects.

As to your question about managers with no experience doing well, remember that this is a different league than it was even ten years ago; analytics has taken a stranglehold on the way the game is structured and played and every team in baseball has a guru or department of statisticians for the sake of creating what they hope are winning algorithms. Actual coaching experience should not be a diminished value for a new manager, especially when you are coaching a much wider variety of player backgrounds and origins than ever, but teams are in the process of testing the limits to how much or little experience is practical or "optimal" as people would have it now. Look at general managers; how many general managers now are the ones who worked their way up the chain through various departments and are on their first GM job versus those who are retreads from other organizations versus college graduates with analytics in their resume being appointed based on that alone? I kinda wish I knew, but I have a feeling that the traditional avenues to the top (illustrated well by Brian Cashman) are disappearing. Now that stat-addicts run the teams, you'll likely see more managers and coaches being hired for their willingness to use analytics and allow the front office to basically co-manage, which means you'll likely see guys with less experience and therefore less leverage to manage the game on their own terms.

Hoping that's not the case here, but Cashman has already stated his desire to find someone who can handle certain conditions mentioned above, so I won't be shocked unless it's someone we never heard of in any scenario. For the record, when Torre was hired before the 96 season, I was not skeptical of his experience (he had a mediocre record in three previous tenures with the Mets, Braves and Cardinals despite winning manager of the year once or twice), I was skeptical of how New York would take him, and it didn't start well as we all know. Anyone taking the job now is going to be on the hot seat from day one because of the talent and expectations for this team after coming within one game of going to the World Series. You don't bring the manager back after a season like that, you had damn well better justify that decision; Torre certainly did and so did Girardi to a lesser degree.

Yeah, Will, playing it close to the vest!

Looks like it’s down to Bam Bam and Boone

[14] Me too. I liked his perseverance as a former prospect turned baseball lifer. Seemed like a perfect fit for this young team and they supposedly liked him a whole lot. But he gets to go back to San Fran and be bench coach in 2018, so good for him. He'll be somebody's manager in no time :)

Hmmm. Though Boone has no experience as a manager or coach, his "standout qualities" are that he is a baseball lifer (third generation MLB player), he has a mind for the game that was apparent in his playing days (according to anecdotal evidence from certain other players, including our own C.C.) and he "makes people feel easy and comfortable" (which apparently is a pendulum swing the other way from Girardi). So essentially, he's a wingman! :/

He's a neophyte like Dave Roberts and A.J. Hinch were (and he's connected to those two as they've competed against each other since college), so the front office will have it easy in providing input (managing behind the scenes) with analytics. Such is the latest trends in baseball. Don't like it much, but I have to trust Cashman on this one; he tends to see things most people don't.

I also guess they're hoping he'll make Otani feel easy about what they want him to do if he does land here (and if it's not exactly what he envisions). Cashman promised to go hard for him after this; to be honest I'm not entirely sold on him, but he is young and won't cost an arm and a leg in the beginning. I'll have more thoughts as the leaks start to spill out...

Gary, you get your wish, Merry Christmas! >;)

I'll say something else: remember how many people were mad that Girardi got the job over Mattingly? At this point, as long as Boone doesn't walk in front of any buses, analyze to anyone in public or think too much for himself, he should be alright...