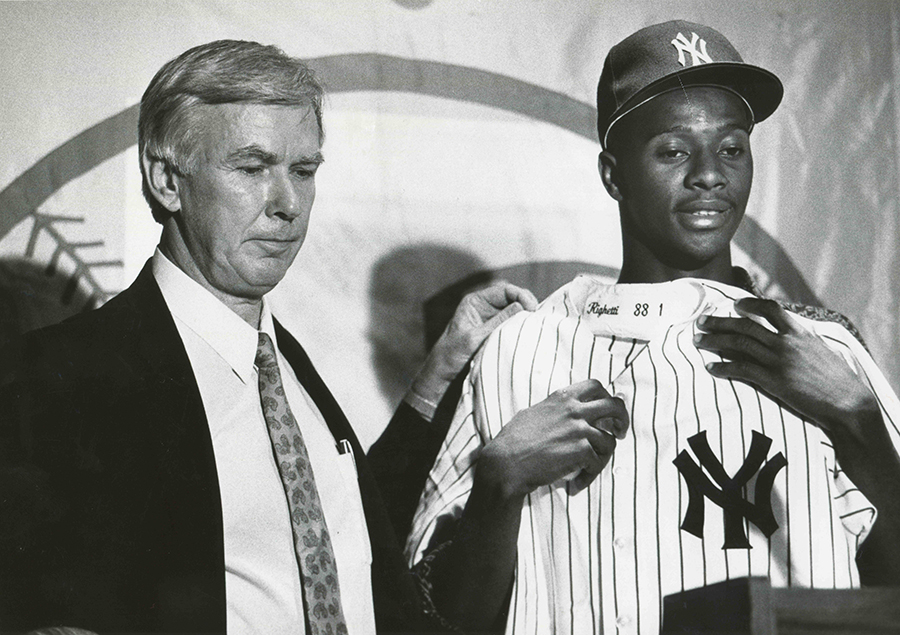 The year 1991 brought reality to the Yankees; the turnaround from George’s style of management to something more akin to the rest of baseball was not going to be a quick fix. Michael was not going to land the biggest fish in the ocean because George said so, and at this point it wasn’t looking like anyone of true All Star caliber was interested in joining them. Aside from soon-to-be All-Star ace Scott Sanderson and hard-luck starter Tim Leary (who was involved in a dicey trade with the Reds for future good hitter Hal Morris) and perhaps Roberto Kelly, Kevin Maas, Matt Nokes and some kid named Bernie Williams, there wasn’t much to speak of about the 1991 Yanks (well, besides Mel Hall terrorizing Bernie in the locker room among many other things).  Stump Merrill was in his first full season as Yankee manager, having taken over from Bucky Dent, who was shockingly fired while in Boston for a series with the Red Sox in 1990 by Steinbrenner, a month or so before he himself was “fired” by baseball.  Stump continued the status quo with the major league team, losing far more games than winning through little fault of his own.

Hey, remember Pat Kelly? He was kinda touted as the second basemen of the future while with the Yanks, and he stuck around long enough to win a ring with the 1996 team, although he only played 13 games the whole season. But how many remember that in 1991, Kelly was a third baseman? He came up as a replacement for the recently-departed Mike Blowers, who was traded to Seattle for a bag of balls. Blowers for his part would become a regular with Seattle, so he would qualify as a player who was (much) better somewhere else, like Jay Buhner before him. Kelly switched to second in 1992 and remained there for the entire tenure of his career with the Yanks and beyond.

Scott Kamieniecki is definitely a name that stands out; he was one of their best pitchers during the dark ages if you will, but I somehow misremember him as being in the rotation in the 80s. I guess when you have Chuck Cary, Richard Dotson, Ron Guidry and Dave LaPoint on your staff at any given moment, you’re going to misremember quite a few things (and try to forget others, like giving away Doug Drabek, grrr…) Kamieniecki was not the best pitcher on staff, but the fans knew him well enough over the next few seasons and I suppose you could consider him one of the Hard Luck Boys of the early 90s. Hard luck followed him into the championship days as well, when for whatever reason, the Yanks decided not to give him a ring for being with the team in ’96, though he spent much of the year on the DL. He later blasted the Yanks for “strong-arming him to the DL with a fake injury” and for “putting on a show” by having him sized for a ring that he never received after the team was criticized for leaving him and a few other players out of the ceremony. He was definitely not a fan of Joe Torre, whose glare at certain players was an automatic ticket to the Doghouse, if not the kiss-off to their Yankee tenure.  I’m guessing though Scott and the Yanks have pretty much made up at this point…

Steve Howe was interesting. He had been out of baseball for four years before the Yanks signed him, and he was very effective most of the time.  However, he was a drug addict throughout most of his career well before coming to the Yanks, so much so that he had already been suspended several times. It was his effectiveness as a reliever that kept him in baseball, and though he was banned for life the next season, he was reinstated upon appeal and went on to have one of the best seasons in his career. There was a lot of debate about him while he continued to play, get banned and then be reinstated; was the league enabling his habits because he was a good pitcher? Howe wasn’t the only player who had a drug problem, but he was probably the only one who kept coming back after falling down the well many times. As things go, Howe’s Yankee (and MLB) career was ended with him being released in June 1996, making him indeed a member of the Hard Luck Boys. Sadly, his ignominious death ten years later in an accident that eerily resembled Billy Martin’s death has rendered him a cautionary tale of the glamour of the baseball life. Say his name and/or look him up on Wikipedia and you just can’t help but shake your head and wonder, “why?”

Scott Sanderson, on the other hand, was a legit anchor and ace of the staff, as it were. His two seasons with the Yanks were good enough to hope that any of your five (six?) starters for 2018 could at least match. In a fairly solid career with the Expos, Cubs and a good season with Oakland prior, 1991 would in fact be his first and only selection to the AL All Star team. He became a partner at Moye Sports Associates in 1996, who currently represent Austin Romine and Jaime Garcia. However, his moralizing during and after his career could be considered problematic to some (particularly in New York)…

Here are the moves the team made prior to and during the season:

With the release of Wayne Tolleson, the Yanks could now tell who was who between him and Alvaro Espinoza. Tim Leary was drafted by the Mets in 1978 and spent his first four seasons in the majors there before he managed to win a ring with the 1988 Dodgers. Rick Cerone had the last of three stints with the Yankees, previously having been a starter from 1980-84 and a backup in 1987.  Mark Leiter, like his brother Al, was sent away and became a better pitcher with his next teams, but unlike Al, he never returned to the Yanks. Torey Luvullo? Pat Sheridan? Scott Lusader…? Balboni would try one more season in 1993 with Texas before saying bye-bye to major league baseball for good.

My goodness. I thought this was going to be an easier post because the 1991 team was pretty bad, but when I started looking deeper into certain issues; in particular with Mel Hall, I ascertained a few things:

1. ) It's really hard to find the proper words to react to what Mel Hall had done in and out of baseball. There is a whole lot we took for granted, and after reading in more detail about the things he did, I was emotional. If I had kids, I would sit down and talk with them right now, for a long time. I was going to link the article, but a paragraph in the end alluded to some nameless idjits trolling various sites and endlessly defending Hall, and I don't want to draw that kind of attention here.

2.) Hall wasn't the only one who picked on Bernie. Several others followed suit and called him "Bambie" among other things. It wasn't just one person or one thing that nearly drove Bernie to the point of tears. Steinbrenner was really hard on him as well, and both Watson and Cashman nearly got rid of him or tried to replace him at various points. But Bernie always led the way back off the ledge. I have tremendous respect for Bernie. I do have to wonder whom it all were who were picking on him at that time, but to take from this article, in the end it didn't matter because they faded into obscurity.

3.) I also have tremendous respect for Stick for putting an end to the bullying. As I said, Merrill basically was status quo about the clubhouse, which was probably an unspoken reason for him being replaced by Showalter, who was among other things meticulous and no nonsense. I'll have a short blurb about Showalter in a future post that you'll find interesting.

Still waters run deep. That 1991 team may not have been as dysfunctional as the 80s Mets teams, but it was not a happy place to say the least. Next time we hear about athletes complaining about dysfunctional locker rooms (looking at you, NY Giants), I'll think about what I read about this clubhouse.

"With the release of Wayne Tolleson, the Yanks could now tell who was who between him and Alvaro Espinoza." Brilliant!

Am sure Stump Merrill is a good guy but hard to believe he managed the NEW YORK YANKEES..and he was ONLY 47 that season?? He looked 65..

Thanks for this series, Chyll.

I was sitting in my beanbag munching popcorn watching a meaningless game, when suddenly lots of fans got up and cheered for some unknown reason. Not sure if Scooter had left by that point. Then it was announced Steinbrenner had been banished for life.

Listening to an interesting and compelling interview of George Steinbrenner by Mike & The Mad Dog in June of 1990 (probably right before his banishment); everyone coherent and at the top of their talk game. George was gusty, but humble and agreeable; admitting that he had made mistakes in his tenure, but adamant about the players and coaches he respected (how much of that was purely for show is anyone's guess), while Francesca and Russo were not only listenable, but astute and not pulling punches with their questions. History would prove George the winner of the debate, but FranDog did represent the fans' curiosity very well. Interesting how you can almost sense the reflection in Steinbrenner's manner right before the boom was lowered; he was negotiating the terms of his punishment at the time, so it's possible he either made up his mind or was preparing for the worst. The two were right to be skeptical about half the things he said (I don't buy at all that he had little to do with either Rickey or Winfield being traded), but they all acquitted themselves pretty well.

I don’t think Stump is a bad guy under the circumstances. We don’t really know if he was tolerant of what went on or not or to what extent he addressed it; only the people who were there could tell us, if they even would. But it’s telling that the only mentions of those in the management side concerned for Bernie being bullied were of Stick and George; Stick directly addressed it. Showalter had some insight having been a coach in that locker room, but he said something later that I found interesting that I’ll highlight in a later post.

And yeah, who could tell the difference when in uniform besides the numbers on their backs? At least Tolleson tried to be a hitter though. And at first I thought his son Steve was a better version of Dad, but upon further review, apparently the apple didn’t fall far from the tree.

Brandon Drury? Who is he, and are we going to have to call him the Muffin Man?

If Sterling lurks here, bonus points for it being your fault.

Drury is about the same player as Hedley, but younger and cheaper.

[6] How about "that's Brandon with abandon!" or maybe, "That one is down Drury Lane"