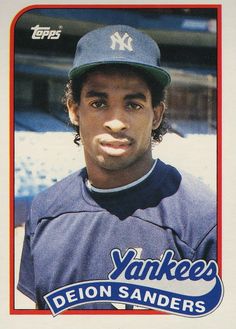 Honestly, this was the best card picture of him as a Yankee that I could find. He looked downright miserable in others. Not that anyone could blame him at the time.

I decided to begin with the year 1990 for one reason: I believe this was the year that the perennially contending Yankees as we know them actually began, with the ouster of Steinbrenner and the functional head of the organization now being Gene Michael (Steinbrenner’s last official act as managing partner of the Yankees was to fire the current GM Harding Peterson in favor of Michael), the Yanks began the process of reinventing themselves into an organization that valued growing and developing players first, rather than simply being the highest bidder for the biggest star in the free agent market, or trading away developing prospects for tried-and-true veterans whom somehow either flopped or otherwise failed to live up to expectations.  Michael’s method valued potential over past results, and that method yielded some genuine value in both prospects and veterans (signed or traded for) who became franchise mainstays.

But within this process, there had to be players who either didn’t fit into the plan long term for one reason or another; perhaps they didn’t make the cut and were either relegated to the minors or released or traded, perhaps they were at the tail end of their careers and were basically picking up another check before they bid the major leagues adieu. Or, in some cases, they started out with the Yanks but didn’t make it with them, so they went somewhere else and became All Stars, or at the very least fan faves with another team.  Many will be surprised at who donned the famous pinstripes at one point or another in their careers.  Many know of the players who got a second wind with the Yankees after their stars had dimmed elsewhere; Strawberry, Gooden, Cone, Boggs, Fielder, Justice and the like.  But as we start with 1990 and make our way to last season, you’ll find names that would have never occurred to you unless someone (here!) brought them to your attention.  You can tell me if it’s fair or not to include them as “honorable mentions” or “who dat’s”, but that’s what I hope will keep the discussion lively. Feel free to contribute any stories about mentioned players that you might find interesting.

I’m going to build a key here and hope that it sticks:

Of that list, I had a little trouble categorizing Bob Geren, Claudell Washington,  Rich Monteleone, Oscar Azócar and Mike Blowers because they were known/heralded, but not great players. The last two in particular were part of a pre-Michaels youth movement that also had rookies Steve Adkins, Mark Leiter, Jim Leyritz, Kevin Maas and Alan Mills making their major league debuts in 1990. Of this group, Leyritz would remain as a fixture, Maas would become a fan favorite for a time (but never a productive cog in the the team’s ambitions as Leyritz would be), Mills would star in Baltimore (but was often foiled by his former team), and Leiter went onto greater things with Detroit among other teams. Hensley Meulens was very much heralded and made his debut in 1985, but by 1990 was pretty much a permanent shuttle inhabitant between Columbus and the Bronx. But he did become a fixture and hero of The Netherlands in the World Baseball Classic, and he almost became the Yankees’ new manager recently, so there’s that.

Deion Sanders obviously has to be the name that jumps out the most, but he was well known for being a two-sport star; at the time playing for the Atlanta Falcons. If he had not struggled in his first two seasons with the Yanks and had Bo Jackson not suffered the injury that effectively ended his sports career, not to mention his “Prime Time” persona that rubbed quite a few baseball people the wrong way, Deion might have had a longer career with the Yanks. However, Stick released him after an unproductive second season and contentious contract extension talks, saying that football was stunting his growth as a baseball player.  Perhaps this stung Deion in some way, or maybe the ease of being in the same city for both professions helped; when he signed with the Atlanta Braves, he suddenly became Bo Jackson Lite and was an immediate contributor to the teams that won two NL pennants in 1991-92. Consider it one of Michael’s few missteps.

This was also Dave Winfield’s last season with the Yanks, before he was traded in mid-May for pitcher Mike Witt. We all know the story with Winfield, which led to George’s ouster, but Witt was formerly a solid, if not ace-quality pitcher with the California Angels until he suddenly lost his mojo, and after the trade it never came back, with Witt mercifully disappearing from baseball after little more than two seasons and a plethora of injuries.

Whoa, what a fun draft that was. There are quite a few others to talk about here, so look them up and ask away or talk about any that stand out beyond who or what I highlighted.  Do you think the indications are fair? You tell me.

Off topic, but Happy Itchers and Scratchers.

[0] Will, this was fantastic. What memories! Steve Balboni and Alvaro Espinoza...wow. I'm sure this was a lot of work but please keep them coming when you can!

[2] Yes, thanks! I won't be pumping these out every day; maybe every other day to pace myself properly and balance with work, but this is definitely a labor of love. I hope everyone enjoys!

I think Alvaro Espinoza may have written his own wiki page. If not, here's a decent examination of his career that might explain it. At any rate, he's currently a roving infield instructor with San Francisco.

As for "Bye Bye" Balboni, I was surprised/not surprised that he was drafted by the Yanks in 1978 and was their starting first baseman from 1981-83, which brings up our first instance of trivia: he was the last player to man first base before Don Mattingly, who debuted in 1983 (kind of a wild season) and platooned with Balboni until he was made the full time starter in his official rookie season in '84. Then, oddly enough, when he returned as a DH for the Yanks in 1989, he occasionally played at first, then was part of a platoon after Don Mattingly was DL'd in mid-1990. Here's a recent interview with him by MLB.com. Btw, although the Curse of Balboni has officially been broken several times, I think it's kinda sticking to Moustakas at the moment (unless he's signed by the time I finish this comment)...

Wow, I remember Deion. I went to Buffalo to watch a series with the Clippers in 89. This was when the Buffalo AAA team was drawing more than a half dozen MLB teams (north of a million fans over a shorter season.) Deion got on base a lot! He was picked off of first once a game, caught stealing more than once and stretched a couple hits into doubles. He was loads of fun to watch!
Didn't he get a WS ring with the Reds and then dumped water on Tim McCarver in the club house?