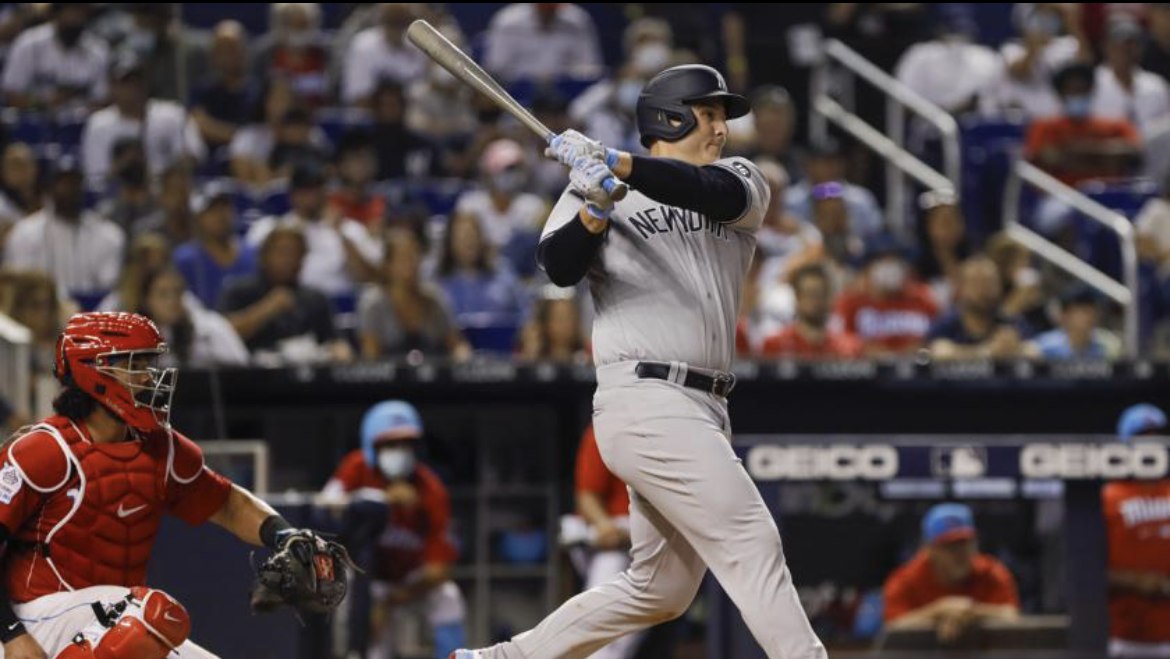 I like to imagine that somewhere out there are Yankee fans who were off the grid for a few months. They jumped on the internet the first chance they got, and lots of things were the same in Yankeetown.

The first thing they’d notice is that the team is still scuffling, teasing fans into thinking about a World Series one day, ripping their hearts out the next. They’d check on Aaron Judge and be relieved that he’s healthy and still one of the best players in the league. They’d see that Aroldis Chapman has a boatload of saves and has been lights out recently, no concerns there. (Don’t bother telling them; they’d never believe you.)

But then they’d look more closely, and nothing would make sense. Anthony Rizzo playing first base and carrying the Yankee offense? Joey Gallo in the outfield and providing another left-handed bat in the lineup? Rougned Odor at third instead of second? Jameson Taillon was American League Pitcher of the Month in July?

GIANCARLO STANTON WITH A GLOVE ON HIS HAND??? This is obviously the most preposterous development of the past season. After spending two years as a full-time DH, removing any lineup flexibility that would’ve allowed occasional half days for Judge or Gary Sánchez, Stanton is suddenly a versatile corner outfielder, looking adequate in left field one night and right field the next. (The irony of all this is that recently he’s been hitting like a utility infielder, continuing the Yankees’ season-long theme of “two steps forward, two steps back.” Nice for salsa dancing, not for baseball.)

If one those out-of-touch Yankee fans had sat down next to you on the couch for the series opener against the hapless Baltimore Orioles on Monday night, you’d likely have turned to your guest and said, “This is what I’m saying.”

The ballpark was buzzing, the Bleacher Creatures were in full throat, the lineup was delightfully staggered, and the worst team in the American League had generously tied a sacrificial lamb to the mound. You just knew that Rizzo or Gallo or both would launch bombs into the bleachers. You just knew that the momentum from the weekend’s South Beach sweep and the energy of the Bronx would push the Bombers to a big win. You just knew the season had turned.

But then Andrew Heaney, the newest Yankee starter, gave up four solo home runs. And then Jorge López and his 6.19 ERA carried a no-hitter into the sixth inning. And then Aaron Boone played the infield back with a runner on third in the eighth even though he was already down by five because probably even he knew how ridiculous the game had become.

It was one of those games, and if the outcome felt familiar it’s because the 2021 Yankees haven’t won a game in which they trailed by four runs or more at any point. Comeback Kids they aren’t.

Oh, and then Boone opened his postgame presser by casually mentioning that Gerrit Cole would miss his Tuesday start because he had tested positive for Covid. (Don’t worry; we’ve got Heaney.)

Somehow I still believe. Do you?

All this RISP hitting is making me giddy.

Stanton! Next up, double digits.

Pitching, hitting, and defense all in the same game?

Just got off a plane and was greeted with a 9-1 lead. Nice! And Luí Gil! Even nicer!

There it is, double digits.

But did I hear right, both Cole and Monty are out with Covid?

Yup, both have tested positive for the Wuhan virus. As has Sen. Lindsey Graham, who is fully vaccinated. So it doesn’t mean anything. Get tested for 100 illnesses and you’ll come up positive for some.

I know about the community guidelines, but I feel morally obligated to mention that people should get the vaccine if possible, and that referring to Covid as the Wuhan virus perpetuates and encourages anti-Asian hate. Okay, back to baseball.

The best thing about Stanton’s big hits is that whenever he’s up in those situations I expect his at bats to end with him flailing at a slider six inches off the plate. A three-run double? I’ll take it!

And now Gary Sánchez tests positive. Might be time to ask why this doesn’t seem to be happening to other teams.

But is it really not happening to other teams? I feel like there's been a steady drip of outbreaks throughout the year. Mets. Phillies. Marlins. Cards. Yanks just have bad timing.

But Gary has to be the last straw. There's no "next man up" at catcher.

What's interesting is how loose or random the Covid protocol for MLB is and has been.

In Japan, everyone on the bench is masked. All umpires are masked. The players are only un-masked while they are on the field playing.

Gallo with his first Yankee tater! A big one!

Gallo really uncorked that one.

(15) Right on Hank. And encouraging people to get vaccinated is just Science, not politics.

Britton is a shell of his former self.

Win or Lose... I hate Chapman as our closer.

On second thought, don't do that unless you like nightmares.

Don’t look now, but the Yanks are a season-best ten games over .500 — never would’ve guessed it a month ago.

I was into the suck all year and have now missed 99% of the fun since the trades. Oi!

Here’s a stat to make you feel better about any struggles the Yankees’ pitchers might have:
The St. Louis Cardinals have walked 26 batters with the bases loaded this season.

(34) That seems impossible..?
Back from walking the dog, it’s 90F degrees here with 73% humidity., at 9:30AM..surely humans not meant to live in this weather?!
Couch and second half the game await!

I think the Yankees MVP this year, whatever happens, has to be Loaisiga. What a stud.

Time to plate some runs!

Whelp. Same as it ever was.

WTF, Stanton! Guy walks the bases loaded and you can't take a couple of pitches. GRRRRrrrrr.

(37) That’s a bit much!
Does Stanton ever actually have good ABs outside his home runs?

It's hard to gauge Stanton. He seems to produce throughout the year, but these big failures seem to jump out.

My problem is that I have zero faith in Stanton in any situation that matters. That double play there was no surprise at all. Sigh.

The Yankees could run out of pitchers.

Great AB for Gardy ruined by swinging at ball four. On to the ghost runner innings.

I think I am in the minority. I really like the runner on second in extra innings.

Mild redemption for Stanton. I’ll give him that.

As for the ghost runner, it would bother me less if they started it in the twelfth inning or so. It’s exciting I guess, but it would also be exciting if they moved the fences in a hundred feet for extra innings. But it’s not baseball.

I'm down with the ghost runner. This extra inning game is killing me.

Gardy! I think my favorite part of that is he showed his age — he didn’t jump around to much, he was just glad it was over and glad to have done his job. Big win for the Yanks.

I like when Katie Sharp drops positive Yankee facts. Here’s a good one:

Yankees in games decided by 1 or 2 runs this season:

The ol' husband and wife play (lack of communication).

Rizzo has covid too? Jesus christ. It's like nobody takes anything seriously.

It’s simply amazing that a billion-dollar business is willing to put itself in jeopardy by allowing its employees to opt out of the vaccine.

NY Post
Rizzo in June said he had not received the vaccine because he was waiting on more data. Boone declined to say whether Rizzo has been jabbed.

It's very sad that America, with a ridiculous abundance of vaccines and unlimited opportunities for hassle-free jabs, is filled with idiots who shamelessly won't take advantage. While Japan, with a lemming-like population (see: mask compliance), which really would run off a cliff if it was the law, has so totally fucked it's vaccine rollout into a complicated, confounding mess, making compliance near impossible for many.

Don’t worry, Boat. I saw no politics there. Only common sense.

Anyone watching the game? Satchel Paige’s daughter is that young?? Super cool she threw out the first pitch.

Out at home. Just wonderful.

Excuuuuuuuuse me check swing 2 out hit with risp. Rejoice.

anyone else a bit annoyed when YES has ryan rucco doing the commentary? a bit too enthused with everything and definitely a yankees stooge.

also, cool that velazquez is from the bronx

I'll take tonight's booth over Kay any day and twice on Sundays. : )

I like Rucco, he’s a nice change of pace.
This runner on second thing remains complete nonsense though..awful.

Anyone know what happened to Cone? Seems like ages since he's done a game.

Wait, is that Cone on tonight. Doh!
Nevermind, I haven't been paying attention.

I am blaming it on the 100 degree heat in Tokyo today. Yes, you read that right.

This is so ridiculous.

This bullpen is garbage. Basically a who's who of DFA level talent.

As crazy as this game has been, I still don’t feel comfortable.

Why am I still up?

And that ball was *almost* over Odor’s head. Just when I was ready for another devastating loss. But at this point in the season, a win is a win is a win.

4 blow saves and a win. How many times has that happen?

I really like KC's stadium, has such a warm feel to it.
Let's hope Cortes can settle down now..

Sometimes you have to just stand back and admire how bad of a lineup and pitching staff this team can put out there on a given night. I've been watching this team since 1981 and I don't think I've ever seen a team started with 6 hitters with a .233 or lower average, nevermind the clearance rack pitchers we routinely trot out to the mound. The fact that they have a winning record is really astounding. Perhaps Boone is a miracle worker.

Well, you have to take into consideration the people who aren’t available. Look at this lineup culled from people on the IL:

Really a shame it’s Andrew Heaney with this marquee start.

Jimenez scares me more than Abreu. I guessed he would have a big hit today.

Hank, those pitchers yes but that lineup is a .230 hitting team just like the guys heathly.

Oh and maybe we should have gotten a starter before the deadline. I don't understand how Cashman can be creative to get Rizzo and Gallo to appease the penny pinching owner but not a starter and reliever which we desperately needed. Just look at the ERAS of the guys we are trotting out there on a regular bases. There is just so much you can squeeze out of an empty tank, as Boone has been doing (ex that 9 pitcher win the other day).

I never felt comfortable. But when you’ve got the #9 hitter down 0-2 with one out, things look good. And then you walk him. That’s the story.

What happened to Britton? Is he done now?

That was an exciting 9th. I guessed the Yankees bullpen would blow it based on the last week.

This entire season is for anyone who ever took Mariano Rivera for granted.