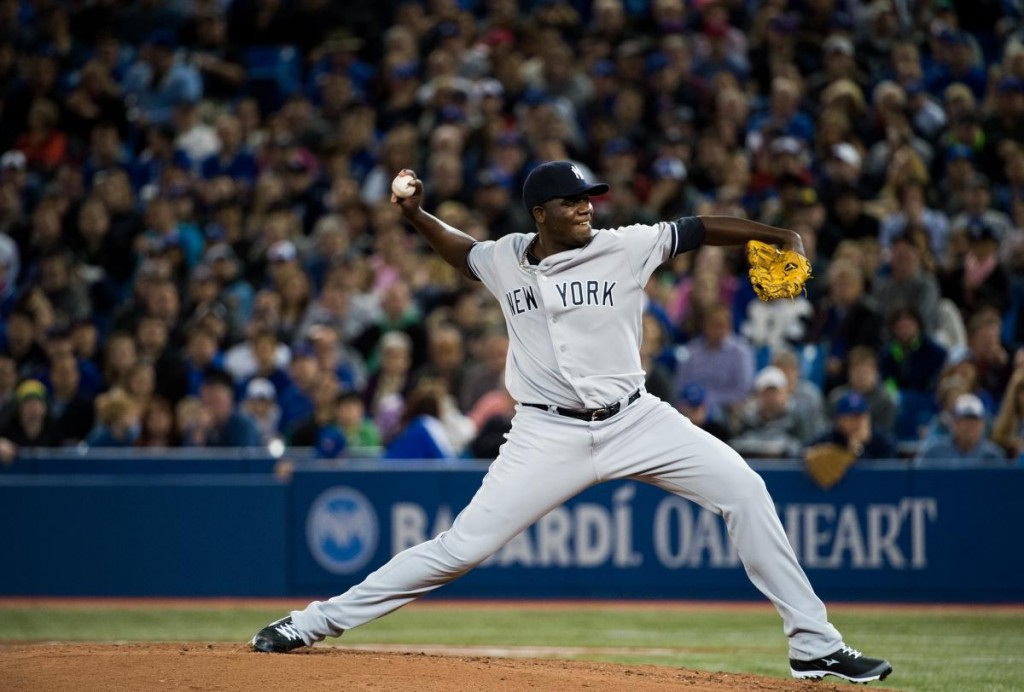 I’m not convinced the kid will stay healthy but if he does the future is bright for Michael Pineda.

Dig this from Tony Blengino over at Fangraphs.

Cool GIF post on Mo’s cutter over at Fangraphs. 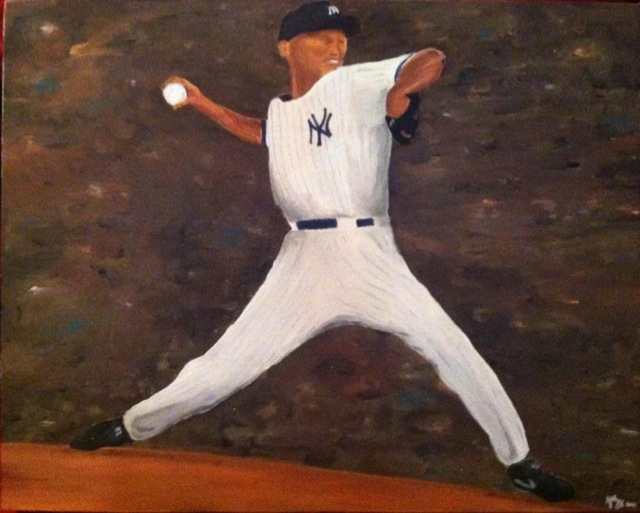 The Start of the End?

Over at Fangraphs, Mark Hulet looks at the waning Yankee dynasty:

Sabathia is a horse. The 31-year-old southpaw has pitched at least 230 innings for the past five seasons, and his highest FIP during that time was 3.54 (highest ERA was 3.37). He produced the second-highest strikeout rate (8.82 K/9) of his career in 2011 and posted his third seven-win season in the past five years. The issue with Sabathia, though, is that he can opt out of his contract this off-season and pursue a larger contract elsewhere. I find it hard to believe that he won’t be wearing pinstripes in 2012 but stranger things have happened and this remains a huge question mark that needs to be answered quickly, as it could shape the club’s entire off-season approach.

The organization has shed some young pitching talent over the past two years that it may have given up on a little too soon (Ian Kennedy, Tyler Clippard, Mark Melancon) but it wisely held onto David Robertson. Although pitchers such as Joba Chamberlain and Phil Hughes have had more hype, it could be Robertson, 26, who eventually replaces ‘Rivera The Robot’ in high-leverage situations with New York. The right-hander had one of the most dominating seasons by a reliever throughtout the Major Leagues in 2011. He posted a 1.84 FIP (1.08 ERA) in 66.2 innings and struck out batters at a rate of 13.50 K/9. He also improved his ground-ball rate almost seven percent to a career-high 46.3 GB%. One thing Robertson does need to work on is his control (4.73 BB/9). If he can continue to command his fastball-curveball combination like he did in ’11, the Yankees could have the best one-two punch in the late innings in the American League for the next few seasons.

There’s a nice interview with Ken Singleton over at Fangraphs today (David Laurila asks the questions):

DL: Was on-base percentage underrated in your era?

KS: Most definitely. I think that nowadays — with the attention paid to OBP and OPS — people would have seen me in a different light. That said, I was fortunate enough to play for Earl Weaver, who, maybe before his time, knew what on-base percentage meant.

My first year in Baltimore, there really weren’t a lot of guys stealing bases. He called me into his office in spring training. I thought that maybe I was in trouble, but what he wanted to tell me was that I was going to lead off. I told him that I wasn’t capable of stealing many bases, and he said, “That’s not the idea. The whole idea is that you walk a lot, and Bobby Grich walks a lot, so you’ll bat first and he’ll bat second.” I set the Orioles record for walks that season [118] and it still stands. Bobby Grich walked 107 times that season.

My first at bat in the American League came in Tiger Stadium on a cold day. I drew a walk. I went to third on a base hit and scored on a three-run home run [by Lee May]. I scored our first run of the season. When I got back to the dugout, Earl Weaver looked at me and said, “That’s what I was talking about. Get on base.”

If you read USS Mariner or FanGraphs, you undoubtedly know the name Dave Cameron.  Dave is one of the founders of the USS Mariner site, and is now the full-time managing editor and operator of the FanGraphs site.  Today he posted a very sobering entry:

Here on FanGraphs, we talk a lot about probability and likely outcomes. When making a decision, we think it’s generally wise to understand historical precedent, and to learn from history rather than repeat it.

But, there are times in life that you’re not making a decision, and knowledge of the probability of outcomes just doesn’t help at all. You are just rooting for one specific result, even if you don’t have any control over whether it occurs or not.

I’m now in one of those situations. Last week, I was informed that I have Acute Myeloid Leukemia, a particularly nasty member of the cancer family. History has given my doctors all kinds of data about cure rates and life expectancy, and statistical analysis is helping them decide just what kind of chemotherapy I’ll be taking in a few hours, which I’m really thankful for.

Cameron’s outlook seems positive, as evidenced later on in the entry:

We at the Banter wish Dave well … here’s to a swift and full recovery!

Doctoring Up the Chili

There is an appealing interview with Chili Davis over at Fangraphs:

Over at Fangraphs, Dave Cameron has a good post about Alex Rodriguez’s time with the Rangers:

The problem is that Rodriguez more than held up his end of the bargain, and if the Rangers front office had behaved with even moderate competency, they could have put some good teams together. The blame for the failure of the 2001 to 2003 Rangers does not lie with Alex Rodiguez’s large paychecks, but instead with the total wastes of cash that they surrounded him with. You want to know why those teams failed? Look no further than Park, Gonzalez, Everett, Oliver, and Rogers. In their attempt to surround Rodriguez with talent, they brought in a never ending series of terrible players who had name value but lacked ability. It didn’t have to be that way. They had enough resources to put good players around Rodriguez – they just failed to identify which players they should actually be giving money to.

Alex Rodriguez’s first contract was far from the worst deal in baseball history. In fact, given his performance in the years after he signed the deal, Rodriguez was actually worth the money he was paid. Unfortunately, the narrative of the deal lives on, despite all the illogical hula hoops you have to jump through in order to reach the conclusion that MacPhail suggested yesterday. Don’t believe the hype; A-Rod was not the cause of the Rangers failures, and the contract they signed him to was actually a wise investment. The problem is that was the only good investment that franchise made in those three years.

While you are there, check out Cameron’s take on the news that the Twins are open to trading Francisco Liriano:

Dealing Liriano to the Yankees is likely the big question that the Twins will have to answer. If they make Liriano available, you can be sure that Brian Cashman will pick up the phone. If the Twins see 2011 as something of a consolidation year, with World Series contention more of a hope than a legitimate reality, then you can justify sending your best pitcher to a league rival if you think you’re getting the better end of the deal long term. But if the Twins think that Justin Morneau is going to be 100 percent this year and they want to make another run at a championship while they have Jim Thome and the M&M boys in their primes, then they shouldn’t be in the business of strengthening teams they will need to beat in October.

I can see the reasoning behind considering dealing Liriano now, but it would likely require the Twins to admit that 2011 is probably not their year, and that’s a tough case to make to the rest of the team right as spring training opens up. If this was a path they wanted to pursue, it probably would have made more sense to be aggressive in dealing Liriano earlier in the winter, when they might have been able to ship him to Milwaukee or Chicago, getting quality prospects in return and getting him out of the American League. Now, faced with the choice of sending him to New York or taking an offer that is likely less impressive in return than what the Yankees would put on the table, the Twins are left with two less than palatable options. At this juncture, I think the Twins are probably best served hanging onto Liriano until the summer. By then, they may have more clarity about their own chances of making a splash in the playoffs, and there might also be an NL contender willing to get in on the bidding.