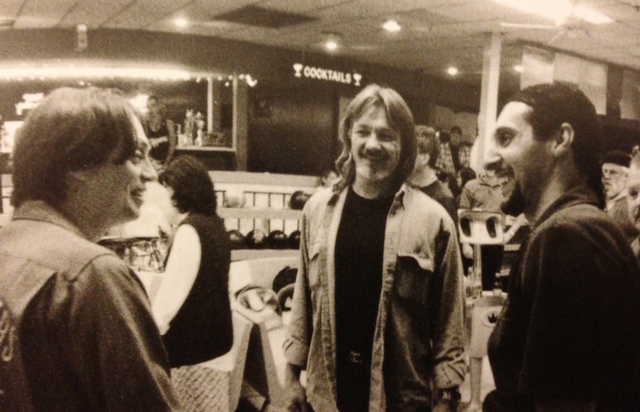 Nice group of Big Lebowski links over at the consistently rewarding movie site, Cinephilia and Beyond. Includes this picture of Steve Buscemi and John Turturro taken by Jeff Bridges (the guy in the middle is Bridges’ longtime stand-in). Ah, my Zelig moment. You’ll see in the background right near Buscemi’s head, a blurry figure wearing a Clippers jersey. That would be me.

There’s an assumption that the Yankees will use prospect Jesus Montero to acquire someone to fill the Lee-sized hole they see at the front of the rotation. They traded Montero once, remember, agreeing to a deal with Seattle for Lee himself back in July before the Mariners decided to trade him to the Rangers instead. The idea that the Yankees will use Montero, who compares to Mike Piazza both offensively and defensively, to get Zack Greinke has been in play for some time, but it’s not a particularly good fit. Greinke is a very good pitcher, but he’s signed through just 2012. If the Yankees are determined to trade Montero, who is one of the top five prospects in baseball, they should target less-obvious candidates who can contribute for more than 70 starts — even if it seems like these pitchers will, or should, be untouchable.