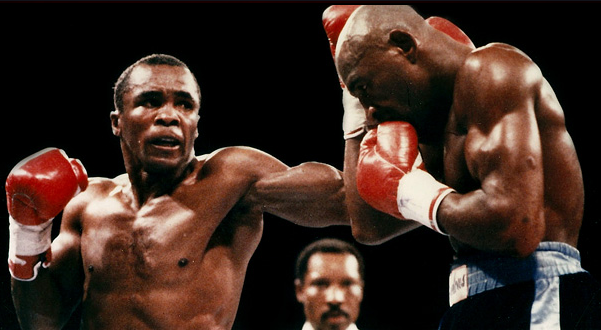 For years, Richard Hoffer was a stud at Sports Illustrated (where he still contributes the occasional essay), and before that,  he worked for the L.A. Times.  He  is a master stylist and writes lean, elegant prose–precise and wry. He is funny, though never showy. Combined with skillful reporting and sharp observations (his book on Mike Tyson is a must for any boxing fan) that is enough to make him one of our best.

Written on deadline, it is reprinted here with the author’s permission. 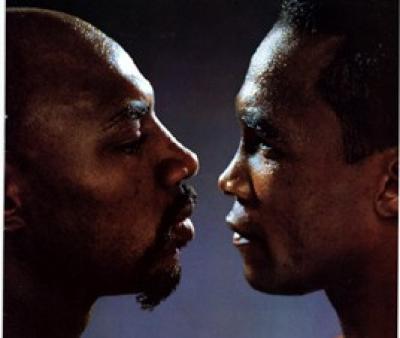 Sugar Ray Leonard’s enormous bravado, which was nearly offensive in the pre-fight buildup, became a promise fulfilled Monday night when, after what was essentially a five-year layoff, he returned and upset boxing’s dominant champion, Marvelous Marvin Hagler. The sheer audacity of what he attempted was somehow matched by the strategic elegance with which he did it.

The comeback, culminated before the largest world audience to ever see a bout, had been judged foolhardy by most. The symmetry of their careers, their destinies so intertwined, somehow forgave the circumstances of the obvious mismatch. They deserved each other five years ago, but this was better than never.

Still, only those who believed in time travel gave Leonard any chance against Hagler. Leonard would have to return five years, to a time when hands were fast and legs tireless, to meet the foreboding Hagler on anything near equal terms. 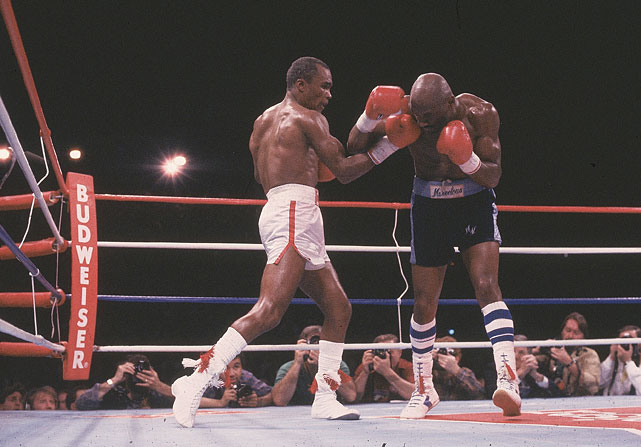 Well, he wasn’t the welterweight of 1982, when he first retired after eye surgery. But there was more about Leonard than his tasseled shoes that recalled his time of greatness. For 12 tactically brilliant rounds, he circled and countered, confusing and confounding the bewildered middleweight champion, until he had secured a split decision.

Though the judges did not entirely agree on what they saw—Lou Fillippo had it 115-113 for Hagler, Dave Moretti 115-113 for Leonard, and JoJo Guerra 118-110 for Leonard—the only person near the ring in the parking lot at Caesars Palace to voice any genuine surprise at the decision was Hagler himself. “I beat him and you know it,” he said immediately afterward. “I stayed aggressive. C’mon. I won the fight.”

But Leonard’s game plan never let Hagler in the fight. He circled outside, daring Hagler to stalk him, occasionally entangling the champion in a brisk flurry. Hagler missed monumentally as he chased Leonard. Although neither was hurt or in any danger of going down, it was clear that Leonard was hitting more than Hagler and gaining angles on a man not particularly known for his balance.

“Hit and run, stick and move, taunt and intimidate,” explained Leonard, facing the press in a jaunty yachtsman’s cap afterward, “a variety of things.” 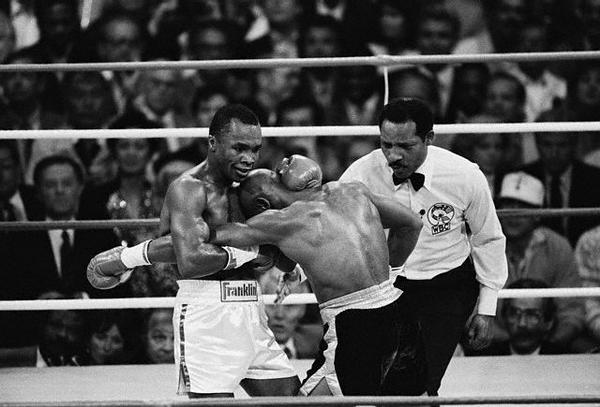 It was not always pretty and may have disappointed the nearly 300 million people watching, in that it lacked boxing’s concussive conclusion. But it was not ugly, as even Leonard’s attorney, Mike Trainer, had predicted when the comeback was announced a year ago.

Richard Steele, the referee, said: “Maybe he fought him the only style he could win with.”

Leonard, of course, knew better than to lead Hagler into any kind of brawl. Hagler (62-3-2, 52 KO) had leveled Thomas Hearns, the last fighter to try that, in just three rounds. In fact, he did fight Hagler the only possible way.

And he fought him that way the entire night. Leonard (34-1, 24 KOs) danced outside from the first round. The clinching was plentiful. And at times, Leonard leaned back into the ropes, imitating the last great popular champion, Muhammad Ali. It was obviously frustrating for Hagler. His long looping rights missed by feet, it seemed. Once he threw a punch, followed it into a ring post, while Leonard bobbed and returned to the center of the ring. 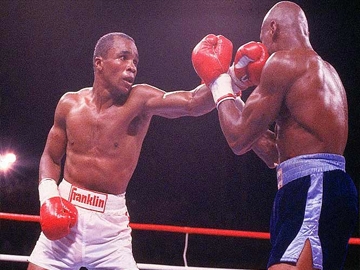 Leonard gave him head feints, his hands dropped, offering his chin disdainfully. Once, in the seventh round, Hagler threw three large right hands in a row. They sailed wide, tremendous arcs in the desert air.

Leonard was masterful in his attempt to frustrate Hagler. In the fourth round, Leonard mocked his opponent with a bolo punch to the stomach.

Hagler, of course, would not be unnerved in the way that Roberto Duran was, when Leonard frustrated him into submission. Still, he was mad, and the two often crossed stares at the bell, and several times had to be escorted to their corners. Hagler was often exhorting his long-time nemesis, “C’mon, c’mon, c’mon,” he kept repeating. 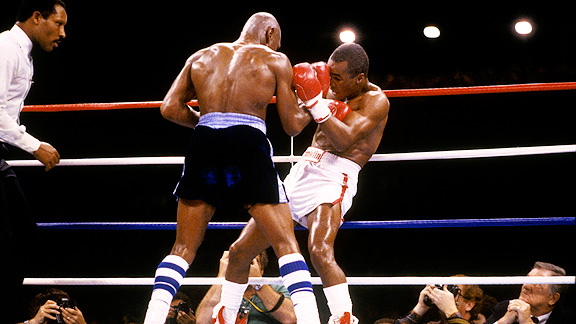 “Once,” said Leonard, shrugging his shoulders, “he called me a sissy.”

In the later rounds, when Leonard was obviously and desperately tired, Hagler began to close the distance between the fighters. In the ninth round, Leonard appeared in trouble in his own corner, but he battled out of it with a vicious fury. At times, he seemed to die against the ropes. Or was he inviting Hagler in for that staccato counter-punching?

In that ninth round, the best of the fight, Leonard four times ensnarled Hagler in some reckless flurries. 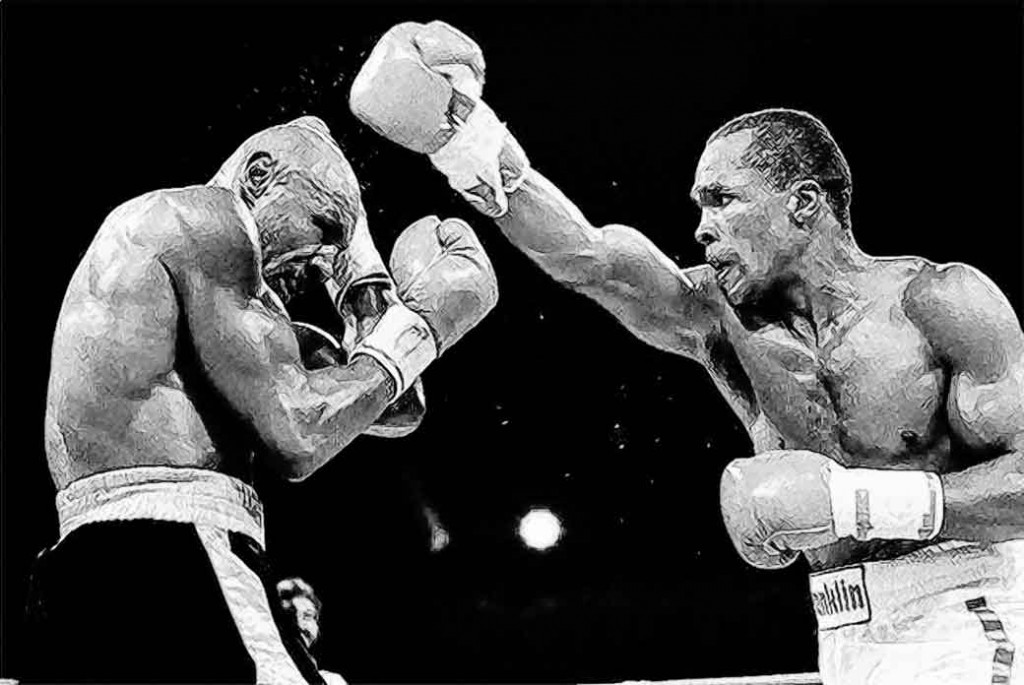 It was dangerous and, considering the scoring up to that point, unnecessary. In the 11th round, Leonard got cute. He got up on his toes, smirked as he circled the champion, and threatened yet another bolo punch.

In the 12th and final round, with Hagler continuing to miss, Leonard mocked him by raising his right glove, apparently in anticipation of victory.

Inasmuch as this fight is expected to pull in more than $60 million, a record gross, there will undoubtedly be some who felt they didn’t get their money’s worth. Yet Leonard, who received a flat guarantee of $11 million to Hagler’s $12 million (plus a percentage of the gross), certainly made an effort to earn his.

For, he won with as much grit as wit. At the fight’s end, he collapsed into the arms of his handlers. Those legs, suspect going into the fight, hadn’t failed him until then.

Leonard, 30, had fought just 32 rounds in six years but his year of conditioning apparently dissolved the ring rust that so affects boxers. Of the unlikeliness of his achievement, Leonard said: “It’s the first time a young guy came back against an old guy.” Previous examples of failure do not apply. 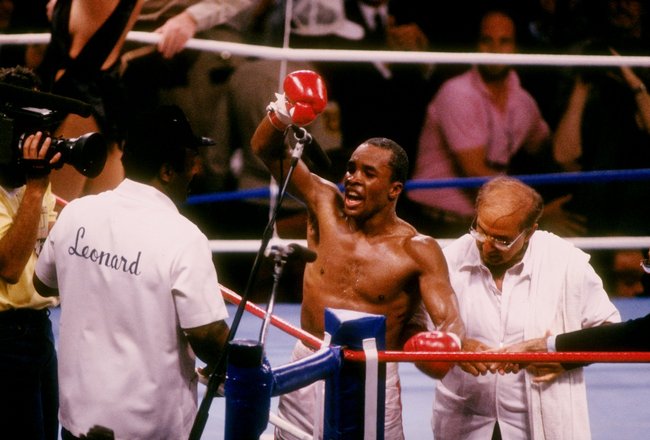 Hagler, 32, was obviously disappointed, and he referred very quickly to the trouble he has with judges in Las Vegas. He lost his first title bid on a controversial draw with Vito Antuofermo here. But he admitted that Leonard, who he had pursued for years, fought a “courageous fight.” He could pursue him, but it doesn’t look like he’ll ever catch him.

Hagler, who was stopped short of his 13th title defense in the sixth and final year of his reign, must now hope for a rematch. Leonard will not likely be quick to oblige, if at all. In the ring he said, laughing, “depends on the contract.” But later, he refused to guess one way or the other as to what he’d do.

The decision certainly creates some interesting matchups, and it will be fun to speculate on the combinations. Hearns, who has lost to both, will want in on the action. Permutations abound. If Hagler and Leonard remain true to their peculiar destinies, they are likely to chase each other around for years more, until finally, they really are too old for this kind of thing.