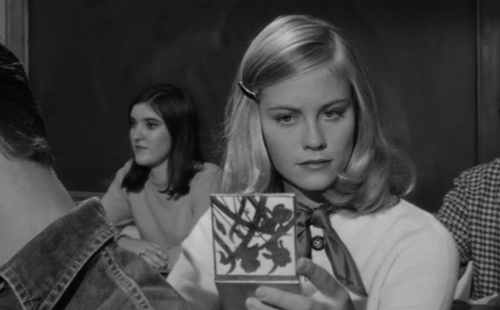 Many elements of “The Old Dark House” come courtesy of the Brits: the original novel by J.B. Priestley, director James Whale, and a good chunk of the cast including top-billed Boris Karloff (born William Henry Pratt) and Charles Laughton. Yet, the very idea of an old dark house has deep resonance in America’s very DNA, more than the idea of the “haunted house,” which goes back in time as long as there has been a tradition of literature and found its first modern expression in Horace Walpole’s 1764 novella The Castle of Otranto.

The American version, the one that belongs to us, arrived with Edgar Allan Poe’s 1845 “The Fall of the House of Usher,” which is not a ghost story but, with its themes of corruption, decay, insanity, and incest, embodies a more primal American fear than the angry dead, one built for the wide-open spaces of an entire continent, that if you knock on any door down one of our isolated country roads you will discover that the people living behind it have been left alone for so long that they have become perverse and dangerous. Every quaint farmhouse harbors a family of demented maniacs who want to fuck you and put you in the soup, as does every shotgun shack and even Hamptons mansion, although motivations and order of operations may vary. Europeans fear ghosts, Americans fear the living.

That’s largely the situation in “The Old Dark House,” which contains the blueprint for every “the car died on a cold and rainy night and there is nowhere to seek shelter except that place up the road” story that followed, including “The Rocky Horror Picture Show.” “The Old Dark House” is basically “Rocky Horror” without the stockings and the songs, although Whale’s movie is funnier in that the picture winks at its grotesques rather than simply parodying them. When Rebecca Femm (Eva Moore) the puritanistic, sex-obsessed crone who makes up one half of the inevitable brother-sister pair that lives in the house, compulsively repeats that her unexpected guests can stay but, “No beds! You can’t have beds!” her single-mindedness is laughable, but also frightening in that you wonder what her fixations portend—no one denies sex so insistently if they’re not harboring kinks too disturbing to be faced.

Let’s backtrack: Raymond Massey, Gloria Stuart, and their dissolute pal Melvyn Douglas are tooling around the rain-darkened countryside when the road gets washed out. Whaddya know, there’s a light on at the Femm place. They are greeted at the door by a servant, Morgan, a shuffling, drunken mute played in heavy makeup by Boris Karloff. Karloff was coming off of his great success in “Frankenstein,” and the makers of the film really want you to know that yes, that is him playing Morgan—before the credits roll, even before the Universal Studios card appears, there is a note from the producers saying, yes, damn it, that’s Karloff. Trust us. “We explain this to settle all disputes in advance, even though such disputes are a tribute to his great versatility.”

The Massey-Stuart-Douglas trio is soon joined by two other wayward travelers, an unrepentant capitalist played by Charles Laughton in an early American role, and his flighty mistress, portrayed by Lillian Bond. There are some soap opera-ish interactions among these characters and a “Lost Generation” characterization for Douglas (the actual point of the Priestley novel, rather than horror), but like the songs in Metro-era Marx Brothers movies, these are just annoying changes of pace—the real interest of the film is in the Femm siblings and the other family members they’ve got stashed away upstairs, including an ancient pater familias so old that he had to be portrayed by a woman credited as a man (actually the wonderfully-named Elspeth Dudgeon) and the ominous Saul, who is locked in the attic.

Director Whale, the subject of “Gods and Monsters,” leavened his scare flicks with a bit of ironic detachment, puncturing frightening moments with jejune actions that are somehow still disturbing. There is a moment in “House” when the various guests are sitting down to dinner with the Femms, and the atmosphere is so heightened that when brother Horace Femm says, “Have a potato,” it is momentarily frightening, then quickly comic, because, damn it, it’s a potato.

The dinner scene is a good example of the way the film expertly veers in tone. Horace and Rebecca are played for laughs in that scene, with Horace’s pushing of the potatoes and Rebecca loading her plate with vinegared onion after vinegared onion, but it is preceded by a scene between the attractive young Stuart and Eva Moore that begins with Rebecca’s comic eccentricity—“It’s a dreadful night. I’m a little deaf. No beds!”—and then quickly becomes serious as it shows how the obsessive fear of sin can become sinful. The drenched Stuart needs to change her clothes, and Moore takes her to an isolated bedroom dominated by a cracked mirror.

“My sister Rachel had this room once,” Moore says, “She died when she was 21. She was a wicked one, handsome and wild as a hawk. All the young men used to follow her about, with her red lips and her big eyes and her white neck. But that didn’t save her… On this bed she lay, month after month. Many is the time I sat here listening to her screaming. She used to cry out to me to kill her, but I’d tell her to turn to the Lord. But she didn’t. She was godless to the last.”

Stuart changes into a sleek gown, because if you have Stewart ’32 in your film (as opposed to the aged version James Cameron had portraying the elderly Kate Winslet in “Titanic”) you show her off a bit. Moore notices her 21-year-old body. “You’re wicked, too… You think of nothing but your long, straight legs and your white body and how to please your man. You revel in the joys of fleshly love, don’t you?” As Stuart pulls on her gown, Rebecca grabs the hem and says, “This is fine stuff, but it will rot!” Then, pointing at Stuart’s chest, “That’s finer stuff still, but it will rot, too, in time!” Then Stuart looks into the mirror, and sees that it is true.

In many ways, “The Old Dark House” is just a play, with a few darkened sets and a lot of talking, but it’s an effective one. The cast is very good. Laughton would go on to have a long, Hall of Fame career, and it’s foreshadowed in his smallish part here. If Massey is remembered today, it’s probably for the 1960s medical series “Doctor Kildare,” in which he supported Richard Chamberlain, but he had a gift for playing messianic figures, notably in two Civil War pictures he made in 1940, Robert Sherwood’s “Abe Lincoln in Illinois,” in which he took the title role, and “The Santa Fe Trail,” in which he plays John Brown against Errol Flynn’s Jeb Stuart and Ronald Reagan’s George Custer. Yes, that Ronald Reagan, yes, that George Custer.
Karloff doesn’t have a lot to do, but as an actor he was a lot more than a man in makeup. Douglas would have a long career, winning two Academy Awards (though not until roughly 30 and 50 years after “House” was made).

In the end, a few things that shouldn’t come creeping down the stairs and there’s a desperate struggle, but no Usher-like fall happens to the House of Femm. The picture ends with Horace beaming as his guests depart. “It’s a pleasure to have met you,” he smiles. A night of madness is just a bit of diversion for the Femms, and you get the sense that they’ll quickly get to work straightening up the place so it can all happen again the next time it rains.

Subsequent iterations of freaks-in-an-old-house (as opposed to “haunted house”) template, including a risible 1963 remake directed by William “The Tingler” Castle, have upped the level of violence, fear, and insanity far beyond anything in the house that Whale provides here, but I prefer the Femms because they’re knowable. There is nothing supernatural at work here, just some loosely-alluded to debauchery in the distant past and a moralizing streak that wouldn’t stand out in some quarters of the Republican Party.

That’s why I like “The Old Dark House.” It’s planted squarely on our soil, haunted only by a little sex and a little violence and the knowledge that if there’s a light on at the place up the road, it’s probably because someone needed to illuminate something dirty. It’s that animating Puritan spirit of paranoia that Hawthorne wrote about so brilliantly in stories like “Young Goodman Brown.” Whale’s “House” is the rare film that has fun while exploring this concept, the knowledge that, as Sartre wrote, hell is other people—or in the American case, the other people just up the road.