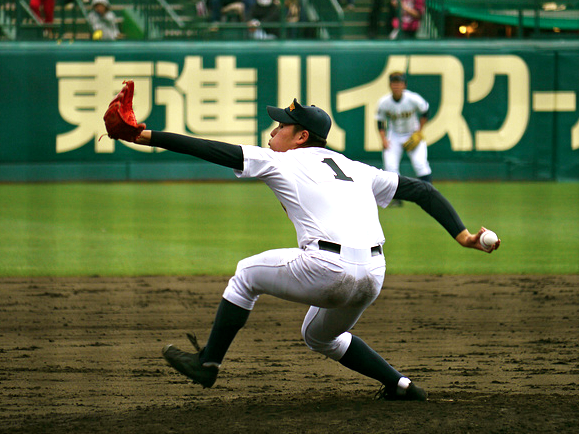 Chris Jones delivers a good one for ESPN the Magazine:

Tomohiro Anraku’s last moments of invisibility. Outside Japan, at least, he has been that ultra-rarity — the unseen sensation, a real-life Sidd Finch, his story so impossible that he’s been spoken about only in whispers or exclamations.

He is out there somewhere on this all-dirt field; he is one of these few dozen possible boys. But on this overcast Saturday morning in June, before the start of the first of two exhibition games in Akashi City, the greatest teenage pitcher in Japan — the best since Yu Darvish — and one of the top 16-year-old prospects in the world — as can’t miss as Stephen Strasburg — continues hiding in plain sight. Saibi High School isn’t wearing numbers on its white uniforms today. These boys never wear names. And from a distance, as they practice their drills with alarming precision, looking less like ballplayers and more like a marching band, like toy soldiers, any single one of them disappears into the lockstep crowd. An arm like Anraku’s, this inhuman appendage, must look different. It must have scales, or talons, or somehow drag across the earth, leaving fissures in its wake. But for now his arm is just another arm, and Anraku is just another player, his otherworldliness lost in this army of Japanese ordinary.

Masanori Joko, Saibi’s 66-year-old manager, stands like a general on a hill overlooking the field. “Is Anraku the one with the shaved head?” someone asks him, and he smiles. “They all have shaved heads,” he says through an interpreter, before he offers his only description: “He is the tallest one.”

There he is. That must be him. He is the tallest one by several inches, more than six feet tall, with a cap perched high on his head and a red glove on his left hand. His back is so broad, his shirt — the only one its size on this entire team — rides up his long arms. He has thick legs and a surprisingly American ass, and when his feet dig into the dirt, he ripples like a sprinter. He runs with another, much smaller boy into rightfield, the pair lost in the same cloud of dust, where they wait for a coach to hit a ball their way. When a pop fly settles into Anraku’s glove, his arm is put on display for the first time: He throws a one-hopper to the plate. A murmur rolls through the crowd. This is a good sign.