The Joys of Jeter

Jeter, from day one, became the Yankees’ “Everyman”–everybody’s son, everybody’s brother, everybody’s dream boyfriend. Without even trying, he tapped into every chord of the Yankee mythos like no player since Mantle. He would add a few unmistakable new notes of his own, heralding in a new age for the franchise. Jeter had it all, and from his first day he became the best shortstop in club history. The Yankees couldn’t have invented him had they tried.

When we talk about Derek Jeter we talk about class and dignity and tradition.  Those buzz words that sound cliche. We talk about how he is overrated, but maybe underrated too. About how cool and calm he is, how calculatedly dull but dutiful he is with the press. But what I’ll always remember about Jeter is how much fun he has playing baseball. It is his defining quality for me and one that is virtually ignored in the sea of commentary about Jeter.

Have you ever seen him in a big game not smiling and generally enjoying the s*** out of himself? It is as if he’s impervious to the nerves of the moment. 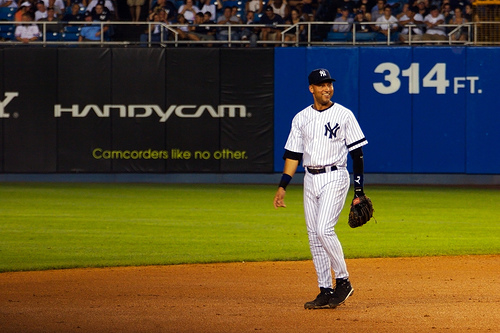 Baseball has a name for the player who, in the eyes of his peers, is well attuned to the demands of his discipline; he is called “a gamer.” The gamer does not drool, or pant, before the cry of “Play ball.” Quite the opposite. He is the player, like George Brett or Pete Rose, who is neither too intense, nor too lax, neither lulled into carelessness in a dull August doubleheader nor wired too tight in an October playoff game. The gamer may scream and curse when his mates show the first hints of laziness, but he makes jokes and laughs naturally in the seventh game of the Series.

Jeter is a man defined and consumed by his work, an ideal we’d all love to have ourselves but only few share. It’s part of what draws us to him. But Jeter reminds us that work can be play too. Who wouldn’t like to think of themselves handling themselves like Jeter in tough situations?

Pete Rose may have enjoyed himself as much as Jeter but not more.  And it wasn’t easy to share those feelings with Rose. Perhaps the best thing you can say about Jeter is that he’s competitive and has class and dates gorgeous women and he’s not Pete Rose.  Jeter does not let us get too close–we don’t know him away from the field–but the beauty part is that he lets us see all we need to know of him on the field.

The play is the thing, after all.

In an e-mail, Stout added:

I’ve always thought that with Jeter it’s actually really, really simple. You know when he was a little, little boy, he decided he wanted to play shortstop for the Yankees – that’s all he ever wanted, and for as long as he can remember that’s all he has ever imagined doing. He’s about the only person on the planet who has never had to scale down his dream, and since he has imagined himself doing what he is doing his entire life, it feels completely normal, the most natural thing in the world – on the field he is completely at home with himself, completely relaxed and happy. Why not smile?

And that’s why he was there to make the tag on Gomez, and the flip to Posada to get Giambi out way back when, and the home runs he hits right after the other team scores and all those other plays he makes – he’s been living these moments in his head his whole life, from the days he laid on his bed and tossed the ball up toward the ceiling. It’s not natural, but it is natural to him – he’s been playing shortstop for more than thirty years.

And what about the Nick Punto play last night? Stout continues:

I loved the Jeter just calmly explained that he saw Punto out of the corner of his eye then waited for him to commit and made sure he threw a ball to Jorge that he could handle, ho hum, on the fly, instant decision that all took place in about 1/2 a second. He’s like the guy that has learned to solve the Rubik’s cube.

It’s the smirk, the enjoying the moment, that I’ll always remember about Jeter. Not every great player allows you to see them having fun–heck even Mariano doesn’t exude that same vibe. But with Jeter you know he’s loving it. And he loves it when his teammates do well. Did you catch the little kid enthusiasm from Jeter after Alex Rodriguez hit that dinger off of Joe Nathan on Friday night? 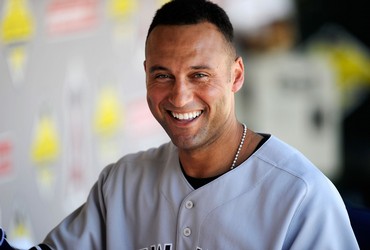 After the game last night, Mariano Rivera talked about Rodriguez to reporters. “He’s feeling great and he trusts himself,” said Rivera. “He’s having fun, having fun, having fun and that’s the most important thing. Before, he was trying so hard and you can’t have fun like that. Now, he’s just enjoying it.”

For the last few years, I've felt like the father in the proverb of the prodigal son. Because of how poorly Arod had been treated by so many, often because of stupid things he had done, I kind of pushed Jeter aside to offer full support to Arod. But, now that Arod seems to have returned to normalcy, it's nice to sit back and appreciate Jeter.

"Have you ever seen him in a big game not smiling and generally enjoying the s*** out of himself?"

only once: game 7 of the 2004 alcs. i think he drove in the yankees' first run to make it 6-1, and he looked angry as he implored his teammates on the bench to get it together and not give up.

by the way, another big blown call last night in the phils rockies game- foul ball hit off utley and rolled fair, called fair and turned into an infield single.

This team is playing really well. I hope it continues. Jeter is the leader but it really does feel like a team for the first time in a a long time, perhaps since 2001. That's the last time it felt like everyone was on the same page like this.

it feels great to me that both jeter and arod had a great series and hopefully continue to have a great post season.
one of the most draining things for me the last 5 year has been the jeter/arod dichotomy that has caused these competing camps who insist on tearing one of them down to propel the other.
they are obviously quite different people and players, and i thin there is plenty of space to appreciate them both for what they are.
i think it is fitting that both of their strength were on such a wonderful display in this series.

there is another cliche - that the game slows down for some players - i of course never played on the level derek has played, but i know what this means and was fortunate enough to experience it when i played. the truth is not that many players would have made the play derek made on punto last night, and while many jeter "haters" will find a way to crap on it, it was a great play that embodied jeter perfectly. as stout said it was completely natural. you could see him smiling as he spun around and saw that punto fucked up - he saw the play unfold before it happened, he knew it was huge to be able to get that out, and help preserve the win, and he was smiling the whole time.

I get the same impression from Jeter, that the central trait is his enthusiasm for the game. However it doesn't strike me as enjoyment per se, though there is that. It's like a dog chasing a ball - there's enjoyment but also compulsion, a sort of satisfaction at having a natural instinct fulfilled. For whatever reason, Jeter is just really, really in his element playing a baseball game. Maybe it's more apt to say, instead of that he enjoys playing, that he loves it. It just seems like true love for him out there.

When Jeter flagged down that bouncer up the middle, my first thought was that he wouldn't have gotten to it a couple of years ago. My second thought was that he looked so incredibly alert as he switched the ball to his throwing hand; even so, I didn't think for a second there was an out to be had on the field right then.

The other moment that I loved seeing in that game was Rivera sawing off Mauer's bat in the 9th. Mauer's been hitting great pitch after great pitch all year long, but that cutter--good god.

[0] Amen. All wonderful stuff. One minor quibble about Stout. I hope he means Jeter threw a nice one hopper to Posada when he says "on the fly." What was he going to do? Roll it to Posada? : )
[3] Utley was the winning run, correct? boooooo
Alex said in the postgame that there are a bunch of guys who have been here before, and those that haven't can watch them and learn. He spoke about Derek being the Captain and following his example. And he sounded like he meant it. Whoo-hoo. Bring on the Scoscia Angels of Choad County.

[9] no, rollins (who moved to 3rd on the utley play then scored on a howard sac fly) was the winning run

Wondering what to watch tonight .... how about Emma on Jeopardy?
http://www.jeopardy.com/showguide/thisweek/

[11] no offense to emma - but no yankee game til friday is not cool - i guess it is good for a somewhat older team to get rest, but friday?

Note to Just Fair: When I wrote "on the fly" I was referingg to the decision, all made "on the fly," not the throw.

[13] Gotcha. I enjoyed the piece. I've written before, Jeter is my age and he is living my boyhood dream. He's been my favorite since day 1. When he retires, I will officially be old. : (