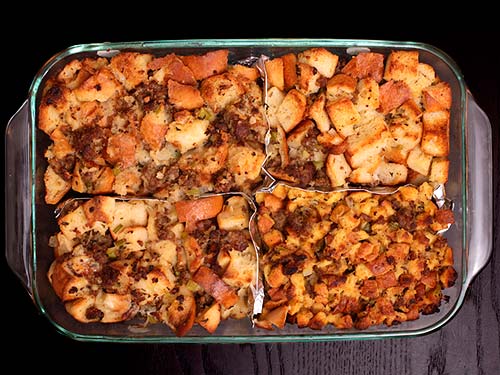 Serious Eats serves it up (better) than Stove Top Stuffin’.

Oh, this is a tough one.
Okay, I predict that thelarmis does *not* eat stuffing, and that Chyll Will *does*.

For Thanksgiving dinner to be complete I need a serving of turkey, stuffing, and some kind of potato (preferably mashed) all covered in gravy.

There can and should be tons of other stuff, but that stuff is interchangeable and non-mandatory. And in a lot of years, I even prefer the "other stuff" to the required items, but it's not Thanksgiving without the big 3 plus gravy.

I've never had the sweet potato/yam thing with marshmallows but that sounds like fun.

I don't care for traditional Thanksgiving food--turkey, etc. I don't dislike it, I'll eat it, but it does nothing for me. The sweet stuff after dinner, though, I can roll with that.

[1],[2],[3] Ohhh, this had me giggling like Weeping! Okay, let's play that game; who likes/dislikes what and why? Whaddaya say, thelarmis? Answer after 10 guesses?

Root vegetables!! Plus, my sister-in-law makes the grandmommy's stuffing - lots of sausage and ricotta - sooooo good.

[3] i'm with you jon - those 3 things are what makes it thanksgiving.
my mr. oct. wants me to make arroz con gandules which i will but only in addition to the stuffing and mashed potatoes.

i'm guessing thelarmis does not eat stuffing - a texture issue.
will is more difficult. i'm going to say yes though.
i think riyank got it.

[3] [7] Me too, those are the non-negotiables.
I need a couple of dark green items -- I'd go for Brussels sprouts, broccoli, green peas, some leafy thing, etc. And I can do without the sweet orange roots, personally, but they do look nice. Cranberry sauce, ok if home made. Pies, of course! Preferably pecan, but apple is good too. (Not pumpkin, even though again it does look good.)

8) I'm in charge of bringing b sprouts to Turkey dinner. Think I'll just have to bacon that shit up, huh?

[9] Yeah, those are so good. Like in Mark Bittman's video, right? But simple is good, too. (I do think saute rather than steam is important.)

[9] Great minds think alike. I just bought b sprouts from the farm and applewood smoked bacon from Trader Joes. I am stoked!

Hate yams w/marshmallows. Will not touch.

I agree with Jon; turkey (wing), stuffing, and mashed potatoes are key. The rest is gravy, no pun intended. My brother generally fires up lamb on the grill. Doesn't suck.

I like this holiday even if my pc son thinks it's despicable. It is. Oh well.

Oh, and no pumpkin pie for me either. Sweet potato, no. Any other. Apple works. Anything chocolate.

Folks, I have a sneaking suspicion that thelarmis does like stuffing; it is mostly bread after all, and he's said over and over that he loves bread. It's really a matter of what you put in the bread; so he probably has a recipe all his own he's happy with.

Me, I do eat stuffing (score one for RI and Ms. Oct); but I am still very picky about what's in it. I don't care for many of the stuffing recipes out there, and Stove Top is a stop-gap solution in all senses of the phrase (I do like some Stove Top, but wouldn't go out of my way for it). Like most things in the normal world, it took me a long time to appreciate stuffing as a side dish and not a plate dressing. My Mom had a great recipe that I have not been able to duplicate yet, but I know the ingredients included 1-3 day old bread (aged in the crisper, of course), tiny-diced green and red peppers, onions and some rice, along with seasoned chopped turkey gizzards (the ones that come wrapped inside the bird); seasonings I don't know, but one can experiment. All of this is mixed together in a cast-iron skillet with butter and turkey stock/broth, browned/cooked for about 10-20 minutes, then packed into the turkey before cooking. When it's done, it will be crusted brown on the outside and thick and moist on the inside from the turkey juices seeping into it as it cooks.

I think I tried hers by mistake in my early teens and realized my bigger mistake, and I've been afraid to make it since my Mom passed. Some things are inexplicably sacred to me; her stuffing is one of them.

NO CRANBERRY SAUCE!!! Too bitter.

I'm an either/or concerning rice or mashed potatoes. Love both, but can't have both at the same time.

Will, you are trying to deduce logically what foods thelarmis likes. This is a mistake. I think the only way is to try to feel the vibe, and when I channel percussion the vibe I get is that it's sticky and gross and spent waaaaaay too long inside a bird.
Whereas you tend to be happy with what I think of as comfort food.

If you ever try making it again and you're missing some je ne sais quoi seasoning, you might try sage. Stuffing is one of the very few preparations that people find sage 'normal' in. (We have an organic herb farmer coming to dinner so I'm expecting to get a really good haul of sage, savory, and probably some exotica that I've never heard of.)

[15] You're likely right. I have no business predicting what he likes >;) Comfort food? Yeah, I agree. I'm not big on healthy or exotic cuisine as they tend to be pricey, and there seems to be no good answer to that dilemma except to make more money. You show me a blueprint, I'll show you a healthy king of industry...

I love sage, and stuffing is the best place to use it. It's easy to over and underdo the sage, so I have to be careful.

oh man, this is *hilarious*! i'm sorry i missed it. crazy busy and still have tons to do before heading up to NY for t'day.

i wish i had more time to go thru this and post, but...i don't and the thread is prolly dead anyway...

well, my tv show partner chyll pretty much nailed the turkey. i'm not super set on stuffing, either way. i never went near it as a kid and it wasn't too prevalent as a kid. there are sooo many foods that are always brought up that are 'normal' that i don't eat. usually makes me feel bad. no one ever put stuffing in that category.

looks like something i would like. i know nothing about the different recipes or what can go in it. in more recent years, as i've gotten - shall i say, "daring" - i've quietly taken a scoop and placed it on my dish.

i'll take a taste. there have been some i've liked quite a good bit and others that are just blech. i haven't a clue what's in there that makes me like it or not. perhaps i'll ask about it thursday, but most likely i'll just imbibe a whole lotta beer! : )

i don't usually like the big thanksgiving spread. i usually just eat a bunch o' bird - dark meat, drowned in a ton of gravy. my brothers' sister-in-law usually makes soup and i *love* soup. so i'll fill up on that.

ultimately, i can go either way on stuffing. i don't love it or hate it; know much about it or have strong feelings, either way. i guess it would be good to know how i like it, then have it every year.

sorry if i disappointed anyone! ; )

[18] He did that on purpose, just to spoil everyone's predictions.