Observations From Cooperstown: Nix, Nunez, Garcia, and The Mystery Man

The Yankees’ decision to sign journeyman Jayson Nix to a make-good contract might end up as inconsequential, or it might be a harbinger of a larger transaction to come. A utility infielder who can play both the infield and the outfield, Nix looks like he’s part of the Triple-A backup plan, but I wonder if there is more at work here. There have been rumors that the Braves and Yankees are talking about a deal that would send Eduardo Nunez to Atlanta as part of a package for Jair Jurrjens. If the Yankees do trade Nunez, they will need a new utility infielder. Ramiro Pena is clearly not the answer, and the organization has shown no confidence in minor league veteran Jorge Vazquez.

What kind of a player is Nix? He had a miserable 2011, hitting so poorly and striking out so frequently for the Blue Jays that they released him in mid-season. But he does have some power–he hit 26 home runs combined for the White Sox and Indians over the 2009 and 2010 seasons–and can play third base, second base or shortstop, in addition to the outfield corners.

So should the Yankees trade Nunez? He has loads of natural talent, but is very raw, and must find a way to cut down on his throwing errors. He could be a very good utility infielder, ala Randy Velarde or Luis Sojo, but I don’t know if he has enough patience at the plate to be an everyday player. In the meantime, Jurrjens is a very effective right-handed pitcher who has been good in three of his four full seasons. He’s a strike thrower who won’t turn 26 until January, with the one concern being his ability to stay healthy. If the Braves would be willing to part with the native of Curacao in exchange for a package of Nunez, Brandon Laird, and a middling prospect, I’d have to give some serious thought to such a trade…

The Yankees’ wise decision to re-sign Freddy “The Chief” Garcia should not be interpreted as a sign that they will not pursue additional starting pitching; rather it’s part of a plan to stockpile as much pitching depth as possible for a long season. The reliable Garcia is an insurance policy, a No. 5 starter under a worst-case scenario, and possibly a long reliever. The Yankees still plan to pursue pitching via both the trade and free agent routes. If they can add someone like Mark Buerhle (free agent) or John Danks (trade), the rotation will look like this:

3) Buerhle or Danks or someone else

Under this scenario, Garcia would start the season out of the bullpen and would be available as a long man and spot starter. The Yankees could then give Hector Noesi some more time to develop as a fulltime starter at Triple-A Scranton/Wilkes Barre. With Noesi, Dellin Betances and Manny Banuelos at Scranton, the Yankees would have exactly the kind of young pitching depth that Brian Cashman desires as mid-season insurance. But the plan depends on adding a starting pitcher of some pedigree, something that Cashman has not been able to do since signing Sabathia in 2009… 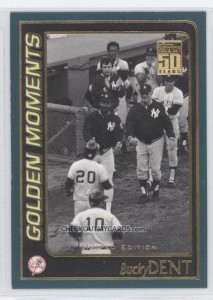 Over at The Hardball Times, I’ve been writing a series of baseball card mysteries where I ask readers to assist me in identifying players on cards. One of the cards has proved particularly vexing: the 2001 Topps Golden Moments card featuring Bucky Dent’s historic home run against Mike Torrez. I’ve been able to identify most everyone on the card. There’s Dent himself (wearing No. 20), who’s being trailed by Chris Chambliss. The welcome wagon of congratulation includes Yankee trainer Gene Monahan, backup catcher Cliff Johnson and manager Bob Lemon (all in jackets). Behind Lemon is Jay Johnstone, the veteran backup outfielder. Behind Monahan is Willie Randolph, who was injured and unavailable to play in the tiebreaker game against the Red Sox.

That leaves one mystery man. Who is the player to the right of Randolph, the one right next to the gold Topps logo? Among our readers suggestions have been backup outfielder Gary Thomasson, first baseman/DH Jim Spencer, and backup catcher Mike Heath. Still others claim that this player has no number on the back of the uniform, which leaves open the possibility that it is not actually a player, or not a player who was eligible for that game against the Red Sox. Could it be a ballboy or a batboy?

Who in the world is it? At this point, I really have no idea. Perhaps someone at the Banter knows.

Bruce, I'm going with batboy. In Stan Fischler's wonderful book about the '78 season "The Comeback Yankees" there is an almost identical photo taken from a position slightly to the left of this vantage point. The guy in question appears to be quite a bit shorter than Willie, which rules out Thomasson (my initial guess); and Spencer appears in the book photo off to the right. Mike Heath is a possibility I suppose - any way to know if he was in the dugout that day?

Who is Karim Garcia? I don't know a whole lot about Jair Jurrjens, but I do know Jeter's not getting any younger. Plus, decent hitting shortstops with a little pop do not grow on trees. I think Nune6 will get his throwing issues under control at some point, and Atlanta's pitchers tend to shit the bed in the Bronx.

The person in question definitely has no number on his back, but if it's the bat boy, the Yankees had two that day. When Dent fouls a ball off his shin before the HR, Mickey Rivers sends over a different bat, which is delivered by different kid, who is also seen in several shots patting Dent on the back as he jogs toward the dugout.

Good morning BB - [3] hey William, how about three batboys? At http://www.thedeadballera.com/TeamPhotos/1978Yankees.jpg - there is a '78 team photo, taken late in the year (Thomasson & Johnstone are in, Klutts & Eastwick are not) featuring three batboys. The middle one, Jim Plattner, looks like he could be Bruce's mystery man.

[4] Great find! I am 99.99% certain Jim Plattner is the mystery man. Sandy Sallandrea is the batboy who gave Bucky Dent the new bat.

The famous Jim Plattner! I never would have come up with that guy, that's for sure.

jurrjens - i've enjoyed watching him pitch in atlanta. but he's had shoulder and knee issues already, plus he can't strike out batters to save his life. i don't think his stuff would translate to the junior circuit at all, let alone the AL Beast. dude couldn't even strike out mark reynolds.

and if you're looking for a 'warrior' type of pitcher with a lot of "chutzpah", jurrjens most definitely is NOT your guy. nice #4 guy on the bravos, but i don't want him on my team...

[7] Who you jiving with that kosmic debris? I mean, is that a real poncho, or is that a Sears poncho?

[8] it's actually a Yankees poncho from Modell's!