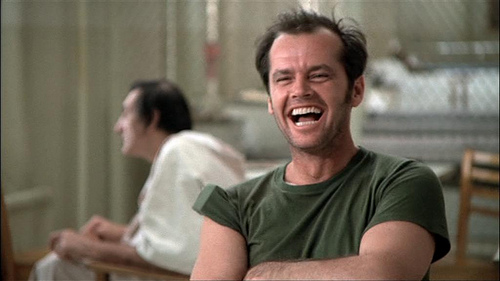 From the collection “When The Lights Go Down,” here is Pauline Kael on Jack Nicholson in One Flew Over the Cuckoo’s Nest:

Nicholson is an actor who knows how to play an audience; he knows how to get us to share in a character. In The Last Detail, his sweet-sadastic alternating current kept us watching him, and we followed his lowlifer’s spoor through Chinatown. Nicholson is no flower-child nice guy; he’s got that half smile–the calculated insult that alerts audiences to how close to the surface his hostility is. He’s the people’s freak of the new stars.

…Since Nicholson doesn’t score when he plays unmagnetic characters–and he must it by now–the danger in Cuckoo’s Nest is that he’ll take over: that he’ll use his boyish shark’s grin, the familiar preening, brutal one-upsmanship. He’s won the audience with his cocky freaks, and this is the big one–the bull goose loony. Nicholson can be too knowing about the audience, and the part he plays here is pure temptation. Before Kesey went to Stanford to study writing, he’d gone to Los Angeles in the hope of becoming an actor, and role-playing is built into McMurphy’s character: he’s swept up by the men’s desire for him to be their savior. Except for the red-haired-giant externals, the authority-hating hero of the book is so much of a Nicholson role that the actor may not seem to be getting a chance to do much new in it. But Nicholson doesn’t use the glinting, funny-malign eyes this time; he has a different look–McMurphy’s eyes are father away, muggy, veiled even from himself. The role-playing is still there, in the grandstanding that McMurphy does when he returns to the ward after shock treatment; it has to be there, or there’s no way of accounting for why he’s sacrificed. But Nicholson tones it down. As McMurphy, he doesn’t keep a piece of himself out of the character, guarding it and making the audience aware that he’s got his control center and can turn on the juice. He actually looks relaxed at times, punchy, almost helpless–you can forget it’s Nicholson. McMurphy is a tired, baffled man, and with his character more unresolved he gains depth. [Director, Milos] Forman hasn’t let the McMurphy character run away with the picture, and it’s Nicholson’s best performance.

And from the same book:

Despite his excessive dynamism (and maybe partly because of it), this satirical actor has probably gone further into the tragicomedy of hardhat macho than any other actor. He exposes cracks in the barroom-character armor and makes those cracks funny, in a low-down, grungy way. With his horny leers and his little-boy cockiness and one-upmanship, he illuminates the sources of male bravado. His whole acting style is based on the little guy coming on strong, because being a tough guy is the only ideal he’s ever aspired to. This little guy doesn’t make it, of course; Nicholson is the macho loser-hero. (In an earlier era, Nicholson would probably have played big guys.)

good insight into a great actor. and, of course, an epic film. Martini, legend.....