Color By Numbers: Show Me the Money 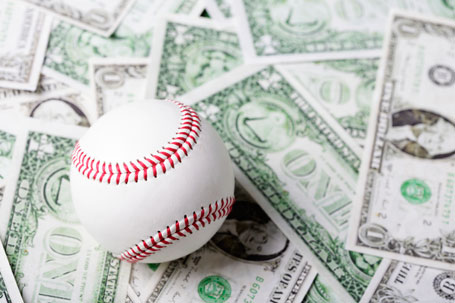 Alex Rodriguez stood alone as baseball’s only $200 million man for a decade, but now he has company. In the last six weeks, the fraternity has tripled with the addition of Albert Pujols and Prince Fielder. However, Arod still remains firmly planted atop baseball’s all-time salary totem pole.

If anyone was going to top Arod’s $27.5 million average annual salary, it seemed as if Albert Pujols would be the man. However, the new Angels’ first baseman “settled” on a contract that will pay him $24 million over the next 10 years, meaning he not only fell short of Arod’s current deal, but also failed to topple the contract Rodriguez signed with the Rangers in 2001. As a result, the Yankees’ third baseman seems to be a good bet to remain the highest paid player in baseball history for several more years.

Only two other players have had a longer reign as baseball’s all-time highest paid player. Babe Ruth remained atop the financial heap for 29 years, a period that began when he first joined the Yankees in 1920 and continued until 1949, when Ted Williams finally surpassed the $80,000 earned by the Bambino in 1930 and 1931. After the baton passed from the Babe to the Kid, Williams carried it for another 17 years until Willie Mays finally claimed the throne. Between that point and Arod’s mega-$252 million deal in 2001, the title of highest paid player repeatedly changed hands like a hot potato, with some players claiming the distinction for only days. Note: Records for the period before Babe Ruth are not as complete. Salaries represent average annual contract values with bonuses included. In some cases, actual contract values may have been higher or lower based on interest/inflation adjustments and performance incentives. The highest paid designation was awarded to the player with the top average annual salary before the start of each season.
Source: archival newspaper accounts

Because of Ruth’s immense talent, his salary almost became a defacto ceiling for future players’ demands.  In addition, the depression and World War II played a role in keeping players’ ambitions in check, as did the imposition of salary limits by the government’s Wage Stabilization Board during the early-1950s. Although players like Ted Williams and Joe DiMaggio finally surpassed the Babe’s benchmark and broke the $100,000 plateau during this period, it wouldn’t be until the mid-1960s when salaries started rise again.

In 1966, Willie Mays became the highest paid player in baseball history with a salary of $133,000, and then the dominoes started to fall. In the 1970s, a new player became the top man in almost every season, but in 1975, Catfish Hunter put them all to shame. After the 1974 season, Hunter discovered that Athletics’ owner Charley Finley had failed to fund an annuity as stipulated by his contract, so he claimed a breach and was eventually awarded free agency by an arbitrator. Fresh off four consecutive 20-win seasons, Hunter became the subject of a bidding war that was eventually won by George M. Steinbrenner. Hunter’s average contract value of $750,000 (his salary was much lower because of annuity deferments and other consideration) set the stage for the era of free agency that came to a crescendo when Tom Hicks handed out a whopping $252 million contract to Alex Rodriguez 25 years later.

For how much longer will Arod remain baseball’s salary king? This winter, Pujols and Fielder took their best shot at claiming the throne, but came up short. And, with more and more young superstars opting to sign long-term extensions before reaching free agency, it could be awhile before someone surpasses Rodriguez’s average annual salary of $27.5 million (which could wind up being even higher if certain milestone bonuses are achieved). Then again, with baseball enjoying unprecedented economic growth, maybe a $300 million/$30 million man is not that far away?

I don't know. I think Alex is going to remain in this spot for a while. And the guy that beats him might be more dollars per year but won't have a 10 year deal.

I think we'll need to see 2 things happen. A player come up ver young, starting his service clock at 19 or 20. And that player cannot sign one of those contracts that are popular now that will buy out the first year or two of free agency. If the mega contract can span the 25-35 yr old seasons, then some team might do it.

If I had to guess, I'd say Mike Stanton has the best chance of breaking the bank. He is young, extremely talented, and plays for a team that may not be able to afford signing him to an early extension (esp. if this year's spending spree backfires).

The funny thing about A-Rod's second contract is that, relatively speaking of course, its quite team friendly in that its really front-loaded. Here is the progression of salary over the years:

4) Interesting. Though, as mentioned, A Rod's salary could be bumped up in later years if he makes certain bonus marks.

[4] Luxury tax implications aside, a back loaded contract is always more team friendly because of the time value of money. Front loading a contract is kind of like withholding too much money from your paycheck. When you get your refund, you think you made out better, but in reality, you've given the government an interest free loan.