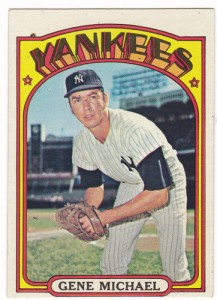 If you’re looking for connections between the current Yankee organization and the 1972 season, there are not many. Other than some minority shareholders and some old-time spring training instructors, there really is no one left from the 1972 days. Except for Gene Michael, that is. These days, he serves as one of Brian Cashman’s senior advisors, giving him advice on such newsworthy matters as the re-signing of the formerly retired Andy Pettitte. Back then, some 40 summers ago, Michael did his best to give the shortstop position the kind of defensive dignity it had lacked since the days of Tony Kubek.

Gene Michael looks a little bit surprised on his 1972 card, as if he isn’t quite ready for the snapshot taken by the Topps photographer. But it is most fitting that he is posed with a glove, for that was by far his best tool as a player. Michael really couldn’t run very fast, and he couldn’t hit a lick, though he did have enough patience to coax a walk here and there. He certainly had no power, with a total of 15 home runs in ten seasons. But he could handle the glove. And notice how small that glove was. We’ve always heard that middle infielders prefer small gloves so that they can take the ball out of the glove quickly and make a fast throw to one of the bases, but that glove is really stretching the limits of that theory.

It‘s rather amazing that Michael established himself as the master of the bidden ball trick using that small of a glove. Where exactly did he hide the ball? In his shirt? Yet, Michael could pull that play better than anyone in history. Here’s what he would do. With the runner at second base assuming that the pitcher was holding the ball, Michael would casually sidle over toward the second base bag with his ball nestled in his glove. He would then place a decisive tag on the unsuspecting victim before making the ball readily apparent to the umpire.

It’s a play that major leaguers rarely use in today’s game–I can’t remember the last time I saw a second baseman or shortstop pull it off–but Michael did it with a stunning degree of frequency. According to the official records, he executed the hidden ball trick at least five times. Considering that the hidden ball play relies on surprise and deception, it’s remarkable that Michael was able to execute it more than once or twice.

By the time that Michael had refined the hidden ball trick, he was well established as a Yankee. But he did not start out in the organization, instead coming up through the Pirates’ system. Signed by the Pirates in 1959 after a standout career as a basketball player at Kent State, the six-foot, two-inch Michael might have wondered at times if he should have signed with one of the NBA teams that wanted him. “Stick” rode the minor league buses for seven seasons before finally making it to the major leagues in 1966, when he was already 28.

Though he was unusually tall and lanky for a shortstop of that era, he impressed the Pirates with his fielding and his range. His hitting was another story. A .152 batting average in 33 plate appearances will discourage a coaching staff. After the season, the Pirates had a chance to upgrade the position by acquiring Maury Wills, so they did just that. They packaged Michael with power hitting third baseman Bob “Beetle” Bailey, and sent them to the Dodgers for the mercurial Wills.

Michael didn’t hit much better for the Dodgers, who evaluated him for one season before deciding that he couldn’t play every day and selling him to the Yankees in a minor transaction. He entered the 1969 season with a chance to become New York’s No. 1 shortstop, but his bat remained quiet, limiting him to 61 games. Then came the best offensive outburst of his career. He lifted his average from .198 to .272 and cemented himself as the first-string shortstop.

He never came close to hitting that well again, but the Yankees didn’t seem to mind, as long as he gobbled up groundballs like a Hoover, showed a knack for heady plays, and turned his share of double plays with second base partner Horace Clarke. Steady and smooth, he remained the Yankees’ regular shortstop through the 1973 season. In 1974, he lost the job to Jim Mason. That winter, the Yankees, believing they had a capable replacement in Mason (boy, they were wrong on that one), released Michael. He later latched on with the Tigers, where he filled a role as a utility infielder for one season before being released. 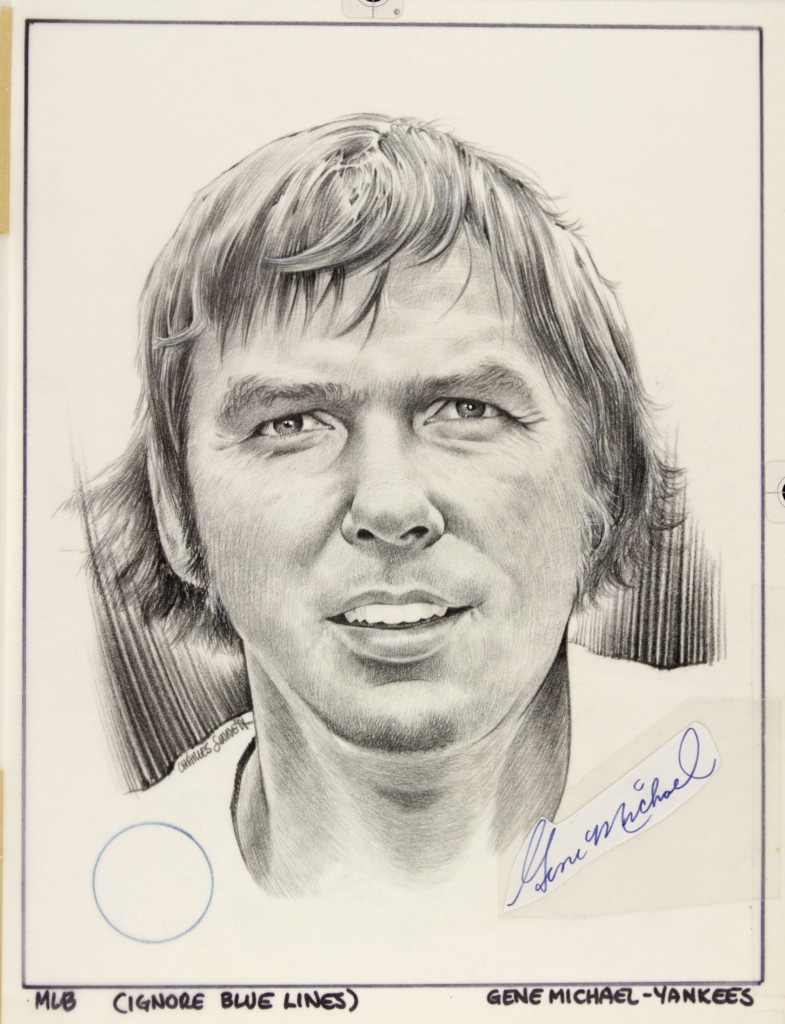 It’s not particularly well remembered, but the Red Sox gave Michael a spring training invite in February of 1976. Michael stayed with the Red Sox through late May, but never actually appeared in a game for Boston before drawing his release. That’s why you won’t find Michael listed as a Red Sock in his entry at Baseball-Reference. The release not only ended his Red Sox tenure before it began, but it ended his well-traveled career.

While Michael’s playing career was unremarkable, it was after his playing days that he established his genius in the game. Michael’s intelligence had always impressed George Steinbrenner, who hired him as a coach and then as a manager, before making him a part of the front office. He then spent some time as manager with the Cubs, where he was criticized by Dallas Green for not being tough enough, before coming back to New York. In the early 1990s, the downtrodden Yankees, having hit one of the worst stretches in their history, turned the task of rebuilding the franchise over to Michael.

As a general manager, Michael didn’t bring much flash or showmanship. With his extremely deep voice and chopped manner of speaking, he wasn’t particularly engaging in interview settings; in some ways, he was the antithesis of Billy Beane (or Brad Pitt). While Michael didn’t know much about glitz or self-promoting, he knew what he was doing in putting a team together, while still emphasizing the Sabermetric principles of on-base percentage and defensive range. He placed an emphasis on player development, which included the drafting or signing of such cornerstone players as Pettitte, Mariano Rivera, Jorge Posada and Derek Jeter. He patiently waited for the right trade to come his way. On Election Day 1992, he made his signature move by trading Roberto Kelly to the Reds for Paul O’Neill. The trade changed the look of the lineup, while bringing an intensity, a property that had been sorely missing, to the Yankee clubhouse.

It’s unfortunate that Michael was fired as GM before he could see the benefits of his labors. The 1994 strike didn’t help matters either. It’s possible the Yankees would have advanced to the Series that ill-fated year, in what turned out to be Stick’s second-to-last season at the helm.

And those who know the game realize the importance that Michael had in laying the foundation for the success of the late 1990s and early 2000s. He deserves credit, just like Cashman and Bob Watson. Not bad for a guy who didn’t see the major leagues until he was 28.

Thankfully, Michael remains part of the Yankee organization today. I feel a lot better about things knowing that Gene “Stick” Michael is still around.

He stored it in another dimension before it was bidden into ours.

Stick is a Yankee great in his own way.

I remember the Stick well. He couldn't run the bases at all, as he seemed to lope, rather then run, with as much vertical movement as horizontal movement. But at SS, he was very smooth, and had great hands, although not much of an arm.

I guess the Yankees from '66 to '72 were good for one thing: they gave players a chance to play MLB ball, who might not have otherwise had that opportubity.

I remember how Rizzuto would go crazy in the booth when Michael pulled off the hidden ball trick. We didn't have much going on in those days, so that was a real 'highlight' play.

Pepitone and Cater were decent at 1B, but man!.... did we have a pathetic infield otherwise.

4) Oh... did anyone see the film of Miggy taking a bad hop grounder to the eye? Pretty ugly. Welcome back to te hot corner!

Gene Michael is like Tom Hagen in The Godfather, not of the Steinbrenner family but essential to it.