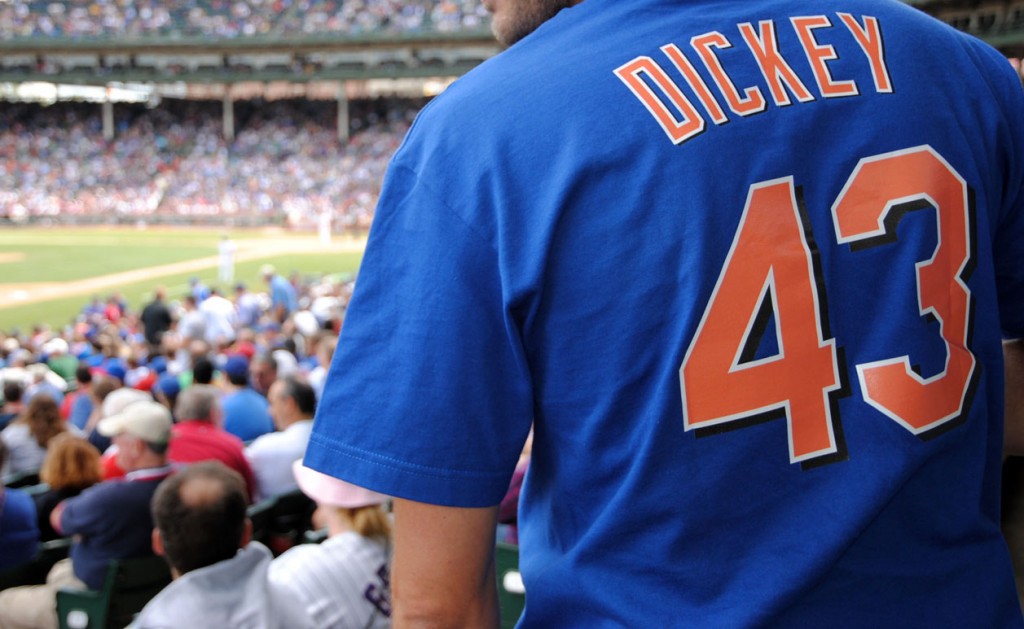 Wayne Coffey has a nice piece in the Daily News today about R.A. Dickey and my friend, the late Mike Gitelson. Mike died earlier this year from myeloid leukemia.

It is a touching story. Mike, who we called “Getty,” was my best friend in middle school. We collected comics, records, and pined for someone to take us to see The Rocky Horror Picture Show at the 8th Street Playhouse. Getty did not care about sports. At all.

My mother once took a group of us to Yankee Stadium for my birthday to see the Angels because Reggie Jackson was my favorite player. We sat in the bleachers. Mike made a placard at home and brought it with him. It read: Reggie Sucks. During batting practice, Reggie shagged flies near us and Getty waved the placard and yelled at him. At one point, Reggie turned in our direction, grabbed his crotch and spit on the ground. Getty whooped and laughed, his mission accomplished.

He was a political kid. Both of Getty’s parents were social workers and so he came by his left-leaning attitudes naturally. (I remember him railing about something once when we were in high school. We were  in the car with his father, who was a funny guy, and his dad said, “Michael, you are the only socialist I know with a bank card.”) By the time we were upperclassmen in high school, Mike had gone through the Clash and the Sex Pistols and was listening to the Dead Kennedys and Jello Biafra. He was the only guy we knew who was into the Red Hot Chili Peppers and Fishbone and Bad Brains.

His senior quote came from a Chili Peppers song: Don’t be a slave/No one can tell you/You’ve got to be afraid.

Getty was an angry kid (then again, so was I). He couldn’t wait to get to college. We had a falling out by then and I didn’t talk to him again for more than twenty years. But because we still had some of the same interests, I ran into him periodically: at a rest stop in New Jersey in 1994 or ’95 on the way home from a Mumia Abu Jamal demonstration in Philadelphia; at Fat Beats, a hip hop record store in the village; in ’96, on the night the Yankees won the Whirled Serious, at a De La Soul/Fishbone concert at Roseland; on the subway platform of the Carroll Street station in Brooklyn. I approached him at the rest stop after the Mumia Abu Jamal rally and startled him. It was clear that he didn’t want to reconnect so the other times I saw him–“Getty Sightings”–I left him alone.

I was surprised, then, when he reached out to me about five or six years ago. We exchanged e-mails and whatever hard feelings that might have existed were gone. We didn’t see each other but touched base every now and then. Mike had become a baseball fan through his wife who was–and is–nuts for the Mets. I thought that was amusing coming from a guy who loved to ridicule overpaid, conceited jocks.

Mike suffered with Crohn’s and he died too young. Go figure that baseball would provide distraction and comfort for him. His encounter with R.A. Dickey was moving. You know, when we were kids, Getty laughed in the movie theater at the end of Terms of Endearment when everyone else sobbed. During The Breakfast Club when the kids bared their souls and the theater was quiet, Getty cackled.  He was allergic to sentiment. But after R.A. Dickey called him on the phone, Mike cried. And I think he’d very much appreciate Coffey’s article.

Yet another reason to pull for Mr. Dickey who sounds like some kind of mensch.

Nice story Alex, and my condolences to you on the loss of your friend. I thought highly of R.A and even more so now. We're all just regular guys here on Bronx Banter and I'm sure he'd be one of us if he wasn't a Met.

1) Any knuckleballer is welcome here.

The more I read about Dickey, then the happier I get for Met fans for having someone like him on their team. He's a great guy and he's given Met fans a ton of joy, and in a season where they were supposed to have very little (allegedly).

Alex my condolences. Very happy you were able to play an integral part in this sad but at the same time very uplifting story.

3) Thanks. It was sad. Even though the guys I used to hang with in high school didn't keep up with Mike, it was one of those Big Chill moments in a way. Not only a loss that brought us back to our childhood but one that was a reminder that we're all closer to death and that illness can--and will--select us at random.

Mike's wife I've never met but I have spoken with her and exchanged many e-mails. He was lucky to have her, and she loved him very much. I'm pleased he found that kind of happiness and love in his short life.

What a great story, Alex. Thanks for sharing with all of us.

This really puts some shit in perspective. Thanks for the write up.

He did a thing for the MLB Fan Cave back in May where he watched people throw wiffle balls in Tompkins Square. I went there with my Mets fan coworker. Eventually Dickey started pitching, which wasn't on the agenda. (My Mets fan friend immediately started sweating that Dickey was going strain a lat or something.) I was lucky enough to take about eight pitches from him, one of which I managed to go the other way on. Here's a video of one of the following pitches:

He leaves me hanging like a jackass in the official MLB vid, but I can't blame him since the whole scene was a little awkward with the producers running around telling everyone what to do.

Hard to judge a man honestly by an web promo experience or through baseball media, especially in NY, but he does truly seem to be a real mensch.

I'm just a sentimental fool I guess, I love these kind of stories.