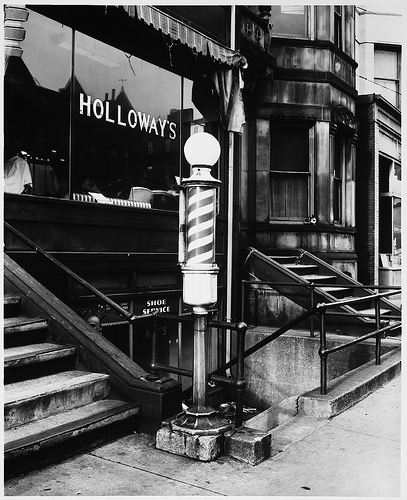 Last night I sat in a barber’s chair in the Bronx. The rain had stopped. There was one customer in the place, the sound of an electric razor buzzing filled the room. So did the voice of one of the barbers. He sat in his chair, feet propped and talked into his cell phone.

My barber smiled and looked at me in the mirror. Maybe he thought I understood Spanish better than I do but I didn’t need to know what was being said to understand he was arguing with a woman.

“His girlfriend?” I said?

While the buzzing and the arguing continued to the right of me, I heard Vin Scully’s voice coming from the television set to the left of me. The Dodgers and Phillies were in extra innings and the game was on the MLB Network. Vin sounded tired. So did the crowd. I remembered The Simpsons episode when Homer goes to a game and doesn’t drink: “I never knew baseball was so boring.”

But it was boring in a soothing way. Soon, the buzzing stopped and so did the arguing. The room felt still in that heightened way of quiet that occurs sometimes just before you fall into a deep sleep. The only sound was Vin’s voice. I felt calm and happy.

haha. that rain was no joke yesterday.

barber shops are interesting places. i used to take my friend's son to the barbershop to get his haircut. always interesting but a little strange for a woman to be there.

"Last night I sat in a barber’s chair" - you will NEVER hear me utter those words, haha! barber shops are completely nightmarish for me : )

actually, last time i went to a "salon," was 7 years ago; i chopped over a foot of my hair off to donate to "locks for love." it had to be done at a certain place. it was a mitzvah, but really traumatic for me, so no more of that!

1) Yeah, in most of the barber shops I've frequented there's a big macho culture there. It's not that women aren't allowed but the vibe generally shifts when a woman is present.