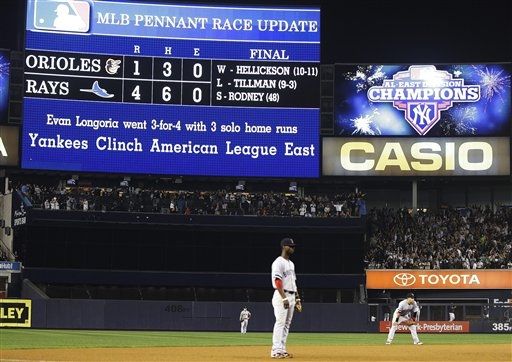 Holy shit that was great.

Hey, I don’t mean to be greedy but in name of superstition and not fucking with a good thing if you are available to recap tomorrow’s game that’d be awesome. If not, totally understand and no problemo.

That was probably the most calm extra inning Red Sox game I’ve ever experienced. I just never felt like they were a threat to score.

I wish I could have felt the same.

Dude, such a HUGE game for our man Hiroki tonight. I want so badly for him to do well.

Not to jinx him, and he might be a little gassed right now, but he’s going to rip through these guys pretty easily. They really have few decent hitters in that lineup. And the Yankees are going to destroy whatever comes their way.

That would make me very happy.

I had one of those nights tonight. Laundry and the Yankee game is a full slate at this time of year. A visit from the sore throat fairy, weird and time consuming things happening with credit cards, and then to top it all off, at 9:30 PM my wife gets an email that her very important 8:30 AM flight (she’s presenting at a conference) has been cancelled and she’s been rebooked to Friday. All the turmoil and panic floating around here, and not one ounce caused by the Yankees.

After a season on the brink, the Yankees gave us one night off. And it was glorious. Take a couple of days now and watch the Orioles and the Rangers in Stress Fest 2012, ie the Wild Card game. There sure was a lot of stress involved trying to avoid the stress of that game.

Another 95 win team. Another American League East Division crown. We’ve criticized this team more than most other Division champions, and often deservedly so, but there were times when they deserved more praise than we gave them I think. Like we were holding it back because we weren’t really sure how good they were. Turns out they were pretty damn good. 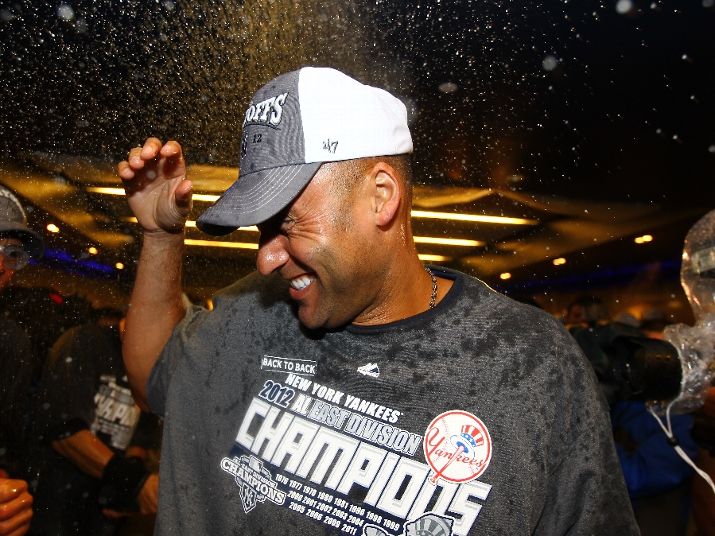 stupid Girardi death watch is finally off for good reason.
Best record in the toughest division in baseball, duh.
Fuck yes! Didn't figure this team for 95 wins in March. Who did? Liar!

This has been the most exasperating Yankee team in years, so it's rather remarkable they won the division with all that went wrong.

*Pineda didn't throw a single pitch. Rivera missed most of the season.

*Sabathia, Pettitte, Nova, and Robertson all spent significant time on the DL.

*The team couldn't hit with RISP, couldn't come back in the late innings (at least until late in the season), didn't run the bases well, and didn't play particularly well in the field.

How exactly did they win 95 games? Maybe the rest of the league isn't that good. Or maybe the Yankees have more talent than we think.

we also had the best run diff in the league and are one of only 2 teams in MLB to score 800+ runs.

i know we have home field advantage, but have to open on the road. does that mean we bat in the bottom half of the inning in ball-tumor/tex-ass?

2) or maybe Girardi isn't such an idiot after all. You don't navigate through a season like this, with a result like this if you"re a fool manager. Other teams have come almost this far with far less talent, but their managers are no better than Joe G.

However they go there, they got there. That's worth more than all the RISP fails. And we get to rest up before the first round.

BTW, did any one see B.J. Upton's possibly last exit in Tampa Bay. Maddon took him out for a pinch runner so the fans could say good-bye. Dude was crying like a baby. Big tears. Powerful stuff.

[1] I'm not convinced the death watch is off, especially if the Yankees get drummed out in the first round, but you're probably right.

BTW, was the AL East the toughest division this year? You could make a case for the AL West.

[2] How did they Win?
The BENCH! Chavez, Ibanez, Ichiro, Nunez
with a nice helping of: Andy
and a dusting of: Phelps
with a pinch of: FRANKIE BRAINS!

A record number of HRs helped to overcome a season long RISPFail.

If Andy is not here, and Nova/Garcia gets all get those starts, we probably don't Win.
Chavez had a better triple slash then ARod, and a tremendous AB/HR rate.
Raul, who set an example of heart and hustle, didn't have tremendous overall numbers, but had some EXTREMELY clutch Hits.
Ichiro, with the smell of a PS in the air, was reborn, and contributed to a number of Wins.
Phelps, considering his age and use, was outstanding. If Nova/Garcia get those calls, we are probably not here now.
And Brains....
ONE critical AB, ONE hard fought walk and a bellyflop, puts us over the top.

In 2009, our ENTIRE starting offense had great years.
This year, just the opposite, with Cano and Jeter being the only starters who had a better than expected year.

This year was truly a 25+ man effort.
But the Bench/Phelps was the difference. They put us over the top.

[7] I should add, a surprisingly good year from Soriano.
[6] Frankly, with our currently injury plagued lineup (and I will include Teix and ARod in there, as they are not playing healthy), a quick bouce might well happen. We have enough horsepower to Win, especially if we see Old CC, solid Andy, and Good Hiroki. But mssing Gritner, Pineda, Mo and a healthy Teix/ARod is a big hit to take.

I think the fact that we won 95 games was a great accomplishment.

Starting w/ the 4 game sweep in Oakland, the team backed up a poor stretch of play with a ton of injuries. The result was a 19-23 stretch that took the wind out of all our sails.

6) yeah, you could make a case for the AL West being the tougher division this year. It's hard to compare them when you factor in the fifth team, Boston.

bottomline re: Girardi: I just don't see any justification for dropping him after he got 95 wins out of this team. I see him as more of an asset than a problem.

With a large lead in the standings, the Yanks held on and rallied in the end to keep the O's at bay.

This may have been a blessing in disguise although it made for some moments of indigestion for players and fans of the Yanks.

The hot team going into the postseason stand a better chance of running the table. There are exceptions to the rule (the 2000 Yanks come to mind) they had a horrible finish to the season and ended up losing their last 7 games of the season and still produced a WS title.

This team will now have a short break that their aging bodies sorely need, and then it will be back to business.

Not a fan of this playoff format where they have to be the visiting team in the first 2 games, but we just need a split and then take it back to the Bronx.

I am sure Cano was hoping the playoffs started today, as he has been friggen En Fuego!!!

I think the rest will help Tex heal, but he is also a guy who needs to get his swing back in the swing of things. I hope they keep him anywhere below the 5th spot.

Looking forward to seeing the roster, and happy that Gardner got a knock last night.

The Yanks took lots of knocks on their performance this year and deservedly so, but you have to be proud of how they finished. This is an old team and for them to fight until the end of the season and cross the first stage of the race is certainly to be commended.

Now lets hope for a 36 inning wild card game between the O's and Texas!

(12) Thanks Jeremy! I am not the wordsmith that Alex and Jon are, but I do my best.

I also used Knock for Gardner and Yanks took Knocks in the following paragraph. Trying to imagine if I were writing for the Post.