Thanks to the new dual wild card format, 10 teams have a chance at making it to the World Series. Of course, by late Friday evening, two clubs will already be making plans for next season. In any event, listed below is a breakdown of the playoff history for each team who will be vying for the 2012 MLB championship. From a historical perspective, this postseason resembles a roundup of the usual suspects. Five of the top six franchises in terms of playoff appearances are represented this October, including the Yankees, who will be making their 51st run at a championship. Among teams who entered the season with 20 or more playoff appearances, only the Dodgers and Red Sox failed to join the party. In addition to being long time October combatants, most of these postseason regulars have also been recent participants, with all but the Athletics having made a prior playoff appearance within the last two years.

Grouped together in the middle of the October roll call are the Tigers, Reds, and Orioles, three teams that have had varying degrees of more limited playoff exposure. Although Detroit has only made the postseason in three of the past 25 years, this season marks the first consecutive playoff appearance since 1935, when Charlie Gehringer and Hank Greenberg lead the Tigers to the championship. Cincinnati’s N.L. Central crown marks the franchise’s fourth October appearance since the last days of the Big Red Machine in 1979, but the team can boast two division titles in the last four years. Finally, the Orioles are not only making their first playoff appearance in 15 years, but also coming off their first winning regular season over the same span.

At the bottom of the totem pole is the Nationals, who are making only the second playoff appearance in franchise history and first since the strike shortened 1981 season when the team played in Montreal. What’s more, Washington D.C. will be hosting playoff baseball for the first time since the 1933 World Series.

The Texas Rangers contributed to Washington’s thirst for October baseball when the team played as the Senators from 1961 to 1971. Since its inception, the franchise has now made the playoffs only six times, but this year marks the third consecutive season of October action in Arlington. Of course, after blowing a big division lead, the two-time defending A.L. champs may not feel as is they’ve made the postseason until (and if) they advance to the ALDS against the Yankees. 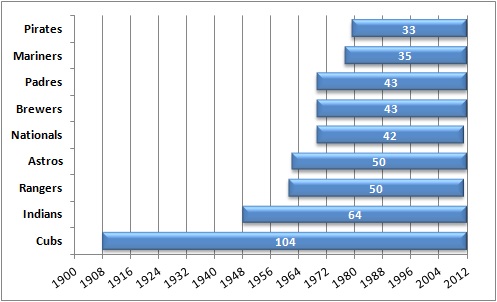 There are several intriguing World Series match-ups that could result from the field of playoff participants. The Yankees versus Cardinals would feature a showdown between each league’s most successful franchise, while a match-up between the Yankees and Giants would provide a historical nod to the glory days of baseball in New York. If the Nationals and Rangers square off, it would ensure the first championship for one of the franchises. Between them, the two teams currently have 92 fruitless seasons (only three Fall Classics have featured two teams with a longer combined dry spell), so if they meet in the World Series, one of the longest current droughts would come to an end. The Nationals versus Orioles would constitute a very unlikely “Battle of the Beltway”, while the Athletics and Giants would reprise the “BART Series”. However it shakes out, if October turns out to be as exciting as September, baseball fans are in for quite a treat.

In the nothing-to-talk-about-Dept,
here is what the ESPN 'experts' predict for the WS Winner:

So I'd say no clear favorite.