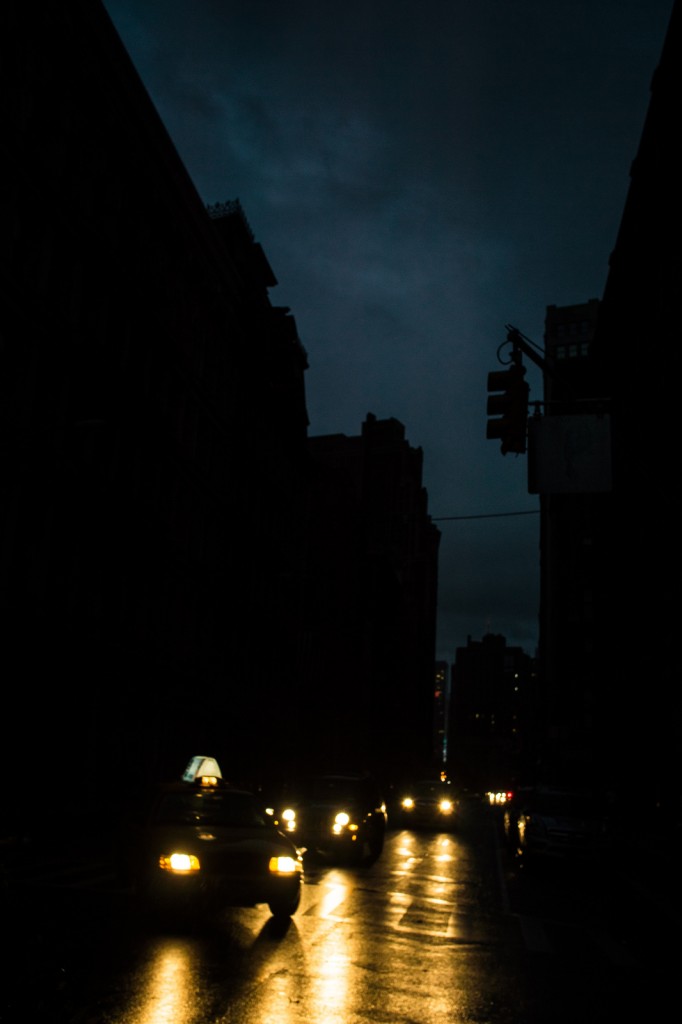 Waiting to cross the street last night in my neighborhood, guy walks up next to me, late forties, early fifties. We see a car nearby looking to park. Guy says to me, “He’s not going to find a spot. I just came around the block, nothing, drove around again and found one. I always have luck since I came here.”

I ask where he’s from and he says California.

“I always find a spot and after the hurricane people would be waiting hours for gas, I went, twenty minutes I was done.”

He was bragging. The light turns and we cross the street.

“Well, it’ll come around and even out,” I say. “Karma does that.” I don’t mean to use to word Karma but that’s how it comes out.

“No, I’m a good person so I’ve got nothing but good Karma. That can never touch me in a bad way. Just remember if you are a good person you’ll always have Karma on your side”

I thought of saying something else but let it and him go.

This from a book-length interview Bono gave to a French journalist Michka Assyas a number of years ago:

Bono: at the center of all religions is the idea of Karma. You know, what you put out comes back to you: an eye for an eye, a tooth for a tooth, or in physics; in physical laws every action is met by an equal or an opposite one. It's clear to me that Karma is at the very heart of the universe. I'm absolutely sure of it. And yet, along comes this idea called Grace to upend all that "as you reap, so you will sow" stuff. Grace defies reason and logic. Love interrupts, if you like, the consequences of your actions, which in my case is very good news indeed, because I've done a lot of stupid stuff.

Bono: That's between me and God. But I'd be in big trouble if Karma was going to finally be my judge. I'd be in deep shit. It doesn't excuse my mistakes, but I'm holding out for Grace. I'm holding out that Jesus took my sins onto the Cross, because I know who I am, and I hope I don't have to depend on my own religiosity.

Assayas: The Son of God who takes away the sins of the world. I wish I could believe in that.

Bono: But I love the idea of the Sacrificial Lamb. I love the idea that God says: Look, you cretins, there are certain results to the way we are, to selfishness, and there's a mortality as part of your very sinful nature, and, let's face it, you're not living a very good life, are you? There are consequences to actions. The point of the death of Christ is that Christ took on the sins of the world, so that what we put out did not come back to us, and that our sinful nature does not reap the obvious death. That's the point. It should keep us humbled . It's not our own good works that get us through the gates of heaven.

Assayas: That's a great idea, no denying it. Such great hope is wonderful, even though it's close to lunacy, in my view. Christ has his rank among the world's great thinkers. But Son of God, isn't that farfetched?

Bono: No, it's not farfetched to me. Look, the secular response to the Christ story always goes like this: he was a great prophet, obviously a very interesting guy, had a lot to say along the lines of other great prophets, be they Elijah, Muhammad, Buddha, or Confucius. But actually Christ doesn't allow you that. He doesn't let you off that hook. Christ says: No. I'm not saying I'm a teacher, don't call me teacher. I'm not saying I'm a prophet. I'm saying: "I'm the Messiah." I'm saying: "I am God incarnate." And people say: No, no, please, just be a prophet. A prophet, we can take. You're a bit eccentric. We've had John the Baptist eating locusts and wild honey, we can handle that. But don't mention the "M" word! Because, you know, we're gonna have to crucify you. And he goes: No, no. I know you're expecting me to come back with an army, and set you free from these creeps, but actually I am the Messiah. At this point, everyone starts staring at their shoes, and says: Oh, my God, he's gonna keep saying this. So what you're left with is: either Christ was who He said He was the Messiah or a complete nutcase. I mean, we're talking nutcase on the level of Charles Manson. This man was like some of the people we've been talking about earlier. This man was strapping himself to a bomb, and had "King of the Jews" on his head, and, as they were putting him up on the Cross, was going: OK, martyrdom, here we go. Bring on the pain! I can take it. I'm not joking here. The idea that the entire course of civilization for over half of the globe could have its fate changed and turned upside-down by a nutcase, for me, that's farfetched.

Alex, the guy sounds like a total fucking twit. I wonder what he would have done if you called him an asshole. See how good he really is.

[1] Farfetched. Really? Bono's from the UK, perhaps he heard of man named Hitler.