The Mighty Reggie Has Whiffed vs. Reggie’s Revenge 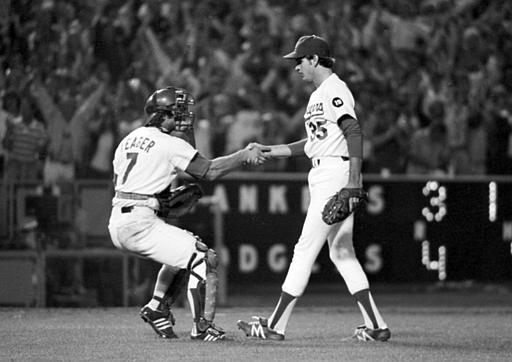 The Yankees and Dodgers are scheduled to play a two-game series in the Bronx starting tonight (if the weather permits). Nice job by SI.com’s Jay Jaffe today recalling the 1978 World Series and Game 2’s classic final out when Bob Welch whiffed Mr. October. Featured is the following take on “Casey at the Bat”:

The outlook wasn’t brilliant for the Yankees in L.A. The score stood 4-3, two out, one inning left to play. But when Dent slid safe at second and Blair got on at first Every screaming Dodger fan had cause to fear the worst. For there before the multitude — Ah destiny! Ah fate! Reggie Jackson, mighty Reggie, was advancing to the plate.

Reggie, whose three home runs had won the year before, Reggie, whose big bat tonight fetched every Yankee score. On the mound to face him stood the rookie, young Bob Welch. A kid with a red hot fastball — Reggie’s pitch — and nothing else. Fifty-thousand voices cheered as Welch gripped ball in mitt. One hundred thousand eyes watched Reggie rub his bat and spit.

“Throw your best pitch, kid, and duck,” Reggie seemed to say. The kid just glared. He must have known this wasn’t Reggie’s day. His fist pitch was a blazer. Reggie missed it clean Fifty-thousand throats responded with a Dodger scream. They squared off, Reggie and the kid, each knew what he must do. And seven fastballs later, the count was three and two.

No shootout on a dusty street out here in the Far West Could match the scene: A famous bat, a kid put to the test. One final pitch. The kid reared back and let a fastball fly. Fifty-thousand Dodger fans gave forth one final cry… Ah, the lights still shine on Broadway, but there isn’t any doubt The Big Apple has no joy left. Mighty Reggie has struck out.

Also buried by Welch’s sensational performance in Game 2 was when Reggie got his revenge in Game 6.  The Yankees were up 3 games to 2 and leading in the 7th inning by the score of 5-2 when Jackson faced Welch again.

This time he hit a long home run–they didn’t call him Buck Tater for nothing–the icing on the gravy of the Yankees World Series win.

What an enjoyable article, and with an equally great video clip!

Reggie was drama personified - and as great as the Yankees have been over the past 18 seasons, there really hasn't been anyone like him (for better and/or worse.)

As I replayed the ferocious swing and subsequent bat-flip after his revenge HR over again a few times (ok, more than a few times) I was caught by the thought that Reggie's showmanship is exactly the thing I counsel my boys to avoid - telling them to be humble and to "put your head down and run" when hitting a HR.

But, man - as a young fan, I loved Reggie's swagger, and would even practice his patented swing and bat toss...