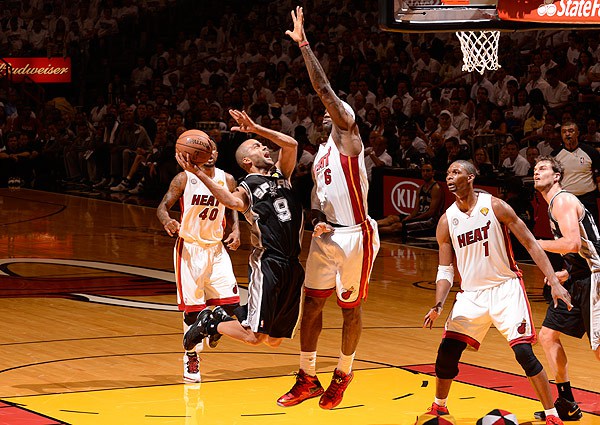 The ballgame in the Bronx was called tonight. They’ll make like Ernie Banks and play two tomorrow (1 p.m. and 7 p.m.).

Meanwhile, there’s Game 6 of the NBA Finals. These two teams have been trading bolo punches all series so logic would have the Heat winning tonight and forcing a deciding game. They’ll put up a good fight but it says here that the Spurs win their 5th title. I’m rooting for them though part of me wants to see a Game 7 for the pure drama.

Anyhow, enjoy the evening you guys.

I like James and Wade, but I appreciate the Spurs as a whole, so I'm rooting for Game 7 and let the chips fall where they may.

End it tonight, Spurs. To hell with Miami.

Man Ginoboli needs to make those!!

Chalmers a big plus so far for Miami.

When Tony Parker visited the US for a basketball camp as a teenager the directors, at the end of the week, were trying to pick an all-star team. It came down to two players for the last spot. Someone made the argument that the kid from France was good but no one would ever hear from him again.

Man I love this Robin Thicke commercial, how does he know I want it?

Duncan is killing! LeBron better take over in the 2nd half..

12) I wouldn't count on it. The Spurs are throwing everything at him and he isn't canning his open looks. Everything, drives and jumpers are too strong for Lebron. The Heat could come back but I doubt Lebron is going to go off.

One of the things that makes me less than a 100% engaged Banterer is that, with no malice, I don't give a shit about the NBA. So with the championship on the line tonight I'm tuning in to the only hour or so of hoops I'll watch all year, making myself the NBA version of the baseball dilettantes I make fun of in October.

So: This is very tough... I've decided to take my rooting talents to the Spurs cause, in honor of my San Antonian uncle who loves hoops enough for the both of us. I feel like it's going to give me my best opportunity to feel as if somebody with an ounce of humility won.

Last year, as a Celtics fan, I loved Ray Allen. Now he annoys me.

[15] Popovich and T.Parker have humility?

Duncan and LBJ are just phenomenal basketball players. Joy to watch these guys.

Wow, Lebron coming back to life late. Duncan looking a little tired but with 3 minutes left it is still anyone's game. Heartbreak and heroes coming up.

[19] Couild have guessed Manu would drop off this game but where is Parker? And what happened to LeBron's headband..?

I'm up too late for this shit man. Holy heart beating!

I love Van Gundy from his Knicks days but he's kind of an annoying announcer..where is Marv??

I'm sorry James can't give the ball up to Chalmers now. He needs to take--make or miss--the next couple of shots.

That Wade miss was awful.

Wow, those last two plays by Lebron were awful.

Keep it together, Spurs!

Brick and then Boom. But with 20 seconds left could be too late for Miami.

Wow..what an ending. 5-pt game, no chance now for the Heat!

Bollocks. Hope his foot was on the line.

Spurs blew it. No way they win in OT.

All my comments seem late..nbatv.com must be a few ticks behind the TV feed.

Missed free throws are as bad as popping up on a 3-0 pitch.

Welp, the Spurs will score here and go ahead leaving it back in Miami's hands...

40 seconds left the call is the Spurs win it.

What a play by Bosh.

Wow, that was a foul.

So I guess this is why they got Ray Allen.

Goodness. But slightly marred by that non-call against Manu.

Damn, I didn't know there was a game thread.
I couldn't sleep for hours after the game. That doesn't happen to me with baseball, unless it's the Yankees in the play-offs.